How we’ll watch the Rio Olympics in 5 charts

Four years is an eternity on the internet. Since the London Olympics in 2012 — the most-watched TV event in U.S. history — the landscape of social media has dramatically evolved.

Facebook and Twitter are going toe to toe with traditional media organizations, while Snapchat has grown into a live-streaming powerhouse. In turn, the number of social media users has shot up an additional 10 percent in the U.S. across all platforms.

“With every Olympics you’ll get the same headline: ‘It’s the most socially engaged ever’,” says Daniel Haddad, director of commercial consulting at sports marketing agency Octagon. “Having said that, they key viewing habits have certainly changed since 2012.”

With that in mind, here are five charts that break down how Rio will be watched in 2016 starting Friday.

The stay-at-home games
With the Zika virus looming large, flight bookings to the games are lagging. So much so, Rio has been branded the stay-at-home Olympics, with fewer visitors than when Brazil hosted the World Cup in 2014. But while people are less likely to be watching the games in-person, some things are the same as ever: Live TV is still king.

Despite the growing popularity of live streaming and social platforms, multiple consumer surveys have found that viewers will be favoring live TV over other platforms come August 5.

A recent survey from Allianz indicates that over 60 percent of consumers will be watching Rio on TV; just 8.5 percent plan to watch it online. Last on the list are the live streaming platforms like Periscope and Snapchat.

“There’s this doomsday prophecy that people will stop watching live sports on TV, but we expect audiences to be very high,” said Haddad. “Unlike drama or news, sport remains appointment to view.”

However, since 2012, the rise of so-called “second screeners” (people who use mobile devices while they watch TV) has been steep. Audiences may not be getting their live fix from social media, that doesn’t mean they won’t be using it.

Facebook takes the gold, Twitter the silver
The primary role of social media in Rio, as with other sporting events, will be a space for real-time commentary alongside highlights. Viewers will also use social platforms to find out when to tune in to live coverage.

“Less people will want to sit down and watch a whole event now,” said Haddad. “Instead, we’ll expect spikes in audience around key points in game. If all I care about is the moment when gold medal is won, I don’t have to sit and wait two hours for that to happen.”

But while Twitter is beefing up its Olympic tools, the echo chamber of choice will be Facebook.

“Twitter remains the place where things happen the second they do on TV. But it’s messy for long discussions, whereas Facebook is more sticky,” Haddad said.

Other sports that are big on dark social include cycling, rugby and golf.

YouTube’s long tail
But the Olympics, while lasting only two weeks, has a long digital afterlife. Platforms like YouTube house hours of highlights, mashups and playlists around

the event. Increasingly, this Olympics content is being viewed on mobile devices, too.

A recent report from YouTube found that 65 percent of its Olympic content is now consumed on mobile, with the top mobile-savvy country being Saudi Arabia (87 percent). 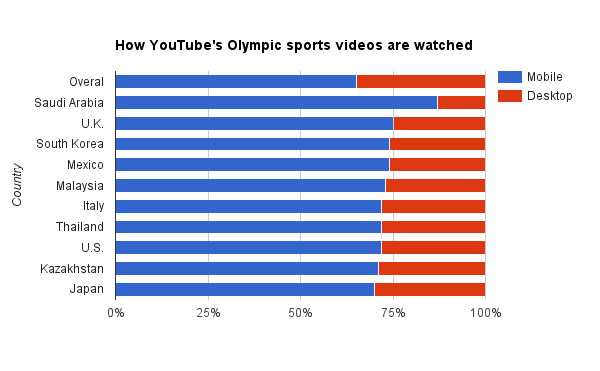