As subscriptions stall, Blue Apron is partnering with Jet.com 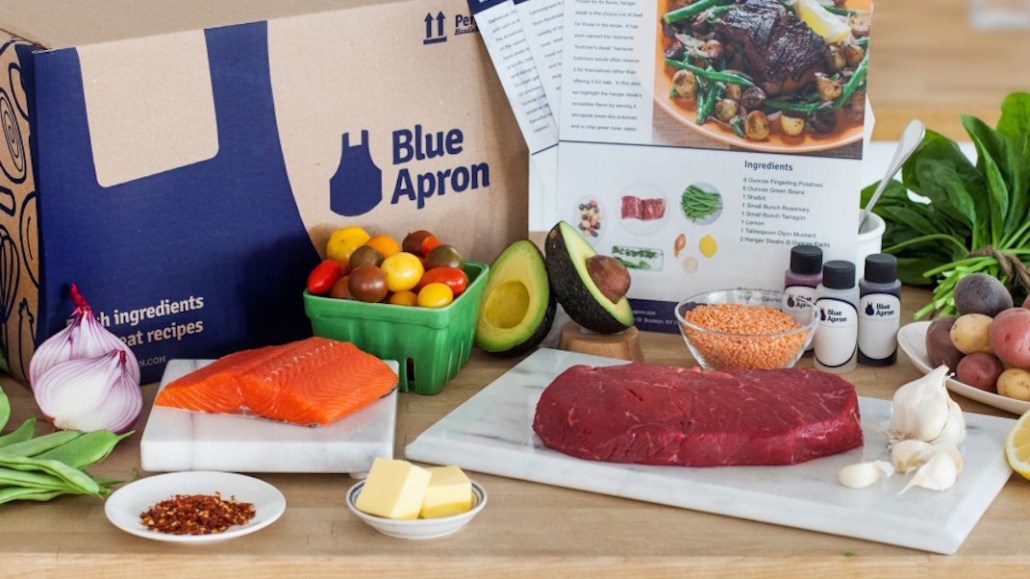 Blue Apron’s subscription business has hit a wall, landing the company in the arms of Walmart-owned Jet.com.

With Jet.com, Blue Apron is offering same-day or next-day delivery for individual meal kits, a break from its subscription service, for a fee of $5.95. Shares soared on the news, up nearly 20 percent by midday Monday. Terms of the deal were not disclosed.

The company, which has had a rocky financial year, has already added a new stream of business: selling customized meals individually, both online and in-store. Jet marks its first venture into same-day delivery for customers outside of its subscription service. It’s a shift in strategy to respond to problems that have long held the company back: an expensive supply chain and the high cost of advertising to acquire new subscribers.

Blue Apron isn’t just failing to attract new customers, it’s losing existing ones, too. Up against competitors such as HelloFresh, the company has seen steady declines in its customer base. In June 2017, the delivery service had 943,000 customers, a figure that steadily declined, with one exception, to the 717,000 it reported to the SEC in June.

Blue Apron CEO Brad Dickerson said the deal builds off a year-long internal push to diversify its revenue streams outside its core DTC model. The on-demand delivery service will initially be available in New York City, Hoboken and Jersey City, but Dickerson said the companies could expand to additional areas if all goes well.

“A lot of the things that we’re doing and saying right now are a lot of things we were saying earlier in the year about broadening to a non-subscription platform,” said Dickerson.

Blue Apron has made other recent moves to take in cash elsewhere: the company recently partnered with Grubhub and Costco. Grubhub customers can order a Blue Apron meal kit through the app, just like from their favorite Chinese takeout spot. And Costco customers can purchase the kits in-store.

Cara Brosius, an analyst at the Freedonia Group who studies the grocery industry, said increased competition in the meal-delivery space has reigned in expectations. One get-ahead method would be cutting costs, but that’s difficult to do on the home delivery side because of the logistical expenses, Brosius said.

Cost-cutting is possible by partnering with grocery stores, she said, because delivery services can piggyback off their established supply chains. Dickerson said the recent partnerships wouldn’t much move the needle on the price of Blue Apron meal kits. In defending the price uniformity, he noted that DTC customers have a “much greater variety.”

Blue Apron’s surging stock on Monday signaled renewed investor confidence, but the true litmus test comes during its November Q3 earnings report, when it will report its latest subscriber data. If the company can’t cut its spend and increase its customers, Brosius said an acquisition by a grocery chain or other company could provide the infusion of capital needed to get the company back on the right track.

“How they’re going to continue to survive is by doing what many of the companies are already doing,” sad Brosius. “Many of them are becoming acquired by larger retailers and forming partnerships with larger companies in the meal kit space.”

“There’s so many things that allow customers to have a day that is somewhat unpredictable,” said Echegoyen. “We wanted to allow for them to say, ‘You have ‘x’ amount of meals to do this week. How many do you want to cook from scratch? How many do you want something like Blue Apron?”