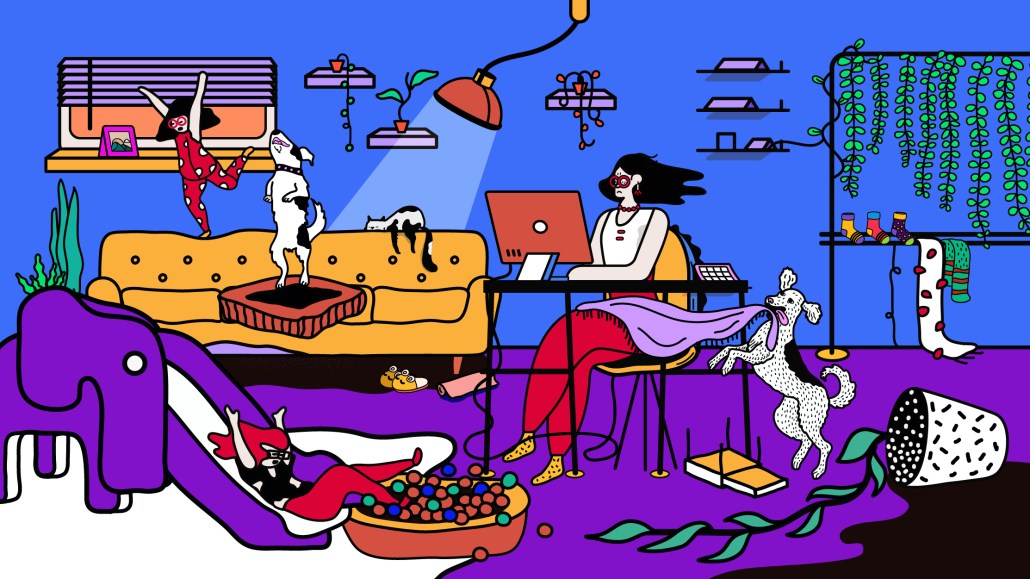 This past summer, employees at Chicago-based ad agency OKRP were told they could take their chairs, stand up desks and large screen computer monitors home on loan. With working from home the norm for the foreseeable future, the agency’s leadership realized that instead of sitting unused, the shop could lend employees equipment and furniture from the office to help improve employees’ work from home set ups.

“Many took us up on the equipment loaners,” said Rahul Roy, COO at OKRP. “People seem to love that. We handed out a bunch of desks and chairs.”

The agency also added a new perk: Employees who wanted to upgrade their home WiFi could do so and OKRP would foot the bill via a new stipend. OKRP isn’t alone in thinking about new perks or ways to help upgrade employees’ home offices. Other agencies like Marcus Thomas, Innocean and Eleven have either told employees to take office furniture or offer stipends to employees to better their work spaces.

Rethinking perks to include ways to make working from home better for employees is necessary, according to agency leaders, who say that even after the pandemic is finally under control — whenever that may be — employees will likely opt for a hybrid model of in-office and remote work. That means, how comfortably employees are able to work from home will matter more to managers that allow employees to do so going forward.

“Even past the pandemic, we realize that people are going to want to work from home a couple days a week or maybe permanently,” said Scott Chapin, COO of Cleveland-based independent creative agency Marcus Thomas. Aside from allowing employees to take office furniture home, the shop allocated a new $200 stipend for people to “buy whatever home office gear they might need,” said Chapin.

Adding a stipend to be used on sprucing up a home office set up or getting better WiFi is a way for agencies to “show we’re listening,” said Kirk Guthrie, svp and executive director of HR at Innocean. Early on the shop allowed employees to take office equipment and furniture home. Last week, Innocean issued a new stipend of up to $200 for employees. “We’ve all had our struggles with the internet,” added Guthrie. “This might afford someone the opportunity to upgrade their internet. Every little bit helps as you’re thinking about this.”

Given the likelihood of employees leaning toward a hybrid in-office and remote work set up in the future, Marcus Thomas leaders are trying to figure out “what the office of the future looks like,” said Chapin. “We’re doing experiments with multiple cameras and TVs to make it socially distanced, but feels like everyone is together. We’re figuring out how to re-engineer a conference room that can work well for the people who are there — and the people who are not there.”

Other agencies are also rethinking their offices. Some, like New York-based independent shop Good Apple are contemplating whether or not they are necessary. “We are going to work hard in the next year to understand exactly what this new work world looks like and how it impacts our agency,” said Al Muzaurieta, founder of Good Apple.

Muzaurieta added that “You may see us entirely abandon our physical office space and reimburse people a portion of their rent — who knows! We only guarantee that we are going to do things that create greater employee freedom and more client satisfaction.”

That said, building out a lavish home office isn’t a viable option for all employees, especially those who live in apartments with roommates, noted Caroline Mascarin, head of operations at London-based design agency Soon. That’s why Soon is maintaining its office space even as employees work remotely. Doing so gives employees the option to head into the office when their home is too noisy or their internet is too slow.

“Some companies make the assumption that everyone has space at home or that people have home offices,” said Mascarin, adding that’s not always the case in cities like London. “That’s why it’s important to have that flexibility, to have the office for people who need to go in.”