Why shoe retailer DSW is turning influencer content into ads 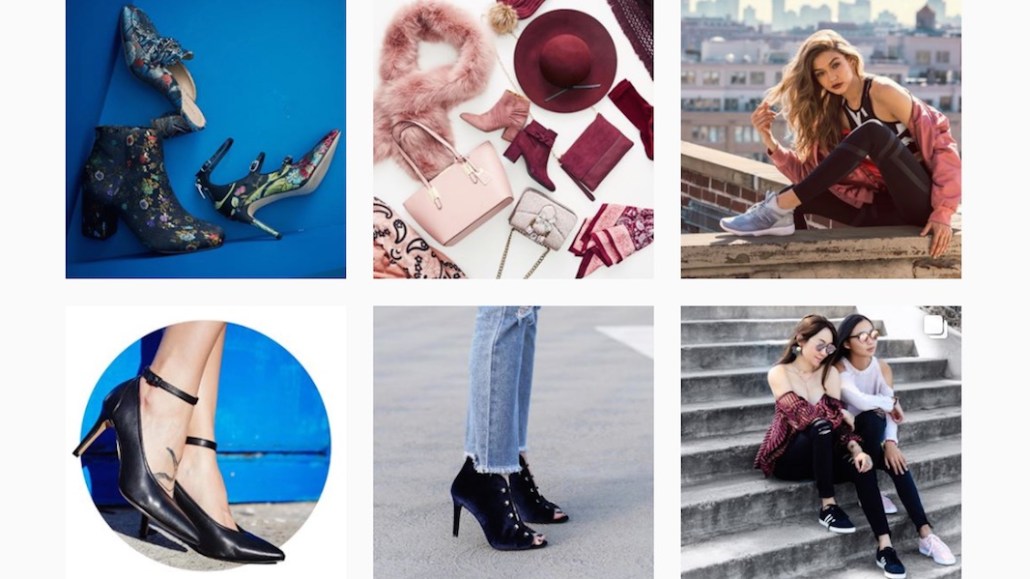 DSW is on a mission to standardize its influencer marketing strategy while making it a larger part of its digital marketing budget.

The shoe retailer has shifted to thinking of influencers as an extension of its store associates. It is now moving away from traditional influencer payment models with upfront fees or cost per engagement and experimenting with new incentives for influencers. The other big part of its strategy is more of a focus on “nano-influencers,” which have followings of under 80,000 — smaller than those of micro-influencers.

This year, DSW brought everything from strategy to execution under agency 360i and selected 287 influencers to put a focus on content and credibility, not reach. That process took five months. The idea was to cover topics close to DSW’s category, like fashion, but also expand to nano-influencers in lifestyle, fitness, health and motherhood. The brand took a seasonal approach: Each season, it worked with 360i to find influencers who fit the brand, love shoes and work with one of the storylines it wanted to tell.

The Columbus, Ohio-based retailer has increased its ad spend along with revenue: It spent $43.4 million on measured media in 2016, up from $29.1 million the year prior, per Kantar Media. DSW wouldn’t share how much DSW spends on digital or influencer marketing specifically.

“One of the things we like to do is use tone of the campaign at the time to find the right influencer and select them,” said Corey Martin, head of influencer marketing at 360i. For instance, if Instagram was a priority channel, it would find the influencers who made the right content on Instagram. “This is about core sustained advocacy building, not paying someone to advertise things,” said Martin.

The brand picked actress Olivia Culpo as a style ambassador, having her select five shoe styles that were closest to her personal taste. The agency would then maximize influencer content, whether from nano-, micro- or big-time influencers, and put money behind it to create ads online, do paid social, send emails and do programmatic media buys.

DSW’s push to rely on a wider swath of influencers reflects how brands are rethinking influencer marketing, seeking more standardization and more measurement options. The work didn’t bother placing emphasis on likes or engagement like comments, said Martin. “Those are vanity metrics.” But putting money behind influencer content can open up a whole new world of actual measurement, he said.

“We know influencers allow us to reach consumers in a more modern way,” said DSW CMO Amy Stevenson, “and in a way our customers want to be communicated to. People take recommendations of friends and family first, and you’re likelier to relate to nano-influencers.”

One example is DSW’s “March On Moms” program, part of a larger influencer campaign it did with 360i. Blogger Heather Avis was a nano-influencer 360i sourced to do posts about mothering hacks, reminding moms to “March On.” Another one is Naty Michele, a lifestyle influencer with 75,000 followers.

Here’s the thing: motherhood is no joke. It may be the only thing in my life that makes me feel completely out of control and utterly joyful at the exact same time. Someone asked me lately to share some of my mothering “hacks”, ways to make motherhood work. Well, let’s see, I don’t make lists, I don’t do pre-planned meals, I’m not good with charts and organization. In fact, I am the mom who often forgets to send my kids to school with a sack lunch on fieldtrip day. So my biggest piece of advice? Keep on marching! Motherhood is a one foot in front of the other, moment by moment, day by day kind of gig. Sometimes your feet land in the beautiful flowery fields, sometimes in the mud. But all the time every step is worth it. As part of my partnership with DSW this Mother’s Day we are reminding all the sweet mama’s out there to #MarchOn. It is my greatest piece of parenting advice! @DSWShoelovers