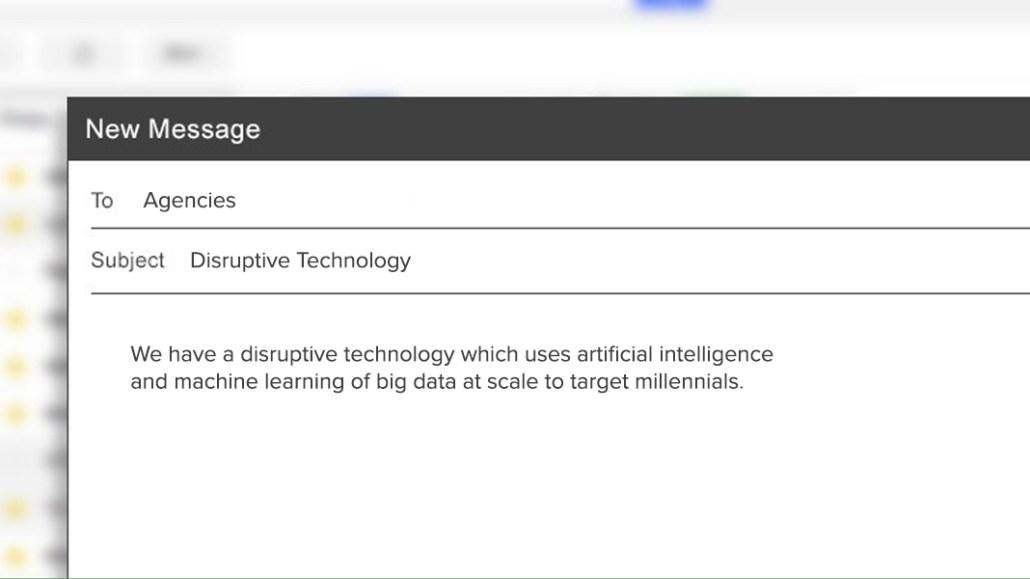 We get why ad tech vendors bombard agency executives with email pitches, boasting about their products. That’s how they make money and pay for a yacht at Cannes. But programmatic salespeople need to do better if they want agency executives to write them a check.

“Vendor pitches can be painful and obtrusive. Most times, vendor pitches go wrong when they don’t explain how they fit into the larger, holistic marketing ecosystem,” said Shiva Vannavada, chief technology officer at agency iCrossing.

Below are some of agency executives’ biggest ad-tech pitch pet peeves, ranging from grammatical errors to vague notes to the use of the phrase “artificial intelligence.”

Spelling and grammar
Poor spelling and incorrect grammar are becoming the norm among the midsize tech companies and ad tech startups that Nichola Perrigo’s team hears from. One recent pitch read “influencer” instead of “influencers” and used inconsistent capitalization. “We’d love to see the level of professionalism kicked up a notch,” said Perrigo, director of digital marketing for agency RPA.

Vague notes
Agency executives want to know how a tech vendor’s products can specifically help them solve problems, and phrases like “quickly track” and “optimize effortlessly” are not helpful. A media agency executive who spoke on condition of anonymity called the below email “one of the vaguest and most nonsensical notes we have ever gotten.”

Buzzwords
No one can define what artificial intelligence and machine learning are exactly, but almost every ad tech vendor seems to believe they’ll make their tech look better.

“It’s in almost every pitch I see,” said Eric Bader, managing director and co-founder for digital consultancy Volando. “Nobody is specific about what it is, but everyone is certain it’s going to change everything.” 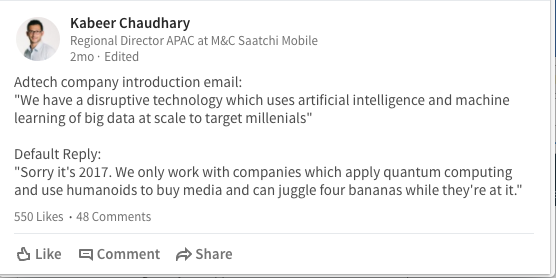 Chris Wexler, executive director of media and analytics for agency Cramer-Krasselt, agreed, adding that AI and machine learning could be swapped with the words “algorithm” or “proprietary technology” in some pitches. “It is the new vernacular for [vendors’] black [boxes] that they won’t explain,” said Wexler.

Irrelevant messages
Some ad tech vendors need to do more homework on their agency clients. Perrigo said tech vendors often request meetings with clients that RPA doesn’t currently have or has never had. One vendor recently emailed Perrigo, hoping to connect with a company called Slumberline that she never heard of. (We can’t find this company’s information online, either.)

Unsubscribe links
Agency executives may want to ban as many messages as possible from landing in their inboxes, but ad tech vendors like adding them to their email distribution lists without their permission. Perrigo said ad tech vendors seem to know they are spamming agencies, as they are now increasingly including links to unsubscribe right in their own signatures.