Cannes Briefing: The battle of the ad tech yachts

The ad tech flotilla has become a fixture of Cannes — and the growing presence of ad tech. Whether it is a sign of health or dubious spending is up for some debate. One ad tech firm founder, when asked why he isn’t getting a yacht, told me it was a “dick-measuring contest.” Another CEO who did have a yacht perhaps summed it up best: “I’m not a fan of the concept, but sales wanted to do it.”

Over 20 ad tech firms have yachts this year, including Nielsen Marketing Cloud, Teads and AppNexus. Even Rubicon Project, which has gone through painful cuts, is sporting a boat. Ad tech impresario and content marketing master Terry Kawaja hustled to the marina to gin up a handy ad tech map based on his (in)famous Lumascape industry charts.

There is a rough hierarchy in the ad tech flotilla. Some, like Nielsen and Teads, have their own yachts. But many ad tech firms share a boat, in a rare instance of competitors joining together for the greater good — or at least to make sure this sales boondoggle is within reason. Gabbcon, an ad tech conference series, is host to no less than four ad tech firms aboard the Princess AVK. Here’s a look inside: 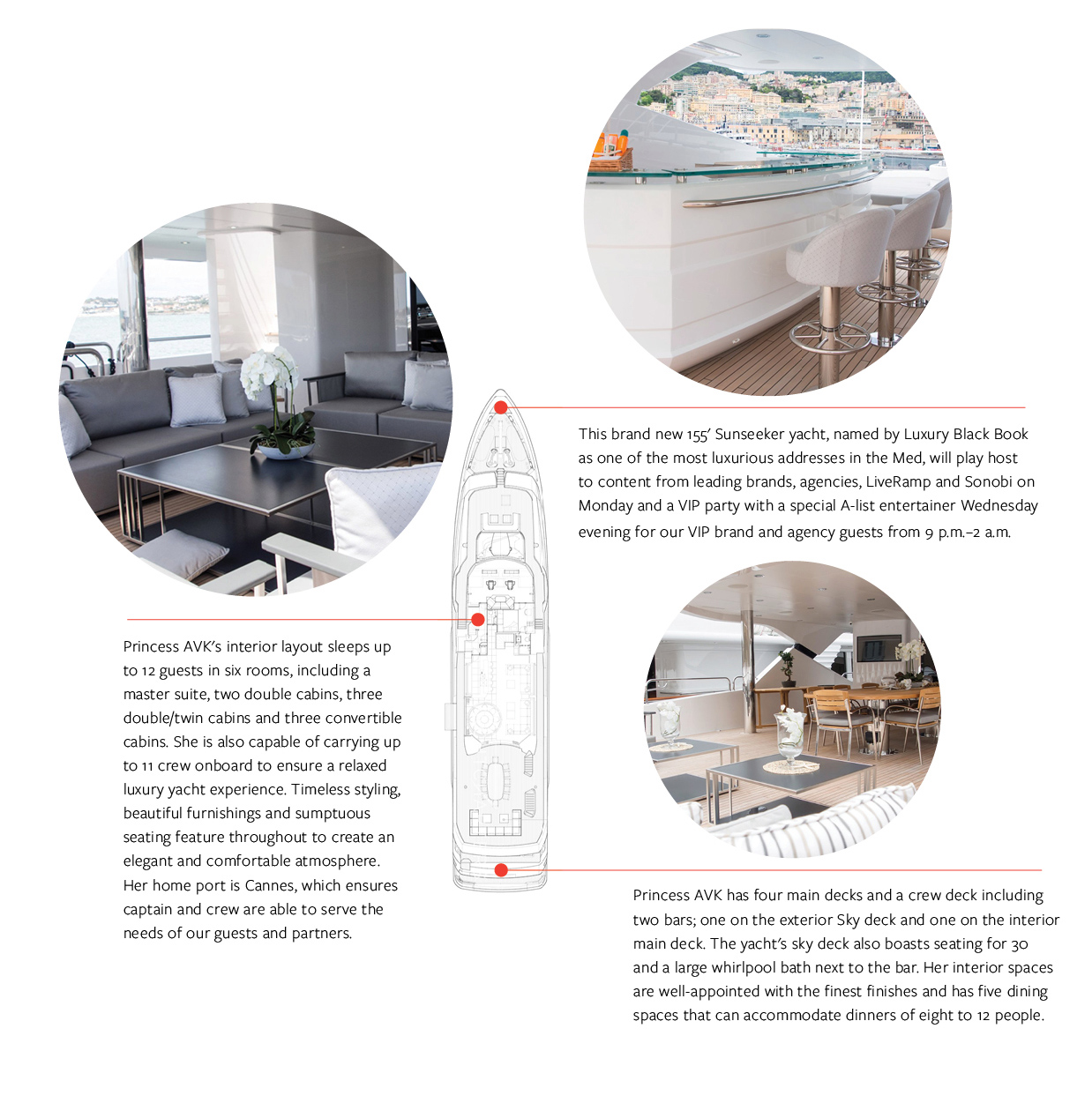 The case for the ad tech yacht is that several team members end up staying on board, and it becomes a place for nonstop meetings and, mais oui, the occasional cocktail party or even a full-blown party. (Nielsen is throwing a bash tonight on board its yacht.) Teads is setting up shop on the 131-foot yacht named Thumper and is having acoustic music sessions the first three evenings of the week.

As for cost, a yacht at Cannes can run up to $165,000 a week for something like the Thumper. Some might see waste, but Kawaja sees correlation to giant exits.

Ad tech is not alone in the harbor. The Wall Street Journal has a boat, as do VaynerMedia, Accenture Interactive and FCB. But a good 75 percent of the marina is ad tech of some form or fashion.

The problem, like all ad tech, is lack of differentiation. When everyone has a yacht, your yacht is not that unique. Mobile demand-side platform TabMo has a tugboat instead. Slow and steady often wins the race.

Quote of the day
“[Facebook] thinks they can engineer themselves out of the [brand-safety] problem that they engineered themselves into.” — Jesse Angelo, CEO and publisher, New York Post

Digiday Podcast (Cannes edition)
Amy Emmerich, chief content officer at Refinery29, swung by Digiday Cannes headquarters to talk about how everyone is in everyone’s business in media these days. Key quotes:

The Digiday Cannes Translator
Cannes has its own language. Here’s what people really mean.

“I’ll definitely stop by.”
Meaning: You won’t see me there.

“Let’s meet back home.”
Meaning: I never want to see you again.

“I’m running late.”
Meaning: I will show up in two hours, maybe; no promises.

“Sorry, I couldn’t get on Wi-Fi.”
Meaning: I’m avoiding you.

“My meeting is running long.”
Meaning: I regret agreeing to meet you.

“Can we push our meeting back?”
Meaning: I subsequently found someone more important to meet.

“Sorry, I have to run to a meeting.”
Meaning: You’re not important to me.

“Who are you with again?”
Meaning: I don’t want to talk to you.

About last night
The Cannes party scene kicked off in full force last night. Some highlights:

Reminder: Follow us on Instagram @digiday
We are creating a story each day with a special focus on the absurdities of Cannes.