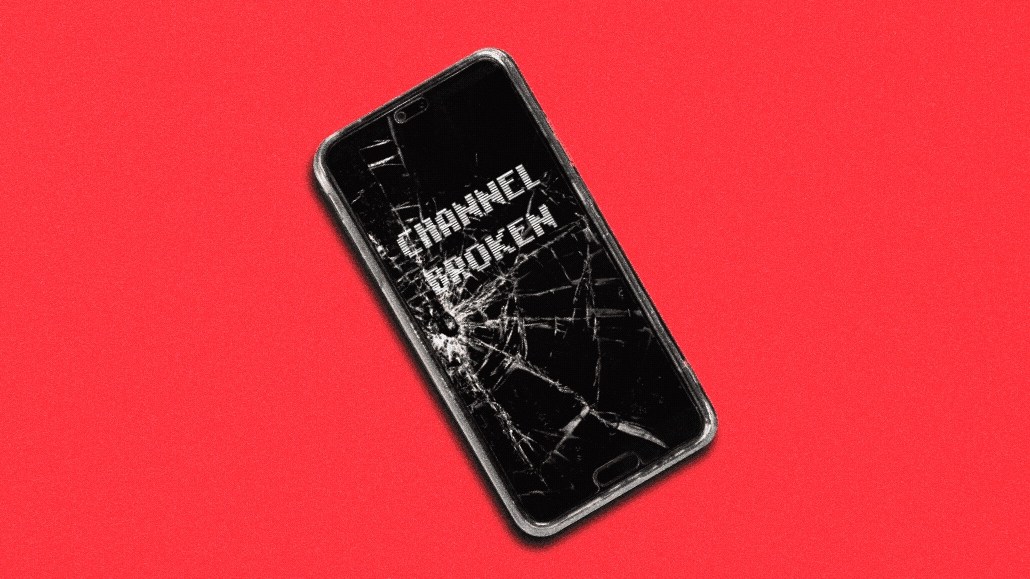 The public boycott of advertising on Twitter is starting to look a lot like a long goodbye.

GroupM, the world’s largest media buying agency, is telling clients that Twitter is now a “high risk” media buy following a barrage of controversies, U-turns and confusion that capped off Elon Musk’s second week as the owner of the social network.

The advice was shared in a document, seen by Digiday, that warns marketers of the risks of advertising on the volatile social network. It reads: “Based on the news yesterday [Nov. 10] of additional senior management resignations from key posts, high profile examples of blue check abuse on corporate accounts, and the potential inability for Twitter to comply with their federal consent decree, GroupM’s Twitter Risk Assessment is increased to a High-Risk rating for all tactics.”

If this stance is to change, Twitter has to resolve several issues, per the document. They are as follows:

It’s a reminder of where the real power lies in this standoff between Twitter and advertisers. Hint: advertising on Twitter has always been a nice to have, not a must have for the advertisers that spend on it. That may be one of the few things that hasn’t changed since Musk took over.

That’s not to say that advertisers are apathetic on Twitter’s fate. They’re concerned, of course — the social network still serves as a major cog in the global news cycle, after all — but they’re not rattled. Not even as Twitter’s senior ranks unravel.

The unraveling accelerated after Musk held an hour-long pow wow on the platform last week (Nov 10). It was done to reassure advertisers that Twitter’s future was fine. A series of sudden resignations and subsequent reversals of them revealed they were anything but. Not least because it involved some of the same people who have wanted the market to believe in Musk. Robin Wheeler, Twitter’s de facto head of ad sales, for starters. A little over a day after she was talking up Musk’s plans on Twitter Spaces, she resigned, and then decided to stay, per Bloomberg.

The symbolism isn’t lost on marketers.

“Corporance governance is shifting all the time,” said one senior marketer, who spoke on condition of anonymity because they were not authorized to speak to Digiday. “I can afford to wait and see how this all shakes out. This isn’t like Facebook or YouTube where we might structure media plans around those platforms. On the contrary, our organization is trying to call in any fungible spending right now. Thank you Mr. Musk.”

It gets worse. The other executive on that call with Musk and Wheeler — Twitter’s head of trust and safety Yoel Roth — also resigned. Unlike Wheeler, Roth doesn’t seem to have reversed that decision. Neither has Twitter’s chief information security officer and chief privacy officer, who have also resigned. Oh, and don’t forget all this is happening as the Federal Trade Commission watches on with “deep concern.”

So not only does Twitter pose a brand safety risk to advertisers, it could also be a cybersecurity risk too.

Either one would blow a hole in the ads business of any platform in the current climate — let alone one that most marketers aren’t too concerned about.

“Yes, Twitter is part of the cultural moment, but it doesn’t have a good direct response product so spending there is quite nebulous — or just not good,” said a media director at one of the advertisers that has stopped advertising on the social network. “It’s never been a critical part of the media strategies or plans that I oversee.”

Nothing Musk has said to advertisers either on stage, on calls or even his tweets has been able to change that sobering fact. In fact, the more the controversial billionaire talks about Twitter and advertising on it, the more confused advertisers seem to get.

The way Musk sees it, Twitter is like a town square where “freedom of speech is not freedom of reach”. In other words, people can say all sorts of things — some of it even unsavory — it just doesn’t necessarily have to get amplified to the masses.

The problem is who gets to decide what gets amplified? Whatever the answer is, chances are it’s going to be inextricably linked to pernicious relativism. It’s hard to see otherwise after Musk said he viewed the “truth is a nebulous concept”. Controversy is never far from views like this, and that’s the last thing marketers want to be near right now.

“Elon saying ‘truth is a nebulous concept’ at the start of the session is highly concerning,” said Ruben Schreurs, group chief product officer at media management firm Ebiquity. “This is Kellyanne Conway making a case for ‘alternative facts’ all over again. Truth is truth, simple as that. There’s nothing nebulous about it.”

Schreurs frustration echoes a lot of what the 15 ad executives Digiday has spoken to since Musk took have said. They bemoan a pitch to advertisers that’s light on core principles and permanently in a state of flux, or as amenable behind closed doors as it is combative in the spotlight. In short, marketers aren’t too bothered by what Musk says on Twitter Spaces, at conferences or behind closed doors. They only care about what he does.

“Speaking more specifically about our client set that potentially applies to an even broader group of advertisers, Twitter is not integral enough to their advertising mix to demand this much of their attention and time,” said Adam Telian, vp of media services at marketing agency New Engen.

Needless to say, those pulled ad dollars don’t look like they’re going to be coming back this side of 2023. Then again, they never really were. Advertisers had essentially cut short their spending for this year on Twitter. Nothing Musk has done so far has been able to convince them otherwise.

His new verification scheme? The indecision over it has allowed for fake and parody accounts to proliferate in its slipstream. What about Musk’s plan for Twitter to take another crack at video, or become a payments company or even re-architect the backend of its ad tech in order to power better targeting? Easier said than done at the company in the throes of an employee exodus. It’s the same with his threats. Remember, Musk’s vow to “thermonuclear name and shame” the advertisers that had pulled ad dollars? Still waiting.

“At a base level, Twitter’s reason for being is currently very unclear, as evidenced by his “we’re going to be everything” comments, making it a highly suspect platform to spend money on,” said Evan Levy, president at ad agency Fitzco. “We know TikTok’s reason for being. We know the NFL’s reason for being. Understanding the platforms or properties we’re investing media dollars into should be table stakes. Twitter? To be determined – and so should brands’ investment there.”

It’s a precarious position for any business built on ad dollars — even more so one that’s intrinsically entwined to Musk. His antics are having a direct impact on the business on multiple fronts. Not that he would know. Rather, Musk believes, as stated in meetings with advertisers, that his actions should be divorced from his business — even as ad dollars continue to pour out of it as a direct result of what he’s doing. Regardless of how he opts to try and prop up his flagging asset, the clock is ticking. The entrepreneur has already warned that his company won’t be able to come through the economic downturn if it can’t replace the ad dollars the business has lost since his arrival with additional income. Bankruptcy is not out of the question, he has said. Advertisers are a lot of things, charitable isn’t one of them.