Marketing in the age of Trump: How the LGBT Center created ‘F*ck Without Fear’ 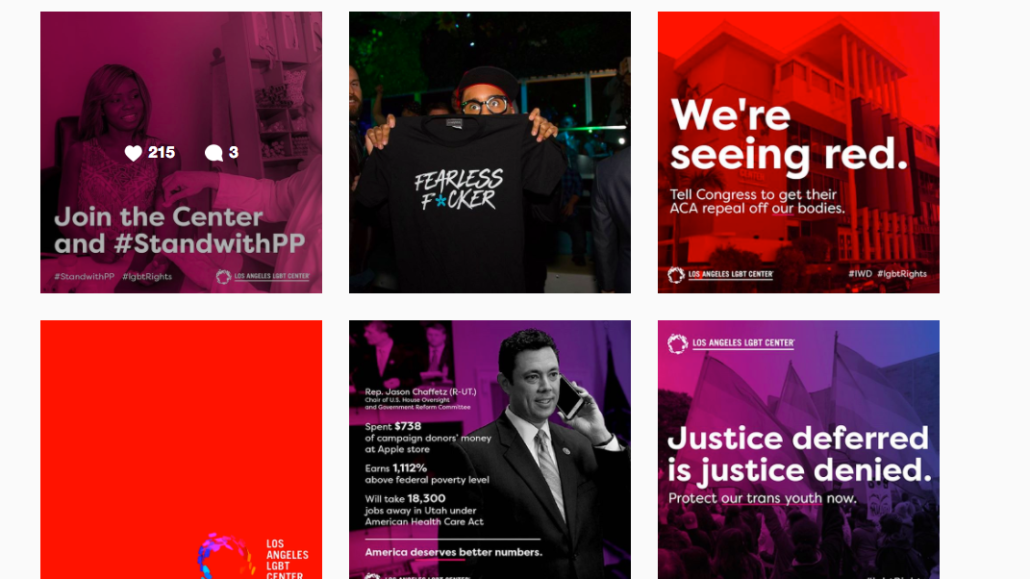 The new political atmosphere has breathed new life into the marketing strategy of the Los Angeles LGBT Center, the world’s largest organization for LGBT health and advocacy, which has been an unwittingly positive recipient of the increased attention to LGBT rights and political resistance in the United States since the election of Donald Trump.

While it wasn’t the reason for the campaign, the political atmosphere has been “top of mind” since January, when it launched F*ck Without Fear, a new digital campaign to promote the use of PrEP (pre-exposure prophlaxis), for people at risk of HIV who don’t have HIV — and increased interest in resistance gear, marches and issues has also contributed to its success.

The uptake of PrEP has been slow, and especially among the highest-risk group, gay men of color and transgender women under 24, there are misconceptions about efficacy, side-effects and cost.

On the search for something that would cut through the clutter, LGBT Center and its agency, Weber Shandwick came up with the tagline F*ck Without Fear. After holding focus groups to make sure it hit its mark, the company launched billboards, and a full digital campaign around the message. The campaign’s digital microsite let gay and bisexual men figure out if they’re a candidate for PrEP. Along with a social media push, it also bought ads on dating apps, including Grindr, Scruff, Jack’d and Hornet. The ads targeted men under 24. Since January, the Center has doubled the number of people who visit per month for prescriptions.

“The election has a huge impact on us as an organization,” said Key, who said that other than this campaign, the Center has , like other non-profits, seen an influx in cash, interest and volunteers: It now holds double the number of volunteer orientations it did a week.

The company has also used the new White House administration to push its other advocacy messages forward. On Inauguration Day, it launched “100 Days and Me.” “We have a lot more clients fearful of what will happen to their care, fearful about their rights,” said Key. The campaign monitors “threats” from the government to the community.

On social media, the brand has also changed its approach. Postings now focus on specific members of the government: A recent post on the account, which has 24,000 followers, is about newly appointed Supreme Court justice Neil Gorsuch and the threat a conservative court poses to gay rights. Others looked at the repeal of the healthcare bill and encouraged people to organize.

Other non-profits have made similar moves. The American Civil Liberties Union, for example, has seen an influx in cash and interest since Donald Trump took the White House. It has used the opportunity — and the money — to push its message on social media, from new mediums like Facebook Live to discussions with lawyers about Trump’s travel ban to new ways of using research reports.

For the LGBT Center, which has also found more people interested in its message — and swag (it now sells t-shirts reading “Fearless F*cker at the Andrew Christian store in West Hollywood) — the resistance has been in some ways the best marketing it could have had. “It bodes well for us, and the future of the resistance,” said Key.