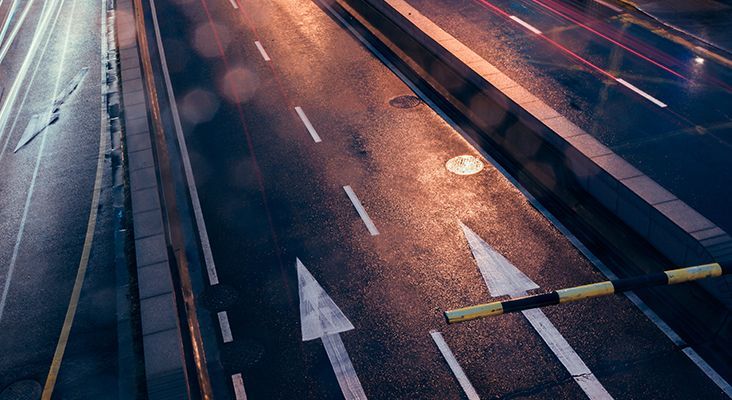 Everyone knows to keep their eyes on the road, but BMW created a way for drivers to actually be behind the wheel of a moving car while wearing a virtual reality headset that enhances the experience.

Last week in Lisbon, Portugal, the German auto giant debuted a way for people to drive the BMW M2 in real life while simultaneously wearing a VR headset that makes it look like they’re driving around a futuristic city rather than an empty parking lot. Instead of standing, sitting or walking like most VR experiences, BMW’s “M Mixed Reality” project lets people actually drive in real life — gas pedal, brakes, steering wheel and all.

It might seem dangerous to be behind the wheel of a sports car without looking through the windshield, but this wasn’t designed for normal streets; BMW designed it on the company’s test track, but the software can adapt and re-create the virtual course for carless locations around the world. (A BMW employee also rides in the passenger seat to watch the road and press an extra brake pedal in front of them if needed.)

In some ways, the concept was inspired by M Town, which was a digital city that BMW M created several years ago. Alex Kuttner — the BMW M engineer who came up with the idea for the VR experience — said fans have said they’d go to M Town if it were a real place, so he decided to try and make it.

“M Town is a mindset,” Kuttner said. “It’s a town where everything is possible, and that was the moment I realized we aren’t only here for selling products. We’re here for selling emotions and experiences. These two things combined in mixed reality are only the start of something really great in the future.”

When BMW began developing the mixed-reality project nearly two years ago, the company originally planned to develop it for the M5 model sports car. However, the company then decided to design it for the M2, which will be released in the spring. According to BMW executives, future uses could include training drivers, programming tracks, and developing global racing competitions that can take place all at the same time.

The idea was a chance to “give people room to explore new things without having to think about a business case from day one,” BMW M CEO Frank van Meel told Digiday. He said it also allows them to “have an answer” by developing the tech.

“I think the interesting thing is now we have an answer, and the question is, what is the question to this answer?” van Meel said. “There are so many ideas. We haven’t found the final answers, but we’re working on all of these kinds of ideas.”

The experience isn’t something for the masses — at least not yet — but BMW flew in several gamers and content creators to drive around the parking lot in VR. Among them was a gamer and Twitch streamer named Cailee, who also flew out to Munich to be a part of BMW’s teaser video for the experience. A member of the G2 esports team that plays the car-soccer video game Rocket League, Cailee said she’d played VR before, but “nothing this crazy.” She said she thinks other games would also see the appeal of it, both for fun and competitively.

“It’s just the most insane experience I’ve ever, ever had,” she said. “I play Rocket League, I’ve sunk so many hours into it and everything, but I really cannot describe the experience that I had in Munich.”

Last week in Lisbon, Digiday did a demo of the experience in an empty suburban parking lot outside the Portuguese capital where the world premiere was set up. Despite some VR experiences having a digital delay that gives people motion sickness or makes them feel less real, every action I made in BMW’s course perfectly matched how it felt to drive the actual car.

During the first lap through the digital metropolis,, I drove around slowly collecting coins and avoiding other obstacles along the way. On second and third laps, a time element challenged me to drive faster, creating the thrill of an actual race — and the real feelings that come with accelerating, taking sharp turns and braking. However, the virtual world allowed the suspension of reality, with each lap making me feel more comfortable about driving faster and taking sharper turns.

Turning the vehicle itself into a controller illustrates BMW’s interest in gaming, said David Hartono, creative tech director and co-founder of Monogrid. Just last month, BMW announced a new partnership with AirConsole to play games on the in-car display screen while the car is parked. He added that the VR experience helps “strengthen their image as a pioneer and avant-garde car in terms of technology.”

“It’s a masterpiece of mixed reality,” said Sean MacPhedran, senior director of innovation at the west coast-based independent agency SCS, who added that BMW’s project is a “cool step up” from how people already pay to drive luxury cars around a track. However, it also helps illustrate the company’s capabilities in a consumer-friendly way.

“With BMW doing so much work with mixed reality and industrial 4.0, it’s hard to telegraph that to a consumer,” MacPhedran said. “A consumer doesn’t care about all the stuff you’re doing to make a car that much better. It kind of reminds me of how they show the car in the wind tunnel, but now they’re doing this to show how advanced a car is.”

Over the past few years, a number of automotive brands have experimented with augmented and virtual reality. Last year, the luxury electric car startup Lucid uses VR in its New York City showroom to let people sit inside a virtual version of a car and see what various designs look like. Earlier in 2022, Audi and Porsche both announced in-car VR entertainment systems through new partnerships with the startup Holoride. Various car brands have also experimented over the past few years with designing cars using VR and other uses for augmented reality such as for repairs.

Many car companies look for ways to keep up with the pressures of technological advancement, but BMW has been more aggressive with taking risks, said Mike Ramsey, vp analyst for Gartner’s CIO Research Group. (He mentioned BMW was a pioneer in investing in multimedia systems and also early to integrate Alexa into vehicles.) However, he thinks the VR experience seems more about brand-building than finding a true business case.

“It’s one of those things that every single car company is investing in but nobody has figured out what the business value is,” he said. “Augmented reality, virtual reality, all of these technologies. For a company that has a performance-oriented orientation, they’re going to look at that as a way to expand their brand beyond the physical to wherever you travel, so to speak.”

What makes BMW’s experience unique is using real-life interactions with real-time sensors, said Heiko Wenczel, director of UE business for HMI and auto at Epic Games, which helped BMW design the experience. He added that being able to test and feel something in VR is a big benefit for designing real-life products.

“You can translate that into any part of the manufacturing and automotive world,” Wenczel said. “Like when you design you get real-time feedback automatically, like what that is, and the human scale of designing cars and like understanding what mobility will be in the future needs that kind of interaction in real-time.”

Instead of the “first impulse” companies often have to find a specific reason for developing something and how to make money from it, van Meel said it’s still helpful to start with some low-budget funding even without all the questions answered. Although BMW wouldn’t disclose how much it spent on the project, van Meel said it’s not “millions and millions of Euros.” He added that the budget was “quite lean” since it mostly required just a mixed reality setup and the computer in the car.

“If you take a step back and you say, well, it’s not finished yet, but I can see a lot of creativity and a lot of potential that is still a little bit unclear,” he said. “You just should let it happen if it’s not insanely expensive, of course, because then you need to make decisions right away.”

https://digiday.com/?p=475304
Most Read
Trending in Beyond Ads
Digiday Top Stories