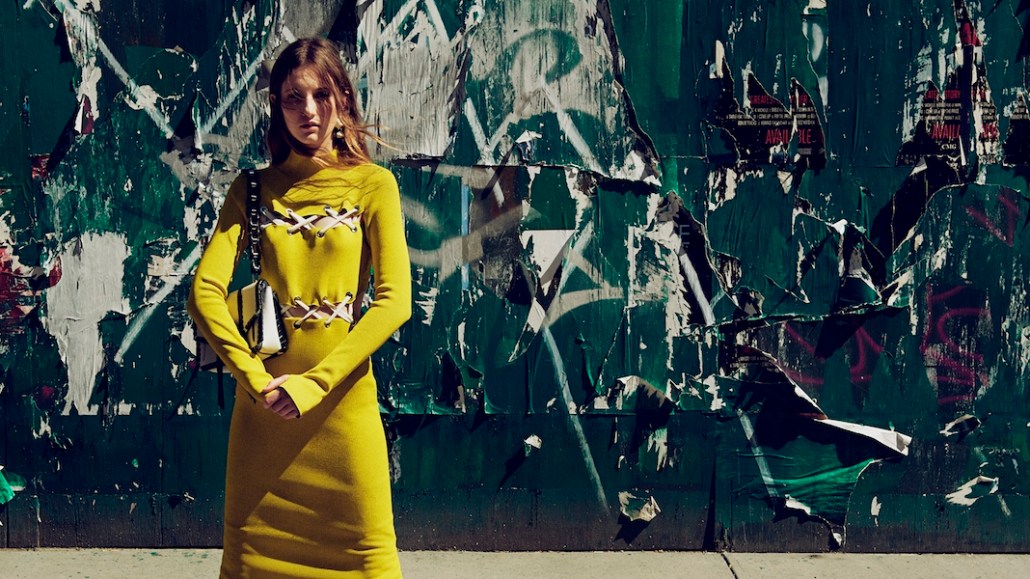 On Wednesday, Farfetch unveiled a new set of tools for retailers at its FarfetchOS event in London. Considered the final piece of its retail platform, the “Store of the Future” retail solution powered by Farfetch zooms in on digitizing the in-store experience for luxury brands.

The Store of the Future technology platform will support the company’s brand and boutique partners’ physical stores by giving them insight into customer data history from online and, as it’s collected, in-store shopping trips. Using the platform, stores will be equipped with a database that shares information around a customer’s past purchases, preferred brands and browsing behavior, which will help salespeople better personalize the in-store shopping experience. A “Connected Rail” feature uses in-store product recognition to keep track of what products a customer picks up, tries on and puts back in a store, in order to personalize future recommendations.

The platform will also help stores better manage inventory and order fulfillments, and drive foot traffic by offering buy online, pick up in store and in-store returns. The Store of the Future platform, currently in beta mode, will launch at the boutique Browns in London and at Thom Browne’s New York store.

“Farfetch has been experimenting with a wide range of technologies. For instance, through Store of the Future, brands will have a better understanding of what a customer journey could look like in a ‘connected store,” said Stephanie Phair, Farfetch’s chief strategy officer. “Customer recognition is important in this experience.”

Farfetch, founded by José Neves in 2008, began aggregating inventory from independent boutiques in order to help small retailers increase sales by going online. Farfetch, which takes a commission of sales made through its site and doesn’t house inventory, later expanded to bring on luxury brands to its platform. In 2015, it opened Farfetch Black & White, a technology solution component powering the function and logistics of brands’ e-commerce sites, while letting them maintain control over their merchandise and customer relationships.

Store of the Future will extend that relationship to powering digital in-store solutions. Farfetch is far from the first retailer to lay claim to the “store of the future” promise. It’s also not rare for a digitally minded retailer to set up a back-end database for its physical stores: Retailers like Cos Bar, Reformation and Timberland all use in-store technology like traffic counters and customer identification tools to enhance the in-store experience.

What Farfetch’s Store of the Future tech could do is boost a much bigger network of brands — particularly those that might not otherwise be investing in updating their stores — to become digitally led.

“With Black & White, Farfetch recognized that it built a digital skill set that it can apply not only to its primary business, but also to other brands that lack a native digital culture,” said Tamar Koifman, head of marketing at the Digital Luxury Group. “This is more of a stretch. But if Farfetch pulls it off, it will open a new revenue stream with no cannibalization of its core business.”

It also marks the first time a company of its kind is targeting the in-store experiences of its partner brands. Net-a-Porter also powers the e-commerce sites of some brand partners, including Roberto Cavalli and Emilio Pucci, but it hasn’t assisted store’s physical experiences.

Farfetch is starting to clip Net-a-Porter’s heels. To date, Farfetch has raised a total of $305 million, putting its valuation at $1.5 billion, following its Series F round of funding (which added $110 million) last year. According to Luca Solca, the head of luxury goods at BNP Exane Paribas, Farfetch has been growing 60 percent per year, and is on track to surpass Net-a-Porter as the largest online aggregator within two years.

Farfetch, which is rumored to be prepping for its IPO, brought in a projected $125 million in revenue in 2016. Yoox Net-a-Porter’s revenue totaled $1.9 billion. In February, Net-a-Porter founder Natalie Massenet, who exited her company when it merged with Italian off-season luxury retailer Yoox in 2015, joined Farfetch’s Board of Directors.

“The Farfetch model is certainly working,” said Solca in a recent report. “Meanwhile, in a changing market and against increasingly aggressive competitors, the Yoox Net-a-Porter group is ceding market share.”

Also announced during FarfetchOS: an on-demand delivery service, initially launching as an exclusive partnership with Gucci, which will fulfill orders for the brand at Gucci stores, in order to expedite shipping and offer same-day shipping in 10 cities. What’s more, it revealed an online customization capability, launched exclusively with footwear designer Nicholas Kirkwood, that lets customers choose materials, colors and details of a pair of loafers.

Last week, Net-a-Porter announced two new customer service offers that bring the luxury retailer closer to customers’ homes. A “you try, we wait” feature will deliver orders to eligible customers the same day it was placed — a Net-a-Porter stylist will wait to take the item back, in case it needs to be returned. The other feature is an on-call stylist that will bring a personalized selection of items to a customer’s home for consideration.

“It’s become an arms race to see who can make digital luxury the most appealing,” said Koifman.

Jeffrey Fowler, president of Farfetch North America, will be attending the Glossy Summit on May 15 to talk more about the Store of the Future. Learn more here.