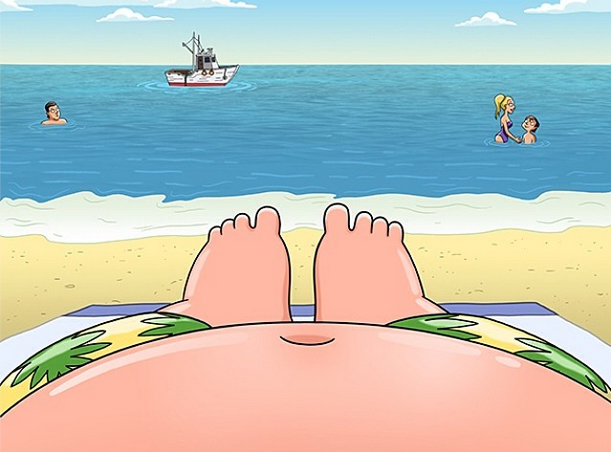 Mobile game makers typically resort to app install ads to drive downloads. But Fox has decided to use Instagram to market the forthcoming “Family Guy” mobile game, simply titled “Family Guy: The Quest for Stuff.” (The game is being produced by mobile gaming developer Tinyco.)

Peter Griffin, the protagonist of the long-running animated series and a fixture in the game, now has an Instagram account.

Griffin is a quick study when it comes to social media, apparently. He has already posted his own version of the classic “this is what my feet look like while I lie on the beach” Instagram photo and has generated a sizeable following since he first posted last Friday. As of this writing, Griffin had attracted more than 47,000 Instagram followers. Three of his five Instagram posts have received more than 4,000 likes, and all have been commented on at least 100 times.

The “photos” are being created in-house, with a member of the “Family Guy” marketing team creating the images and the show’s writers contributing the captions, “Family Guy” spokeswoman Tracey Raftery told Digiday. The account will be active throughout the rest of the year as a way to promote both the game and the show, and users may find hints about future episodes included in the photos, she added.

But unlike Facebook, which has app install ads that generate downloads with the the tap of a thumb, Instagram does not have a way to direct users outside its platform. Still, the instant popularity of Peter Griffin’s account suggests Instagram could be an effective way to raise awareness. Whether that will translate to game downloads remains to be seen, however. “Family Guy: The Quest for Stuff” launches on April 10.