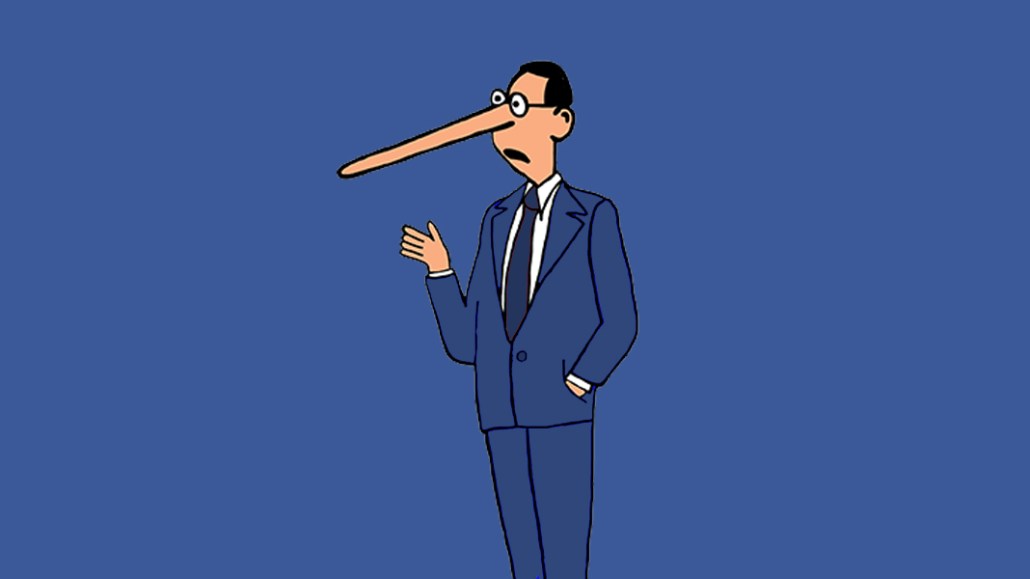 Facebook’s metrics woes may be far from over.

After fessing up to a string of measurement errors over the past six months, the social media company has bowed to pressure from ad buyers and started letting third-party auditors check its numbers.

Media agency execs, who spoke under condition of anonymity for fear of jeopardizing their relationships with Facebook, expressed concerns about the figures, with some saying they would need to revisit their budgets for branding campaigns. “We will definitely look at cost per viewable impression for branding campaigns and amend our planning appropriately,” said one media agency executive.

Some agency execs suspect the figure is even lower than 20 percent, and that verification companies like Moat and Integral Ad Science aren’t getting access to the platform fast enough to guarantee their numbers are correct. “This is a big issue. It’s money being taken off advertisers that they’re not getting their fair whack on,” said another media agency executive.

Others said the video findings reflected a lack of consistency in the numbers they have seen for ads in general. “Sometimes the figure Facebook reports is five times higher than the [Media Rating Council] standard, but sometimes it’s five times lower, with no clear pattern for under- or over-reporting. It’s a concern in general that there is no consistency,” said a third agency executive.

The industry standard for video viewability, as laid out by the MRC, says a minimum of 50 percent of a video ad’s pixels must be in view for two continuous seconds. Unilever and GroupM have stricter demands for their partners, requiring that 100 percent of the video player be in-view and that half of the ad is viewed with the sound on, with no autoplay.

Viewability has two components: whether an ad is seen by a human and whether the ad has the ability to be seen on a website or app. Facebook scores high (99 percent) for ads that are viewed by humans. The issue is the percentage of video played in view. One media agency exec said only 22 percent of its videos were played in view, troubling execs across the agency.

Questions about Facebook’s display ad viewability surfaced in December, when Drew Huening, director of Omnicom’s digital ad buying trading desk Accuen, said at a Nomura conference that the agency’s own tests showed Facebook display ads failed to reach the minimum industry standard that calls for 50 percent of an ad’s pixels to be visible in the browser window for one second. Huening said while Facebook has done a good job of building a system in which everything is viewed by human eyes, people scroll through the News Feed so fast, especially on mobile.

Now, evidence points to the same problem with video, raising questions for advertisers about whether they’re allocating the right amount of spend to platforms like Facebook. More than two-thirds of U.S. marketers now run video ads on Facebook, according to eMarketer.

Agency executives and observers varied in their responses to the viewability shortfalls. One exec said advertisers will need to combine as a collective force to successfully challenge Facebook on these metrics.

“There are numerous and often-confusing messages advertisers can be presented with on the merits of different types of media,” said Alex Tait, founder of Entropy Consulting and former Unilever director. “To make informed and fact-based planning decisions, third-party verification is essential. It stops media owners from marking their own homework but also allows a logical approach to audiovisual-neutral planning for video.”

Others expressed resignation. One agency exec said they haven’t dug into Facebook’s viewability rates because clients either haven’t requested it or don’t want to pay the additional cost for the auditing. “Even with third-party ad viewability, what can be done about it?” said a different agency exec. “The only option is to not invest in Facebook or social. But social plays such a huge role in digital strategy that it would be a massive step for brands to make that kind of decision.”

Still others said it’s naive to expect viewability to be high on a platform like Facebook and that viewability isn’t necessarily the best way to measure a campaign’s success.

“The numbers can be low but actually just reflect how Facebook works as a platform,” said an agency exec. “The best way to use it is to reach large audiences with something. If you’re obsessed with viewability, you can buy it in a way where you’re getting guaranteed views, which improves those numbers, though it ends up costing more and driving worse business results. If you just buy on the basis of maximizing impressions, you may well get 15 to 20 to 30 percent sort-of viewability. Looks awful on paper. Still works well in reality.”

Update: Facebook has since issued the following statement: “We believe that the value of an ad is not binary but is generated the moment an ad comes on screen. According to independent Fors Marsh Group research, people can recall mobile news feed content at a statistically significant rate after only 0.25 seconds of exposure. And a recent Nielsen study showed that 38 percent of brand recall, 23 percent of brand awareness, and 25 percent of purchase intent are driven by video impressions that are under two seconds. This is because people consume content differently on mobile devices and in News Feed. As people scroll quickly through their News Feed, they get exposed to ads, meaning duration can be short while still delivering value.” said Facebook spokesman Tom Channick.