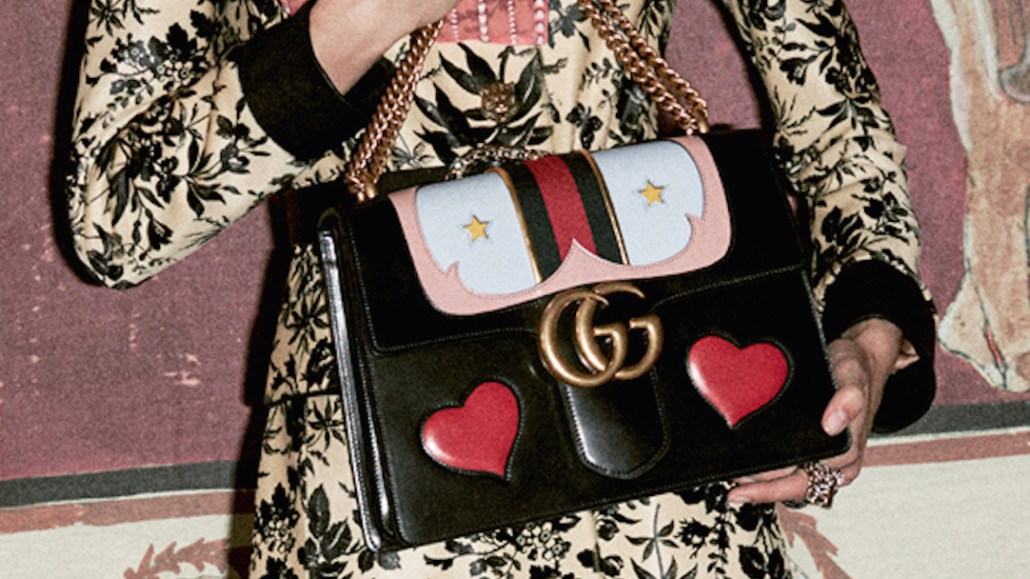 The latest It bag is a bigger draw for millennials in the luxury shopping space than clothing.

In the first half of 2017, full price sales of luxury handbags increased 22 percent, while scarf and hat sales rose as well, at 20 percent and 83 percent respectively, according to a report by retail analytics firm Edited that examined 30 major U.S. retailers that sell more than 5,000 brands. Meanwhile, full price apparel sales have decreased by 34.5 percent. Jeff Staple, founder of e-commerce site Staple Design, said the shift toward accessories among millennials is in large part a result of the continued rise of fast fashion.

“The Uniqlos and Zaras of the world have made fashion a commodity item, like Q-Tips and copy paper,” Staple said. “Everything from your neck down to your ankle can be generic. It doesn’t have to be name brand. Whether you bought the Céline piece from the runway or the Zara knockoff piece a few days later, it doesn’t matter because it’s not immediately noticeable.”

As these retailers continue to replicate luxury looks, millennial shoppers ultimately feel less compelled to shell out hundreds of dollars for a designer blouse when they can get a similar style on the cheap. Instead, they create their own high-low looks, mixing fast fashion pieces with select luxury products, which increasingly have become accessories.

“With its low prices and swiftly developing trends, fast fashion has facilitated this demographic’s endless switching up of garments,” Katie Smith, Edited senior retail analyst, wrote in the report. “But that’s not to say the millennial shopper isn’t attuned to the finer things in life, which is where luxury accessories play a key role. For millennials, these kinds of items represent better value as they’re a way to affiliate with a brand or lifestyle but can be worn across multiple looks and in different stylings.”

Among luxury brands, Gucci handbags were among the most purchased among millennials, experiencing a growth of a whopping 595 percent in the first half of 2017. Other popular brands included Louis Vuitton, Saint Laurent, Valentino and Dolce & Gabbana, according to the Edited report. Millennials are also spending more on these items — shelling out an average of $1,465 on a full-price handbag in comparison to $1,414 in 2016. At the same time, non-discounted sales increased by 22 percent.

Jian DeLeon, editorial director at HighSnobiety, said high-end accessories serve as a way for both millennial and Gen Z shoppers to enter the luxury market in a way that indicates status without throwing it in the faces of their peers.

“The reason why a lot of these brands have a certain prominence is they sell a lot of accessories,” he said in a previous interview with Glossy. “It’s like selling a piece of the kingdom to get something entry level. It provides relevance and eyes to the brand.”

Ultimately, Staple said Edited’s findings points to a larger cycle within retail. As luxury clothing has moved away from bold, ostentatious branding, the allure for high-end clothing has become lessened. Especially in the age of social media, Staple said, sharing an outfit of the day in a high-end dress you could ostensibly get for a fraction of the price at Forever 21 has less appeal.

“When brands like Rag and Bone and James Perse were at their height, there was a simplicity theme going on,” Staple said. “We were in a phase where it was cool to be nameless, brandless and generic. We’re going through this phase now where people want to be a bit more flossy and glossy. They want to show off a bit, but are still conscious of their budgets, so are thinking about where they want to spend.”