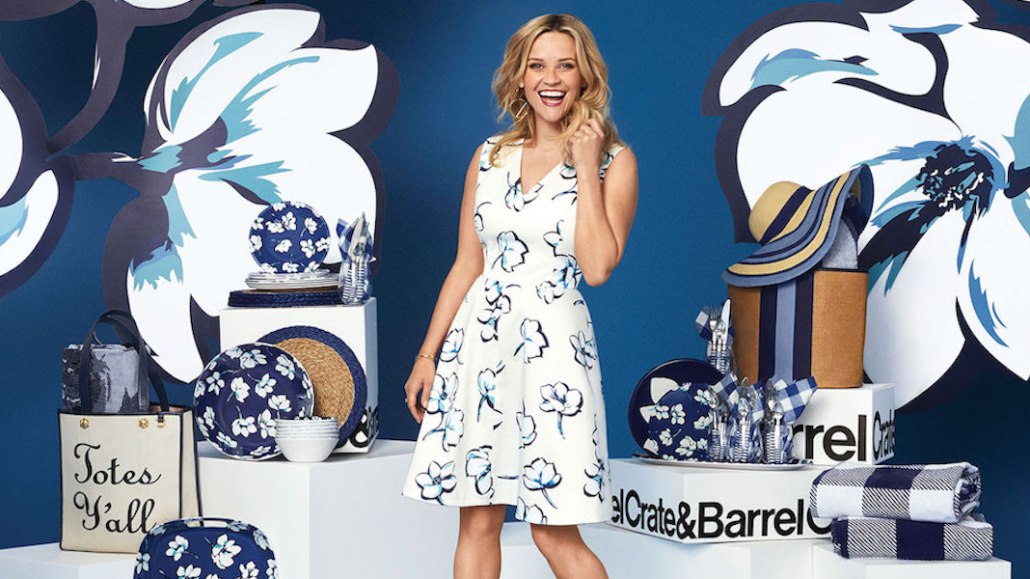 From a hotel rooftop in Manhattan last week, blue and white beach balls bobbed in a modest-sized swimming pool, as people milled about the perimeter grazing on chicken and waffles, and eggs and grits stacked atop floral kitchenware.

What looked like a poolside soirée doubled as the launch of a new home-goods collection in collaboration with Crate & Barrel and Draper James, the lifestyle brand founded by Reese Witherspoon in 2015 inspired by her Southern upbringing. The capsule is the company’s latest move to stake a larger claim on the increasingly saturated lifestyle market, coming on the heels of 2017 collaborations with Jack Rogers and Eloquii on an exclusive sandal line and plus-size apparel, respectively.

Though Draper James has identified itself as more than just an apparel company since its beginning — touting a variety of home-goods and stationery items, in addition to printed dresses and blouses — it also understands the art of attaching itself to high-profile retailers in order to profit.  In addition, the company has used this tactic to establish a more robust brick-and-mortar presence: Beyond expanding from one to three shops in the southern United States, it teamed with Nordstrom on a wholesale deal last year that sells Draper James products in 15 stores.

“Our partnership strategy is never about dropping a tag and a logo on another company’s product,” said Draper James CEO Taylor Rettig. “It’s always about intentional design and leveraging the expertise of the partners — from manufacturing to technical design distribution– to reach a larger audience and larger customer base, which we may not have the scale and resources to do on our own.”

Of course, Draper James isn’t the first brand to look to mass retailers to build out its lifestyle cachet. In many ways, it’s taking a cue from the playbook of its peers, such as Virgil Abloh’s buzzy partnership with IKEA and designers like Lilly Pulitzer and Marimekko designing lifestyle products for Target. In the case of Crate & Barrel, the Draper James team saw the partnership as a way to further an existing relationship between the company and Witherspoon, with a collection that would be mutually advantageous in offering up her star power.

“We’re very thoughtful and selective about our partners,” Rettig said. “We want to make sure we’re delivering a great product for the customer base, for both us and our partner, and also that we’re being as inclusive as possible when it comes to accessibility and broadening our assortment.”

Though Crate & Barrel has a history of working with designers like Fred Segal and British designer Matthew Williamson, adding Draper James to its roster serves as another way to help the company stay fresh. Suzy Cirulis, vp of marketing at Crate & Barrel, said in addition to having worked with Witherspoon previously, the design sensibilities and aesthetic of Draper James felt like a match.

“When we find the right fit, one that feels authentic and inspiring on both sides, we pursue it,” Cirulis wrote in a email. “And we will continue to do this, as we think it brings freshness to our customers and allows us to reach a new audience. Looking out for what’s ‘new and next’ for our customers is part of our DNA.”

Gesina Gudehus-Wittern, engagement manager at Vivaldi, said partnerships like Draper James and Crate & Barrel can ultimately prove effective when they leverage each other to find new means of reaching different audiences.

“In a great brand collaboration, the whole is more than, and different from, the sum of its parts – both brands create something together that neither would have been able to do on its own,” she said. “And in the right collaboration, they are able to create better customer experiences, offset each other’s weaknesses, open up new target audiences and enhance each others’ overall brand perception.”

Additionally, she said it’s important that companies like Draper James be mindful to avoid gimmicks in partnerships. Though capsule collections can be advantageous to both parties, they are most effective when companies already have roots in the lifestyle arena, she said.

“A collaboration only makes sense for brands with lifestyle-brand aspirations that have already taken the first steps to becoming one and have a strong and clearly defined target audience,” she said. “So they have a clearly defined lifestyle or culture, but they may not yet have consumer permission to launch their own line of another type of product. A collaboration partner is the best way to bridge that gap.”