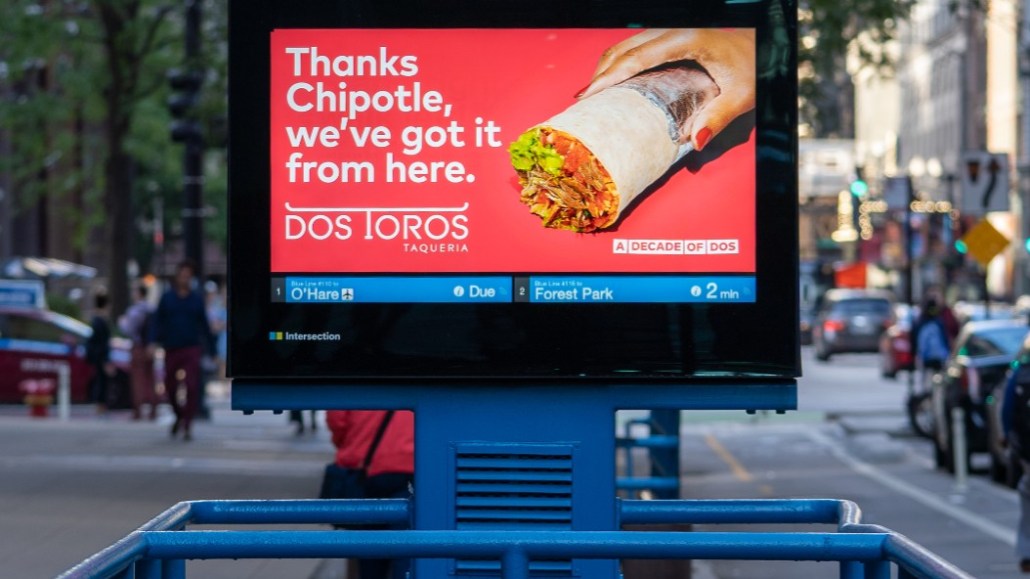 This past May, Dos Toros debuted a new delivery option allowing customers to place orders directly with the fast-casual Mexican chain. While it still works with third-party delivery services like Seamless and Grubhub, adding native delivery has helped Dos Toros better track and attribute its digital advertising to figure out what’s working and what’s not.

“It’s a digital product that we can actually link to,” said co-founder Leo Kremer. “Instead of posting an ad that says, ‘Come visit Dos Toros’ on Instagram, which is really hard to measure, you can put an ad up that says, ‘Hungry? Order delivery through our platform.’ We can measure that, get a sense of what’s working and iterate on our messaging and channels we’re using.”

Doing so hasn’t changed how the company allocates its digital budget yet, but it has resulted in tweaks to some of its food photography or copy after figuring out which posts were driving delivery sales. With photography, finding a sweet spot between photography that looks professional and user-generated has been key, especially since the chain’s main focus for digital advertising is on Instagram. The chain handles marketing with an in-house four-person team, but it also works with digital consulting agency Lamington Co.

In addition to having a digital product to link to in advertising, delivery likely also gives Dos Toros more data on the consumers who order delivery through them than third-party delivery services. In general, as companies grapple with more third-party data restrictions having the ability to gain first-party data on consumers has become more valuable.

Historically, Dos Toros has made digital the focus of its small marketing budget — which is usually between 1% and 2% of its total sales — with 70% going to digital and the majority of that 70% going to Instagram. The rest has been a combination of billboards, partnerships and guerrilla-style marketing tactics, like last summer’s burrito drops. This month, the chain has put billboards front and center with 60% of its dollars going to the medium. The rest of the budget is split with 10% each going to partnerships, content creation, marketing, content creation and influencers.

Ahead of its Oct. 30 anniversary, the nearly 10-year-old fast-casual Mexican chain has significantly increased its use of out-of-home with the lion’s share of its budget, or 60%, going to billboards in New York City and Chicago. Some of those billboards speak directly to the chain’s more well-known competition, Chipotle, with mildly antagonistic copy that reads, “Thanks Chipotle, we’ve got it from here.”

“We’re always spending time and money on digital. That’s our steady drumbeat of marketing across digital and social platforms, but we felt with this campaign we’d have more of an impact with out-of-home,” said Kremer. “Also, I think out-of-home is a little undervalued right now. The bang for the buck was there.”

While the chain has used billboards before, this is the biggest effort the company has ever done. Previous efforts were very local, using just a few placements nearby a new restaurant location to get the word out to passersby. This time, the chain has put placements all over New York City and Chicago, the two cities where the chain currently has locations.

“Digital is the base of the marketing pyramid for most brands these days,” said Christophe Jammet, director of social media and mobile at innovation consultancy DDG. “Digital is great for brand building and awareness, but it’s important for brands to not ignore the importance of [showing up in] real life. New Yorkers are walking around going to work and making decisions about what to eat, and this is a reminder of a brand that is physically adjacent to you. It’s a really relevant means of advertising.”