Despite every indicator pointing to Amazon’s dominance of e-commerce, only 11 percent of retail executives surveyed at the August 2018 Digiday Retail Forum said that Amazon is their fast-growing e-commerce channel. Meanwhile, 72 percent of respondents indicated that their owned channels are growing fastest.

Amazon could still account for a larger portion of their overall sales and revenues, of course. 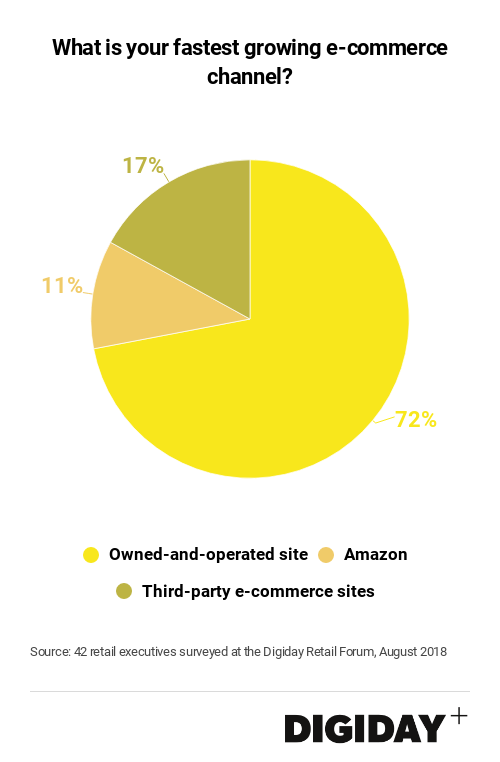 Retailers are well aware of the importance of improving sales through their own e-commerce sites. Directing consumers to owned e-commerce channels improves retailer access to consumer data and shopping behaviors that would otherwise be limited by third-party sellers. By selling directly to consumers online, retailers can more accurately track shoppers through the sales funnel and use that information to improve their online experiences and marketing efforts.

Major retailers including Party City and Best Buy have stepped into selling on Amazon. Selling on Amazon’s obvious upside is that it greatly expands retailers’ reach among U.S. consumers, but it also comes with the risk of shaping consumer habits to shop at Amazon first. That’s why Party City is capping the number of different products it sells on Amazon, which in turn limits Party City’s potential growth on Amazon compared to it’s owned online store.

Other retailers could see their owned channels growing faster than Amazon because they use the platform as a dumping ground for poorly selling inventory. If retailers are selling limited inventory, and their worst of it, on Amazon, then it would be unlikely for retailers to have greater growth on the e-commerce giant than their own platform.

Retailers have long viewed Amazon as a frenemy, forced to weigh the upside of new sales against the e-commerce platform’s many downsides. But the strong sales growth of retailers owned online stores relative to Amazon or other third-parties is a good sign for ensuring they’re not platform-dependent in the future.