This is the second part of a research series on a set of emerging technologies in media and marketing. Click here to read our report on virtual reality.

“Up until very recently, I would have said that AR is even further behind than VR because it requires so much innovation at the level of imaging and recognition so things can be overlaid [on the physical world] realistically,” said Michael Lebowitz, CEO of Big Spaceship.

But suddenly, from Apple’s WWDC announcement of their ARKit for iOS developers to Google Lens’ computer vision applications, the stage is set for a boom in augmented reality. “That changes the game,” said Lebowitz.

Digiday Research surveyed 172 executives from media and marketing companies to uncover their approaches to AR — and the development of the market. Key findings:

“We’re not having to license the tools or engines, or create them from scratch anymore,” said Derek Fridman, global executive experience director at Huge. “Now, we’re pretty much on every single iOS device out there in the world, and when we move out of development, we’re already pre-installed on a ton of devices.” 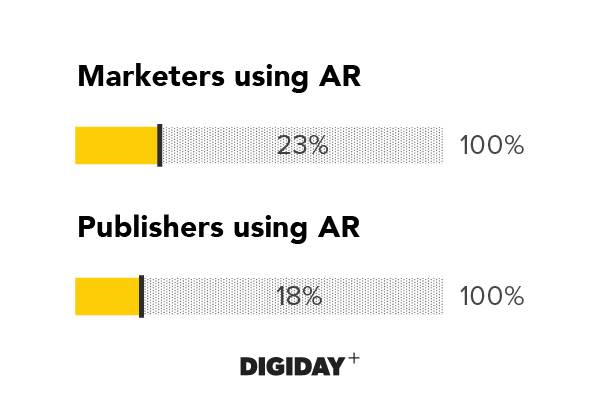 Despite this forthcoming deluge, 23 percent of marketers and only 18 percent of publishers have used AR. Publishers’ lukewarm attitude toward the technology comes from a lack of utility.

“Can AR actually tell the story better than some other technology or solve a user need?” asked Marc Lavallee, executive director of The New York Times’ Story[X] innovation division. “All too often, there’s this pursuit of the next technology without that consideration.” After all, what can AR solve that an interactive graph or image can’t?

Those on both sides of the media and marketing divide are employing AR for entertainment (39 percent) and as an information resource (36 percent) in almost equal parts. As the technology matures and makes its way into more everyday devices (e.g., smart lenses), information will likely win out. 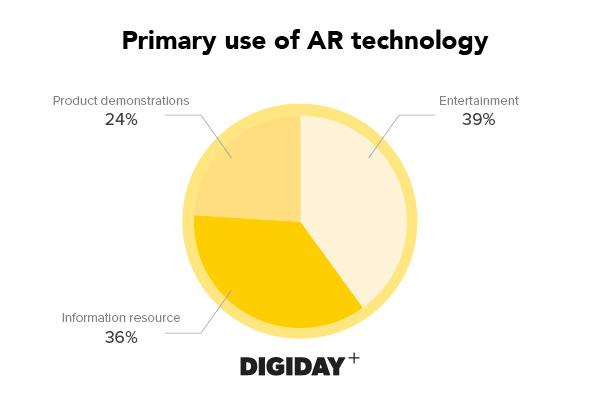 But product demo applications do have an opening here. “We’ve built a couple of experiences for [Microsoft’s] HoloLens for car manufacturers,” said Adam Simon, director of strategy at IPG Media Lab. Modules like these allow customers to explore different vehicle color options, see how the advertised automotive technology works on the inside and more. This has a huge effect on reception.

“There’s been a lot of research done around the fact that when someone goes through training, for example, and they do it in an AR-based experience, their retention of the things they learned is significantly higher because they actually get to interact in an environment that feels real to them,” said Fridman. 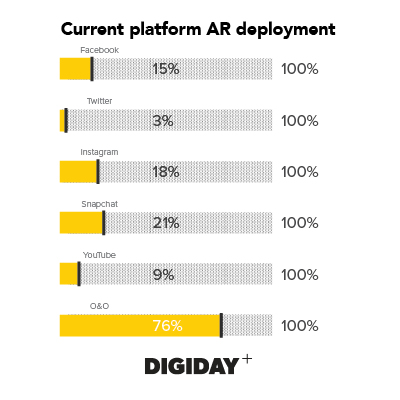 Of course, the platform question is still up in the air. As with other emerging technologies, owned and operated platforms still command most of the distribution, with 76 percent of publishers and marketers using them to push their AR content. This strategy was seen in the most popular AR execution to date: Pokemon Go. But that was just the mainstream beginning.

“The ground was softened by Pokemon Go, but that wasn’t true AR,” said Lebowitz, as the overlaid image lacked true interaction with what was seen through the phone’s camera lens. Releases like Apple’s ARKit is a great next step and will no doubt increase the open-source potential of O&O environments, but there are already other platforms with built-in advantages. 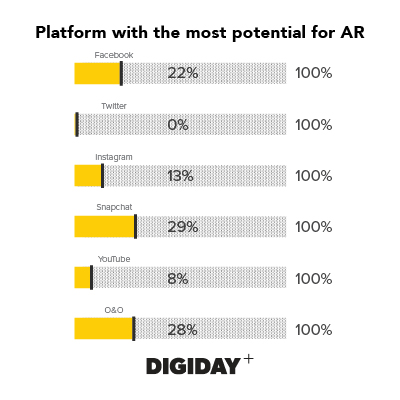 Snapchat, with its interactive “lenses” and other augmented, camera-based enhancements, is viewed as having the most AR potential by 29 percent of media and marketing professionals. Facebook has similarly announced camera lens enhancements that set it up for future competition. But a question remains: Why?

“AR is very playful, obviously because there’s the Pokemon Go scenario of just, like, ‘What if the world was a different kind of playground?” said Brian Dell, director of Quartz Creative. But he points to a deeper, more utilitarian information-based function the technology can provide.

“What kind of layers do we wrap on the world that says to the audience, ‘If you experience it through this lens, you will get this value out of it?’”