This creative wants to replace Citi Bikes with skateboards

When Citi Bike first launched in New York last year, it had more skeptics than supporters. But as Citi bikers recently crossed the 19 million-mile mark, one agency creative is pitching a four-wheeled spin-off.

Citi Board was first floated three weeks ago on Instagram by Adam Padilla, a self-professed Citi Bike fan and the founder and chief creative officer at creative agency Brandfire. The Instagram campaign for his pet project re-imagines Citi Bike with skateboards instead of bikes.

“Since I have a love for building brands, I developed it as a brand as if it were sanctioned by Citi,” Padilla said. “I got the idea from my skateboarder friends and we imagined what it would be like if Citi Bike had a board component,” adding that it was modeled after spoof ads found on Adbusters and was a commentary on branding.

So he snapped up some pictures of Citi Bike racks at Herald Square, did some photo-shopping and put it on Instagram and Facebook with a straight face, just to gauge people’s reactions. 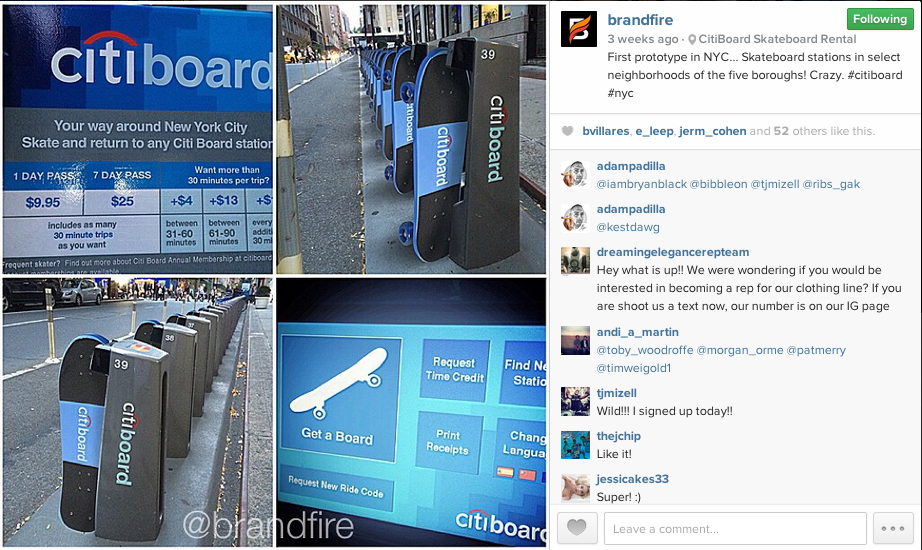 “We really wanted to show the power of branding and the power of social media to reach different audiences,” Padilla said. “We even had people who believed it and were outraged at the commercialization of skateboarding, again proving that social media — especially that which has relevant, engaging or inflammatory content — carries itself.”

Padilla went as far as to launch a website, and set up an inquiry form for those who actually fell for the prank, perhaps because, with only 55 likes, the initial Instagram post didn’t exactly go viral. But if nothing else, he did catch the attention of Langdon Graves, a communications design professor at Parsons, the New School of Design, who invited Padilla and his team to deliver a guest lecture on fake brands to her freshman class.

“It was never about actually bringing this to life. In real life, it would be such a disaster — people would be breaking their legs all over,” Padilla said. “We wanted to stir something up. The whole point of engaging content is that it creates conversation.”