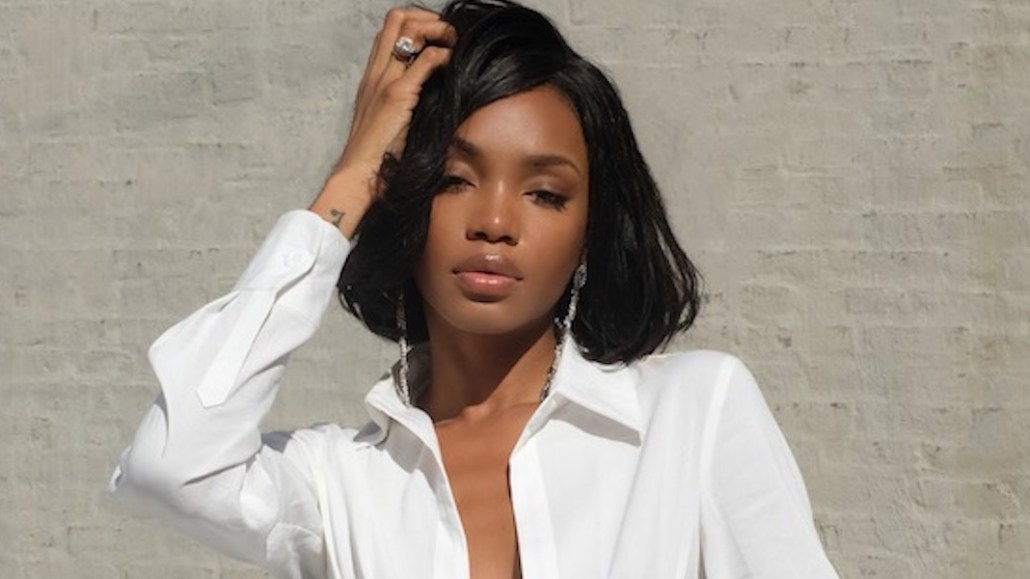 Perhaps fashion’s “see now, buy now” experiment has legs after all — but most designers still won’t benefit. As Zara, H&M and Forever21 face a number of challenges and Amazon offers its own affordable apparel, an even faster competitor joins the ranks.

Choosy is a New York- and China-based startup that designs and manufactures apparel “inspired by” what is trending on Instagram. Launching Tuesday, the company is vertically integrated, meaning that its design team and manufacturers are all in-house, and — crucially — it only produces items that customers have pre-ordered and can manufacture in batches as small as a few hundred. It also plans for a blisteringly fast turnaround time of as little as two weeks. The online-only company won’t hold inventory or have to pay rent on physical stores.

In this way, said co-founder and CEO Jessie Zeng, Choosy hopes to avoid the unsold garments that plague fast fashion brands. In March, H&M reported about $4.3 billion in unsold clothes, and it reportedly burns some of the products it can’t sell at a power plant.

“Traditional fast fashion is essentially blanketing — they look at everything that happens on the runway and release everything,” said Zeng, a former investment banker whose family business is in textile manufacturing in China. “To test out a style, they have to blanket all the stores to see if it sells. All clothes are essentially a potshot.”

In the vein of existing fast-fashion brands, Choosy will offer clothes based on designer trends. However, Choosy is looking to social media — rather than the runway — for inspiration. In-house designers will select what to create based on data pulled from Instagram, using algorithms that comb trending celebrity posts with comments like “Where can I buy this?” and posts that customers have commented on with “#GetChoosy.”

The initial collection, available Tuesday at noon eastern time, includes an iridescent jacket and pants set inspired by one of Beyonce’s On the Run II tour costumes for $89, a $59 white dress that is similar to a Spring 2018 Jacquemus look worn by Kim Kardashian, and a red $69 lace dress by Christopher Kane (that he sells for $1,025) and a black $59 minidress by Versace, both worn by Rihanna.

Choosy is banking on a limited “drop” model, which has proven successful for buzzy brands like Supreme and KKW Beauty, by creating a sense of urgency and scarcity.

Every Tuesday and Friday at noon eastern, Choosy will release a small collection (starting with five pieces, but eventually more), which customers will be able to buy for a three-day period. Then, Choosy will manufacture according to how many orders were placed and deliver clothing to customers within as little as a few days.

During a test run based on a pair of Jonathan Simkhai pearl jeans like those worn by Gigi Hadid at Paris Fashion Week, the company reported selling out within a matter of hours. It already has more than 22,000 followers on Instagram.

In perhaps one of the only elements that is not streamlined, Choosy is offering sizes 0 through 20, which means that the company must design, create and photograph two versions of every look created.

“When we first started the company, about half of our first employees were not fitting a typical straight size, so it just made sense to go to a size 20 for now,” Zeng said. She admitted the process of building an expanded size range into the model was “painful,” because of the complexities added to the design and manufacturing process. “We were so naïve — we thought we could completely change the whole world, but we realized this is why other brands don’t do it.” Still, she said she’s happy to do this now, rather than making the change if the company was a $100 million business.

And in another nod to the generation that has created an art of “unboxing,” Zeng said the company spent two months working on the packaging, which is both “super Instagrammable” and reusable. (Shipping is free, for now.)

The model has attracted a first round of investment from firms including New Enterprise Associates and Forerunner Ventures.

Eurie Kim, a general partner at Forerunner, which has invested in Jet.com, Dollar Shave Club and Glossier, said she was intrigued by Choosy’s combination of real-time social inspiration, high-quality rapid manufacturing, accessible prices and the potential to minimize waste. “Fast fashion has historically taken inspiration from runway shows or leading brands; however, the industry has been suffering from billions of dollars of unsold inventory, which reflects a mismatch with what consumers want,” Kim said. “Today’s customers have preferences that are evolving at a real-time pace, and Choosy’s approach of producing only what they know consumers want is what will enable them to be more efficient as they scale.”

Choosy still faces some of the struggles associated with traditional fast-fashion models.

The ethics of effectively copying other designers’ work can get a bit murky, especially when the brand doesn’t shy away from intentionally mimicking designer looks and when Diet Prada has gained notoriety for calling out fashion’s copycats. But for many designer brands, this is just a factor of doing business.

“It’s a real issue in our industry,” said Cornell University’s Tasha Lewis, an associate professor of fashion design management. “For designers, it’s a challenge to see the price point diluted, but at the same time, it drives our industry. Copying puts us in a more innovative space.” Lewis said that, although designers are trying to push for legislation to protect against copying, by the time a suit has been filed, often the industry will have moved on. Thus, she said, often companies, such as in the case of Forever 21, will settle out of court.

She said that being “inspired by” designer looks, as Choosy is marketed, is the best way to approach it. “I think we can find a balance where you can get the look for less by tweaking it with different stitching and details. Otherwise, line-for-line copying leaves a bad taste in peoples’ mouths.”

Others, such as The Fashion Law’s Julie Zerbo, have more critical concerns.

In a May post, she wrote that Choosy might be “a lawsuit waiting to happen,” due to right of publicity laws that prevent unauthorized commercial use of someone’s name or image. Choosy’s Instagram, for example, includes images of Kim Kardashian, Kylie Jenner and Rihanna. Zerbo pointed out that, hypothetically, someone appearing on the brand’s Instagram could claim that Choosy is using their image to sell products, or that a designer brand whose logo appears could say that Choosy is not authorized to use the brand’s intellectual property.

And the model doesn’t address the waste created by disposability in the fashion cycle. According to a 2016 report from McKinsey, the number of garments produced annually doubled between 2000 and 2014, accounting for 100 billion in 2014, and the number of garments purchased each year by the average consumer increased by 60 percent.

Lewis, of Cornell, said that an even shorter production cycle calls for new textiles and energy sources, in addition to increased waste going to landfills and charity.

“Even though the customer wants it, how long will they hold on to it until you make the next thing? I think we are overstocked in our closets,” she said. Still, Lewis thinks the Choosy approach is an interesting model, especially because the company won’t have to markdown excess product to drive demand, and that using artificial intelligence is a great method for trend forecasting.

Finally, Choosy’s tight turnaround time also presents a conundrum for print advertising: If the lifecycle of designs is about two weeks, how can the brand create ads with a three-month lead time?

“We have talked extensively about this,” Zeng said. But the brand has already mapped out a solution, thanks, again, to Instagram: timed drops of pre-planned influencer collaborations.

But with all this dependence on Instagram, doesn’t that make Choosy vulnerable to changes? Zeng definitely has her seatbelt on, she said, but the model is dependent on tracing hashtags, rather than an API, and the design team is very up-to-date with celebrity and paparazzi blogs. Thus, even though Meghan Markle deleted her Instagram, she is still a major style inspiration, Zeng said.