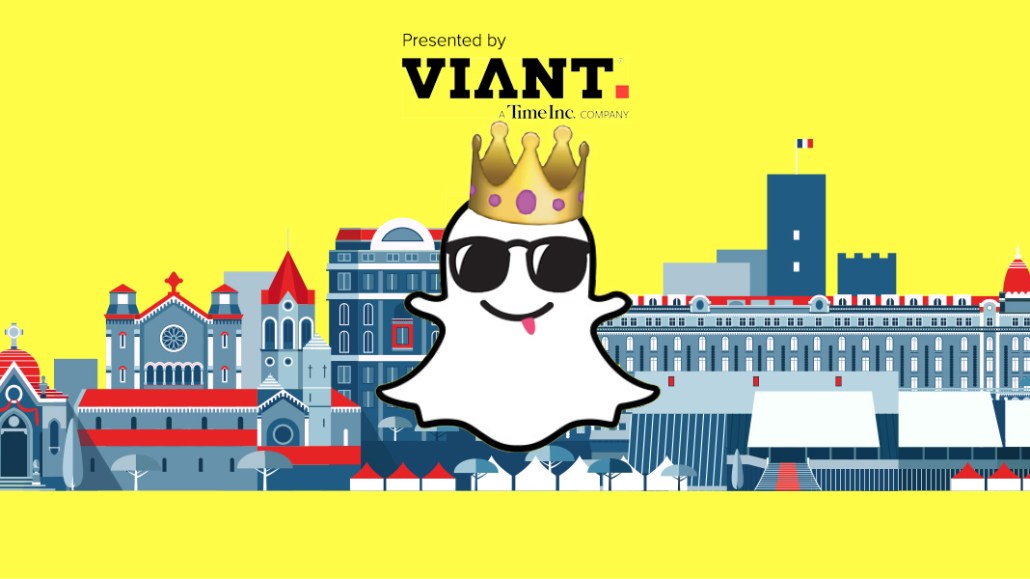 Snap’s “after-dark” party on Monday night was at a private greenhouse around the corner from its large, yellow Ferris wheel. It had beautiful flower decorations and homemade ice cream — and no outsiders, especially if you’re a journalist.

Several attendees described a strict attendance policy, which made it nearly impossible for anyone not on Snap’s list to get into the party — even some Snap execs had issues. For some publishers, weary of platform power games, the velvet-rope routine was over the top for what attendees described as a fairly pedestrian party.

“It’s a power play,” said an exec at a Snapchat Discover publisher. “These are all powerful media people, and Snap controls who gets in and what they do.”

Snap party protocol: I took a photo w/an old colleague & within seconds security rushed in to distort it w/a flashlight and middle finger.

Another attendee said at one point he took his phone out to take a picture — but then remembered the sign that said no photography was allowed. Snap, mind you, is “a camera company.”

“I had flashbacks to when I was being yelled at by seven security guys in the Beijing airport for taking a video with my phone, so I put the phone back in my pocket,” said the attendee.

Several attendees also described a quiet, subdued affair until things picked up closer to midnight, with multiple representatives from Snap’s publishing and shows partners, including NBCUniversal, Turner, Vox and Refinery29. Digiday’s editor, along with a group of publishing executives, was turned away after it was determined he was a reporter. “Sorry, no reporters are allowed,” said a very nice rep, refusing to explain the rationale.

One important group of attendees that did not seem to have as huge a presence: marketers. A majority of the attendees seemed to be Snap’s media partners, according to sources. There were some brand marketers — one attendee said Estée Lauder was in the house — but mostly it seemed to be a big “media night party” at the biggest advertising festival of the year. Throwing a party in Cannes without marketers is the Riviera equivalent to a sausage fest. Better luck next year.

Refresh
Dinner suggestion: Head to Chez Vincent et Nicolas, at the foot of the winding street into the old town. Sit outside with a bottle of rosé and get the spareribs. Seriously.

The Digiday Cannes Translator: Part 2
Cannes has its own language. Here’s more of what people really mean.

“Great to see you again.”
Translation: I have absolutely no recollection of you.

“Do you have a card?”
Translation: Let’s end this conversation.

“Text me later.”
Translation: Go away.

“How has your Cannes been?”
Translation: I don’t like you.

“I’ll see you at the Gutter Bar.”
Translation: You’re drunk.

“I’ve been in nonstop meetings.”
Translation: I’ve been drinking heavily all day.

Digiday Cannes Podcast: Disney’s Andrew Sugerman
Disney evp Andrew Sugerman, who runs the entertainment giant’s digital media unit, joined the Digiday Podcast Cannes Edition to discuss how even Disney needs to be choosy about which platforms to focus on. A couple highlights:

“You don’t have to be on every platform. Even Disney, this giant media and entertainment company, you have finite resources and focus and content-development capabilities. We want to focus on the places that have the biggest impact.“

On Snapchat: “We have shorter engagement periods. We have slightly different content that’s going to work on that platform. It’s been trial and error.”

The ubiquitous CMO
One of many peculiarities of Cannes: Chief marketing officers are treated like they’re stars — and in hot demand. Unilever CMO Keith Weed isn’t scared of pontificating on the future of marketing. He’s getting a lot of time to do so this week. Weed spoke yesterday at The Girls’ Lounge on a marketer’s roundtable, as well as at a HuffPost rooftop event, and today he is aboard The Wall Street Journal’s yacht to hold forth on brand safety. Later, he will tell everyone at the Palais three things keeping him up at night. Not to be outdone, P&G marketing chief Marc Pritchard is a nearly ubiquitous presence. He had an off-the-record chat at the Vox Media dinner — it wasn’t very juicy anyway — and has lined up gigs at The Economist’s CMO series, The Girls’ Lounge and the Palais. His basic message: Digital advertising is a mess, and he wants it to get better, although he doesn’t say if he’s willing to pay more.

Overheard at The Majestic
“Fifteen euros for two waters? What the fuck!?”

Facepalm award winner
Someone didn’t get the memo about female empowerment as a major theme at Cannes.

A quieter Cannes
Maybe cracking down on the freeloaders scared people off. Cannes appears to be much quieter than in years past. Even the Gutter Bar, a Cannes institution and monument to poor decision-making, was fairly tame last night when it is normally heaving with people.