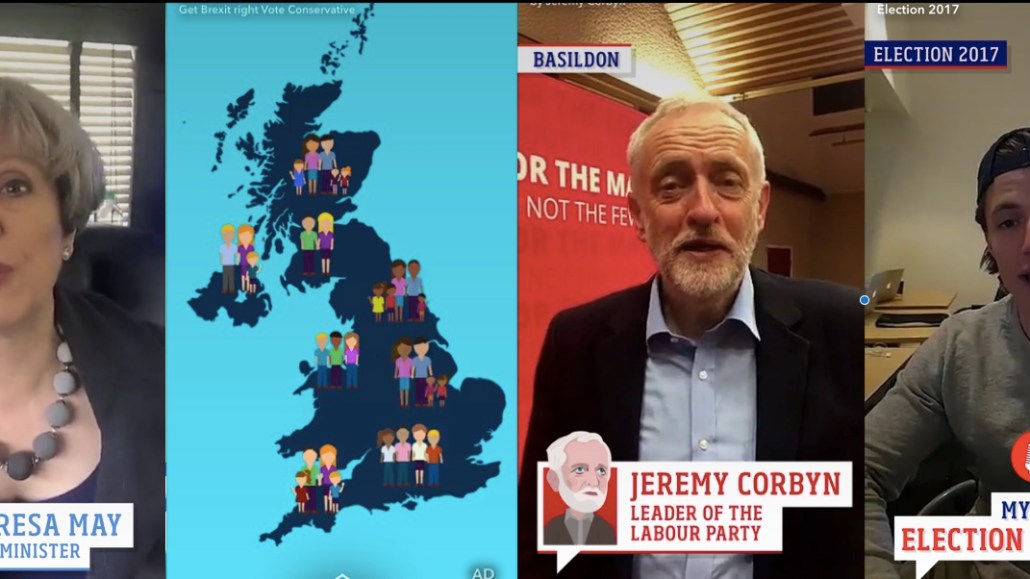 Snapchat has created an Our Story in its Discover section for British political party leaders to answer questions from the app’s 10 million daily users in the U.K. ahead of the June 8 general election.

So far, questions including “How will you make the U.K. competitive for exports in the wake of Brexit?” have been posed to May, while Corbyn has fielded questions on what makes him the right choice to lead Britain through Brexit.

Each party leader has also released a snap of their manifesto summaries in the Discover channel, which is called “General Election: Our Story.” The Tories’ snap pledges to increase school budgets by £3 billion ($4 billion) by 2022 and NHS spending by £8 billion ($10.3 billion) per year by 2023. Labour’s snap focuses on not limiting immigration, and both the Liberal Democrats and Green Party snaps pledge to give voters a second referendum on the Brexit deal.

Users can ask questions via video or messages, and questions will be selected for answering by Snapchat’s London-based Our Stories team, which is similar to how Snapchat worked with France’s presidential candidates before the May election there. The questions are then relayed to the candidates, who give video responses. The candidates are interspersing their Q&As with footage of them canvassing.

Like its U.S. counterpart, Snapchat’s Discover feature in the U.K. is heavy on entertainment news, but the social platform has made a concerted push into political coverage in the U.K. lately. It’s published Brexit-related Stories, partnered with the Electoral Commission a few weeks ago to launch a geofilter to push voter registration. There will be an Our Story featuring snaps submitted by Snapchatters around the U.K. And as it did in France last month, Snapchat will have other election-related features go live before and on election day itself.