How Brazilian retailer Magazine Luiza is holding its own against Amazon 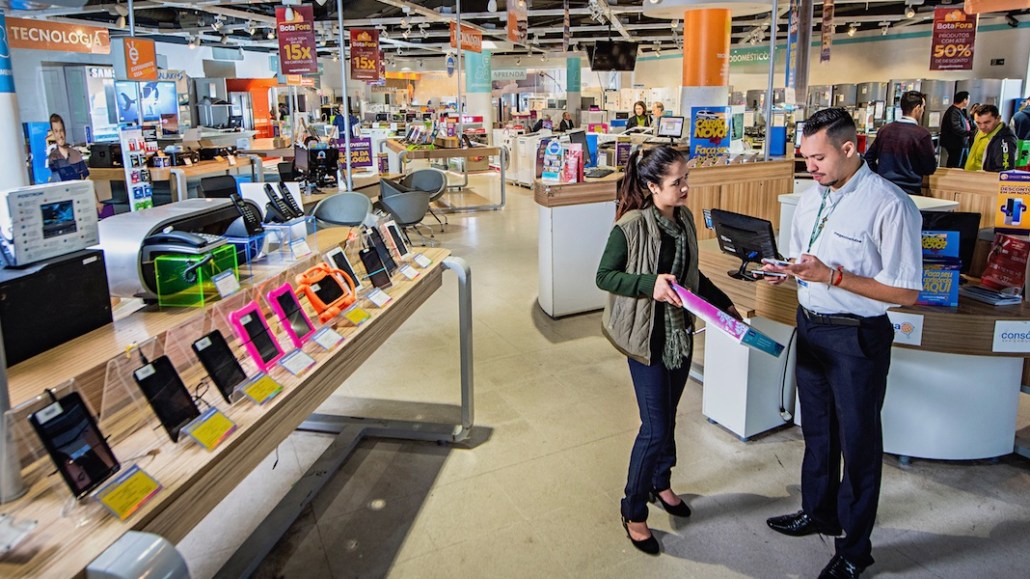 For Brazilian home furnishings and electronics retailer Magazine Luiza, physical stores are very much part of its future, even as it competes with online-only marketplaces.

“Human warmth is a very important component of Brazilian e-commerce,” said CEO Frederico Trajano. “I always thought physical stores were going to be there, and I didn’t want to decide for the customers [how they shop] — the customer decides when, where and how they want to make purchases.”

Magazine Luiza, known locally as Magalu, has been around more than 60 years and has 885 physical stores. Instead of shuttering physical locations, the company is actually building new stores; it opened 71 in the past year. Magalu is using physical stores to anchor a flourishing e-commerce business by using them as distribution centers for online purchases. It’s also rolled out 148 “virtual stores” with no inventory where customers can view digital catalogs, talk to staff members, sample products and purchase online.

“People want sales assistance; they want to talk to somebody, even in this highly digital world,” Trajano said.

Despite competition in the e-commerce market from rivals Via Varejo and B2W, and Amazon’s moves to expand to the Brazilian market, Magazine Luiza has grown its sales on account of its omnichannel strategy. The company is looking to grow its e-commerce capabilities, with future plans to accelerate delivery, launch shipping from store locations and roll out a fully fledged fulfillment service. Its third-party marketplace currently has 1,500 sellers, and it contributed $37 million in sales, 10 percent of total digital sales for the company. The company reported $1.1 billion in sales in the second quarter of this year, a jump of 43 percent compared to the same period last year. A third its sales were from e-commerce, which grew 66 percent year over year.

“It’s interesting that they’re taking a page out of the book of what Amazon has done [elsewhere],” said David Bray, CEO of ad agency Briz Media Group, which works with tech companies that service retailers. “It’s always a concern when you have competitors with deeper pockets, but their advantage is the infrastructure they have to protect themselves with a really deep understanding of the customer in Brazil. Magalu is thinking like a tech company, and it’s what all retailers need to do today.”

Magazine Luiza began selling products online in 2000, six years after it began inventory-less stores. Customers can shop for items through its website or app and pick them up in stores or have them delivered to their homes. Two years ago, the company rolled its online marketplace for third-party sellers, and three years prior, it let customers set up affiliate stores on Facebook. While the model may resemble Amazon plus a network of stores, Trajano said scaling an e-commerce business that included delivery was a formidable challenge, since finding reliable delivery partners wasn’t easy.

Brazilian e-commerce retailers need to navigate logistics complications like shipping delays, taxes, custom clearances and payment-method limitations. To get over these hurdles, Magalu uses its physical locations as distribution centers for inventory, letting customers pick up goods on site. It has centralized its inventory-management systems, and developed relationships with a network of local delivery companies.

“The most important part of our competitive advantage is that 1,600 small companies make deliveries for us in 700 cities; they work exclusively for us, they do stock replenishment and deliver it,” Trajano said.

Beyond its logistics network, the company’s chief advantage over Amazon is its strong brand affinity among Brazilian consumers, said Euromonitor International research analyst Marília Borges. The company’s e-commerce site draws 30 million unique visitors per month, according to Magalu. To strengthen the brand among consumers, in 2011, the company rolled out the “Magazine and You” initiative, which lets customers set up their own stores on Facebook featuring their own curated product lists. The retailer takes care of order processing, payment and delivery, while the seller picks up a small commission, a way to grow customer acquisition, Trajano said.

Trajano has also made associates a major part of the company’s digital transformation, letting them take control of Facebook pages of individual stores and buy ads, empowering them as local brand ambassadors.

The Brazilian e-commerce market was valued at $22.5 billion last year, according to eMarketer. Amazon entered the Brazilian market in 2012 with its Kindle store; it has since expanded its online marketplace to include books, consumer electronics, home and kitchen products, office supplies, fashion and sports goods. The company is reportedly looking to lease a 538,000-square-foot warehouse location outside Sao Paulo. Amazon’s ability to expand to new markets can’t be ruled out, but there will likely be challenges.

“Brazil is a very protectionist country, so it will be difficult for anyone to break into the market because of incumbents and because of politics,” said Sucharita Kodali, principal analyst at Forrester Research. “Not to mention, it’s not that large compared to other markets in the world, so I’m not sure what resources any foreign player will put into trying to dominate there.”