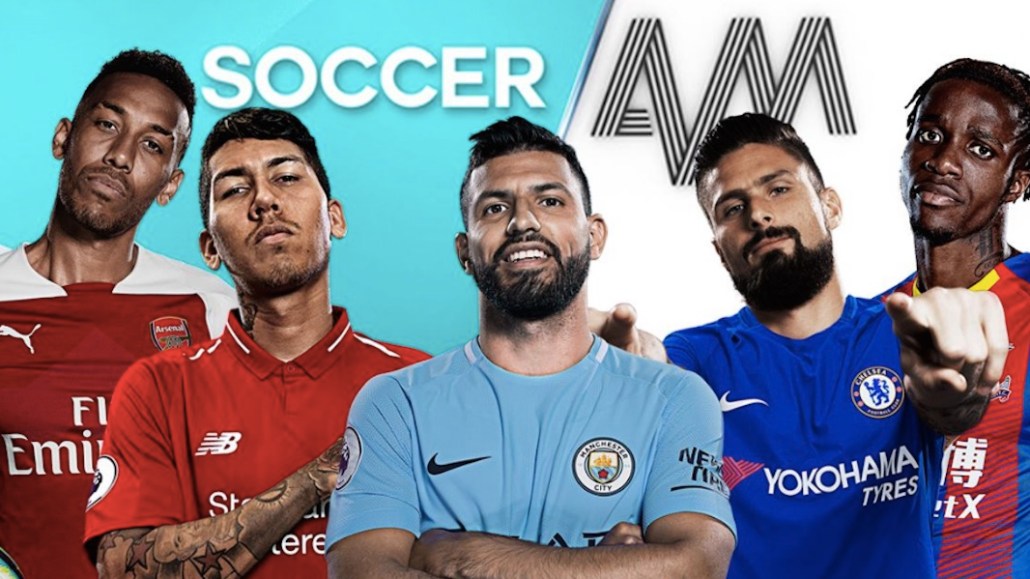 In the ongoing battle to reach more non-linear football viewers, Sky Media has launched a weekly, live-chat show, “The Football Social,” airing on YouTube and Facebook during the U.K.’s Premier League season. The 33-week-long series, which started Aug. 10, is being sponsored by sister company Sky Bet and will feature live commentary from presenters from YouTube channels Football Daily and Sky Media’s Soccer AM, alongside betting tips and offers.

“We don’t have everyone watching on terrestrial, so this is about how we get people coming back to our platforms for the conversation,” said Jason Hughes, head of creative solutions and branded content at Sky Media.

“The strategy from Sky is to own the ecosystem,” said Richard Barker, evp of M&C Saatchi Sport and Entertainment. “Football fans are not a monolithic base; that’s the challenge for brands. This shows what Diagonal View can do: create nimble, well-produced, low-cost shows accustomed for the audience, maybe not with the same reach as [Sky’s long-running weekend TV show] ‘Soccer Saturday.'”

The first episode gained 200,000 views across the two YouTube channels, (Football Daily has 1.5 million YouTube subscribers and Soccer AM has 750,000 YouTube subscribers), with no specific promotion aside from cross-promoting on other channels, what Hughes calls “a good start” to growing its YouTube audience. “Views are part of the currency, but there are lots of different types of views,” he said.

During the World Cup, Sky ran a similar eight-part series for Sky Bet that reached 2.5 million views across Facebook, Twitter, Instagram and Sky’s video-on-demand platform. Based on this, it’s confident it can pull in similar reach for “The Football Social.”

Over the last nine months, Sky Media and Diagonal View have run 12 campaigns with brands like Beats, Visa, Carling and men’s-health charity Movember, as well as their own separate commercial content deals. Hughes said Sky Bets is paying in the seven-figures to sponsor “The Football Social,” Sky Media’s biggest branded content social deal so far.

“There are still PR companies that do a good job in making noise through content on social, but we’re trying to find growth in brands coming with real budgets who are willing to invest and grow with us in partnerships,” he said.

For the first time, Sky Media is partnering with a third-party research firm to gauge how “The Football Social” impacts brand consideration. Typically, this type of post-campaign analysis is offered by media companies across all their channels, rather than specifically on social media.

“The biggest weakness for all social and branded content is that we need to get under the hood and understand what works. The whole market needs to get smarter at qualitative metrics and understanding what social content can deliver on,” he said.

Hughes estimates between 15 and 20 people work on “The Football Social,” not full time, across presenters, project managers and researchers. Although a branded weekly live show is not a scalable way of growing branded content revenue, Hughes estimates running one or two a year, but being the main sponsor adds some value for brands.

The easy integration of Sky Bet into the format makes this a strong case, points out Barker, but for consumer goods brands, this would be less intuitive. But partnership growth beyond brands typically associated with sports has been part of Sky and Diagonal Views plans. This year, the multichannel network launched female and male lifestyle-focused channels Bloom and Balls Up.

“We have someone on board leading the strategy to grow the non-football and lifestyle content,” said Hughes, “so we’re mindful of it and we see a market for it.”

Platforms like Facebook are putting big money behind lifestyle football content, and they have unrivaled knowledge on their audiences, said Barker, and while Facebook and Amazon will compete at driving direct sales conversions for brand sponsors, ultimately, brands partnering with Sky will do it for branding. “It still comes down to trust and relevance,” said Barker. “The guys at Sky have developed credibility in the live commentary and punditry space.”