How Salon and Politico get smart with Facebook’s algorithm 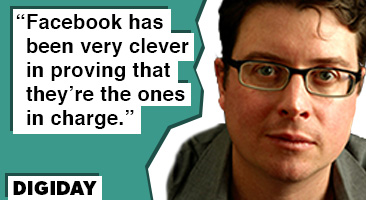 Facebook announced yet another change to their news feed algorithm on Monday, and some publishers are finding themselves in a better position than others to curry favor from the major (and sometimes fickle) distribution gateway.

Reducing the click-bait clutter is just the latest in a series of alterations aimed at filtering the news feed for quality. “For a while, people were thinking that there would be tricks to game the algorithm,” said Liam O’Donoghue, communications director at Salon, “smoke and mirrors techniques to get massive overnight. Facebook has been very clever in proving that they’re the ones in charge, that they’re going to sort out what people see in a way that’s most valuable to the users.”

Show me the numbers
In general, publishers seem to have little to worry about. Despite initial panic about changes in what users see on their news feeds, the amount of Facebook referrals has grown significantly for most in the past year. According to data provided by Parse.ly on its network of publishers, the overall proportion of Facebook referral traffic has increased from 12.19 percent in 2013 to 21.45 percent in 2014. When compared to Twitter’s slight decline in proportion (4.81 percent to 4.70 percent), it’s clear that the alterations have not signaled the apocalypse many in the industry were expecting.

“Over the years, it’s always been a cycle,” said O’Donoghue. “There are weeks or months where your Facebook traffic is up or down a lot. But since last year, despite the minor ups and downs, our traffic has increased significantly, 200 percent alone.”

It’s clear that, in some ways, Facebook has stepped into the role of critic, laying out criteria that, as O’Donoghue put it, “reward publishers who are publishing what the people behind the algorithm consider more meaningful news.” But there is a discernible logic to their judgments, and publishers who match it can see huge returns in traffic.

Optimize for engagement and interaction
Since Facebook made its first announcement on changes to its algorithm in March, the platform has been on a mission to limit the reach of spam content. “What it comes down to is increasing the amount of interaction,” said Andrea Bitely, director of social media at POLITICO.

User interaction can come in a number of forms, from likes and shares to comments, but they all indicate higher levels of engagement with a story. “I pull a weekly report on the Facebook numbers, and it does seem like the stories with the most likes and shares do get the highest reach,” agreed O’Donoghue, “so it seems like there’s a pretty strong correlation between engagement and reach.”

So how can publishers take advantage of the algorithm’s engagement bias? Bitely points to the use of quality visuals to encourage users to pass a piece of content along: “You’re seeing high quality images, full-scale infographics, and people are optimizing visuals now, especially on the iPhone or Android where you have very little space.”

And of course, there’s the quality of the content itself. “We’ll have really long political science articles or thousands of words about people’s intimate stories on the weekends that aren’t particularly sexy,” said O’Donoghue. “They’re not the stories that come out of the gate right away; it might take a couple of days or weeks to go viral.” Still, by engaging in substantive issues and topics, readers are only further encouraged to comment and discuss, thus driving up engagement.

Stopping click-bait won’t be the nail in short-form’s coffin
Some have argued that Facebook’s most recent anti-click-bait crusade will give preference to long-form publishers like POLITICO and Salon while stymying those shorter-form publishers focused on mobile and delivering content efficiently to on-the-go users, like Quartz.

Bitely maintains that this fear is unfounded. The click-bait precaution of measuring the time users are away from Facebook is just one in a larger set of criteria: “They’re still going to consider how many people are sharing the post, how many people are clicking on it. They’re just adding this new consideration of, ‘Is this just exclamation points and question marks, or is this a quality post?’”

“If you look at the Quartz page, they still get heavy interaction with their users,” she continued. “They’re doing well. They also have a verified page, which means Facebook has tagged them as having as having quality content. It’s going to be publishers that don’t have that verification that are going to potentially suffer.”

Note: The data set above was drawn from a select group of publishers in Parse.ly’s network in July 2013 and July 2014.

https://digiday.com/?p=85896
Most Read
Trending in
Explore More from Digiday Media