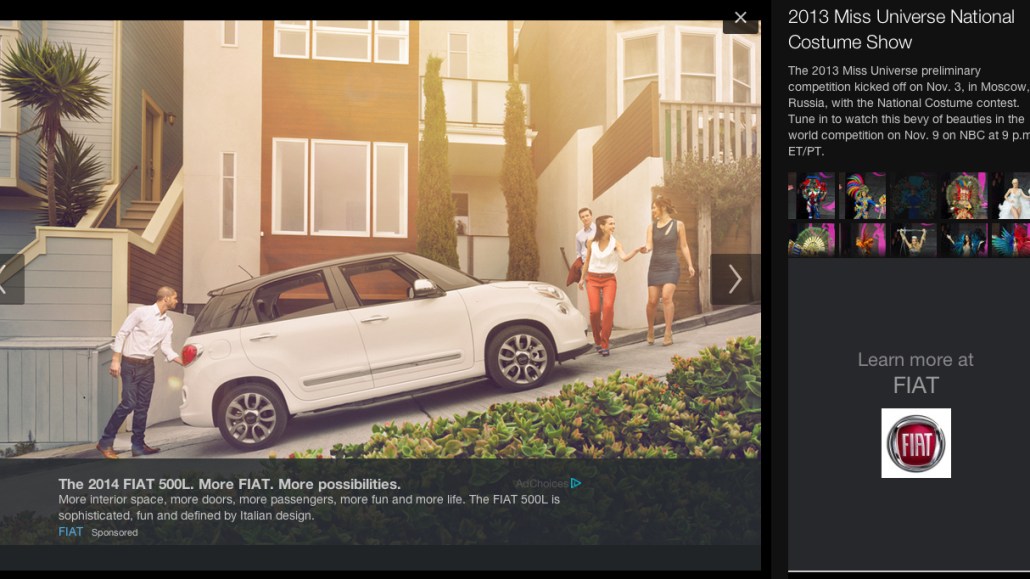 Yahoo continued its long tradition of copycatting its competitors’ advertising strategies by announcing Wednesday the launch of Yahoo Image Ads, “native” photo ads that will appear within Yahoo slideshows. Although late to native image ads, Yahoo is making it harder for its users to skip those ads.

Fiat, Relativity Media and Sony are among the first few brands to use the new ads at launch. (A Digiday reporter was served a Match.com ad while perusing a “Top Shots of the Week” slideshow on Yahoo’s celebrity gossip site omg!) Sold on a cost-per-click basis, these ads will also be served in slideshows published by Yahoo Sports, Yahoo Music and Yahoo TV. All of the ads will be sold directly by Yahoo — not networks or exchanges, currently — and can be targeted based on users’ gender, location and search habits.

The ads are large photos that, when clicked on, direct users to the advertiser’s website. 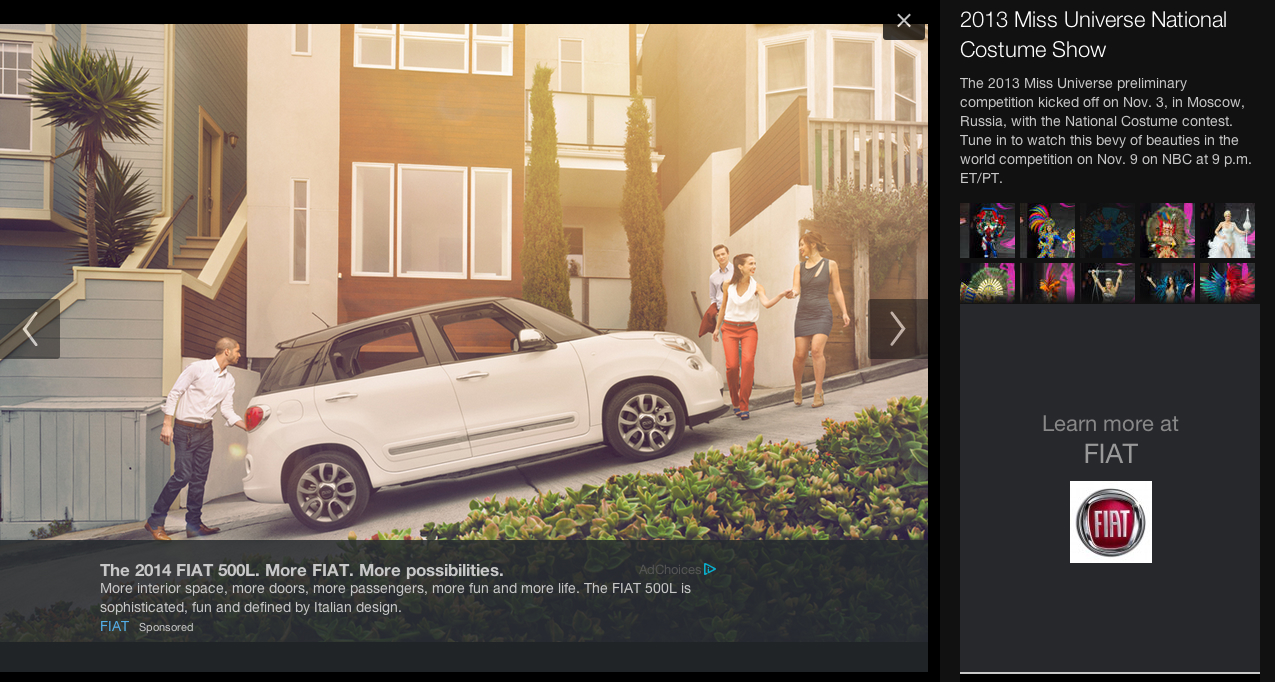 The idea behind this, by Yahoo’s telling, is to create magazine-like ads that are seamlessly integrated with the content. Yahoo brags these new image ads will be in “high definition.”

The hitch, of course, is this is something the Internet has long chased. Look no further than rival AOL’s loud championing of “Project Devil,” which it billed as not so much another huge ad format but a “rethinking of the webpage.” These type of ads typically falter based on implementation. Even with Yahoo’s huge reach, custom ads aren’t always welcomed with open arms by a digital ad-buying system that’s already woefully inefficient.

Yahoo is late to “native” image ads, though, an area already dominated by Facebook and Twitter. Twitter’s recent shift to a more photo-centric design has enabled brands to serve what amount to banner ads that take up more real estate in a user’s Twitter stream than a text-only tweet. Facebook’s timeline has long been filled with photos, and Facebook-owned Instagram recently started serving ads within its photostream.

What differentiates Yahoo Image Ads, however, is that they will be placed within photostreams that users must click through individually. This makes it hard to zoom by the ad. Facebook, Twitter and just about every other photo-sharing platform — including Yahoo’s Flickr service — lets users simply scroll up and down.

These services are typically “infinite streams” in which users can quickly scroll past an ad they don’t want to see. Yahoo’s slideshows require horizontal scrolling, which is more intermittent; therefore, it’s more difficult for users to quickly skip past ads, and so ads in those streams might be more effective. (Yahoo’s photo ads will not appear in Flickr streams.)

Twitter’s redesign has meant more “engagement” (retweets, replies and favorites) for tweets with photos, but there’s no sign that the click-through rate for these tweets is increasing. And while Instagram’s first photo ad received more than 230,000 likes, many users also responded to the introduction of ads with vitriol.

The goal in all of these cases, at least in theory, is to make the ads as relevant to the other editorial in the photo stream as possible. Which raises the question: What does the 2014 FIAT 500L have to do with Ms. Venezuela winning the Miss Universe pageant?