Bumpy traffic: How big viral publishers stack up against each other

Turns out not all viral publishers are created equal. And life at one of these sites whose stories are optimized for sharing and discovery via social networks can be quite tumultuous indeed. Heavily leaning on social platforms for traffic can produce meteoric traffic gains, but that dependence can lead to volatile swings in traffic from month to month.

Over the past 12 months, six of the most notable viral publisher sites — BuzzFeed, Distractify, Elite Daily, Thought Catalog, Upworthy and Viral Nova — saw unprecedented gains in audience, according to comScore. ( Though, comScore did not start tracking Distractify and Viral Nova until January 2014). 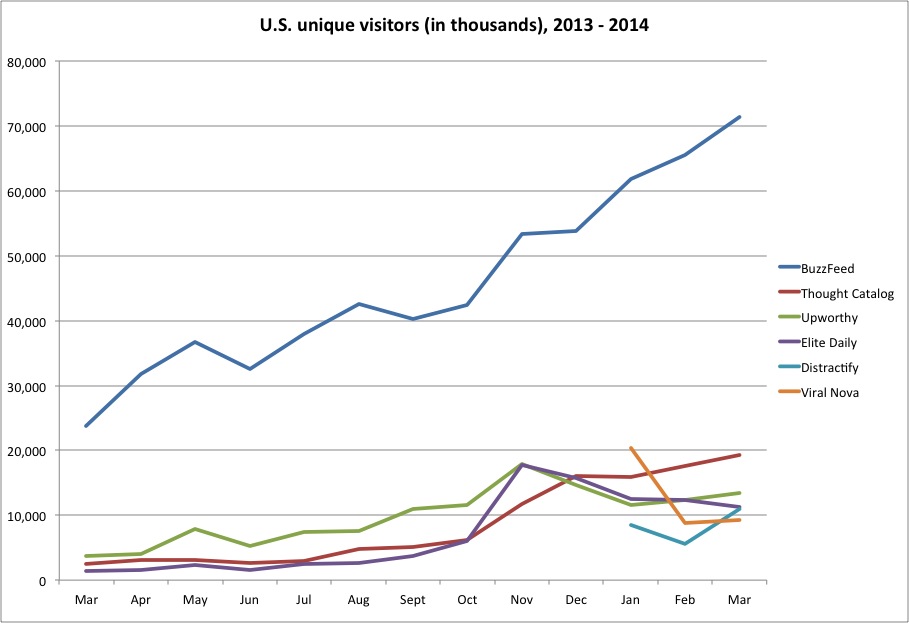 The charts suggest that relying on social media referral traffic can be a wildly effective way to build quickly build an audience. But some of those sites saw their traffic fluctuate wildly over the past half-year, showing that the flip-side to successfully using social networks to build an audience is that traffic patters can be quite unreliable. 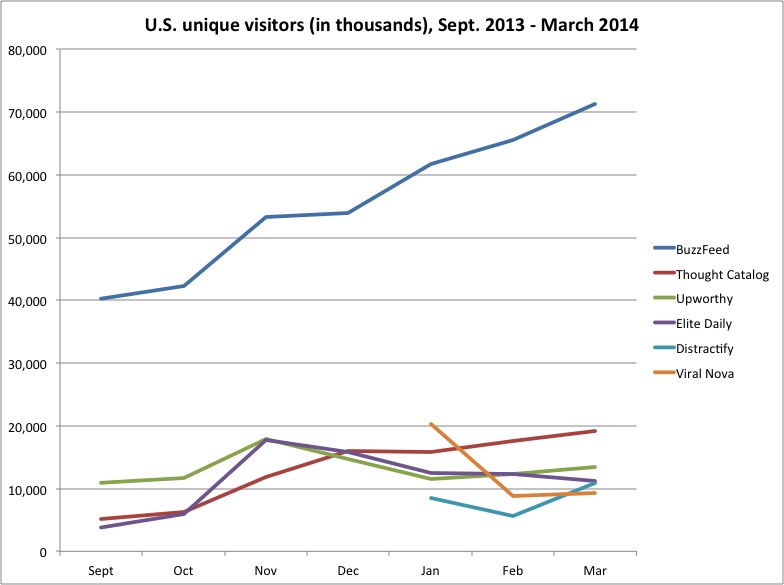 Upworthy saw its number of U.S. uniques from 11.6 million in October 2013 to 17.9 million in November 2013, a 54 percent increase. Then traffic decreased to 14.6 million uniques in December and 11.5 million in January before experiencing a slight rebound in February (12.3 million) and March (13.4 million).

An Upworthy spokeswoman said the publisher isn’t too concerned with these variances, which are to be expected given the nature of viral publishing. The site gets a majority of its traffic from social referrals, and most of that traffic comes from Facebook. Upworthy’s ratio of social to direct traffic has not significantly changed recently, suggesting it hasn’t been affected much by Facebook’s recent news feed changes. The November spike was due to four Upworthy posts that did “unusually well.” And Upworthy prefers to measure its success in terms of “attention minutes” anyway, according to its company blog.

Aptly name Viral Nova saw a similar drop and rebound. After debuting on comScore’s metrics in January with a staggering 20.3 million uniques, its traffic was more than halved in February, declining to 8.7 million. That number climbed to 9.2 million in March.

Distractify, meanwhile, saw its number of uniques drop from 8.5 million in January to nearly 5.6 in February. But Distractify’s traffic nearly doubled from February to March when it hit 10.9 million uniques.

Distractify CEO Quinn Hu said the traffic drop was due to a coding glitch that caused its stories not to appear in Facebook’s news feed from Jan. 23 to April 7, a serious problem considering more than 80 percent of the site’s total traffic comes from Facebook. Now things “are back to normal” in terms of Facebook referrals, he said.

Not every viral publisher seems as susceptible to those ebbs and flows, though. BuzzFeed continued its ascendance, growing each month over the past six months, according to comScore. Only twice in the past 12 months did BuzzFeed post monthly unique numbers lower than the previous month.

BuzzFeed vp of growth and data Dao Nguyen credits the growth to users’ transitioning more of their time from the desktop to mobile Web.

“As more people are using social and as social networks move more to mobile we have seen both more social traffic and more mobile traffic and that the two are converging rapidly,” she said.

Thought Catalog showed similar growth. It had large traffic jumps from October to November to December (from 6.2 million to 11.8 million to 16 million uniques), dipped slightly to 15.9 million in January, and has grown steadily since.

The only viral publishers to not rebound in recent months was Elite Daily. After nearly tripling its number of uniques from 6 million in October to 17.7 million in November, traffic has fallen each subsequent month. (Elite Daily did not return a request to comment at time of press.) Still, Elite Daily had 11.2 monthly uniques in March. It may be tough to maintain a massive audience as a viral publisher, but what remains is still large.