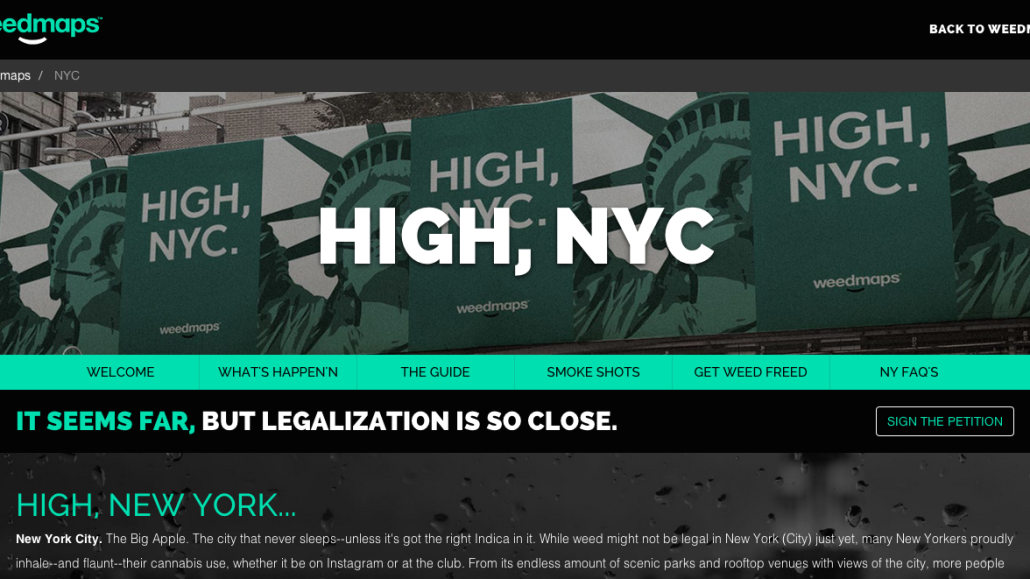 Broadway has housed the “Reefer Madness” musical in the past, but it’s apparently not yet ready for reefer ad-ness.

CBS has refused to let Weedmaps, the Yelp for recreational marijuana, to advertise its service on a Times Square billboard that bears CBS’s name, according to Weedmaps CEO Justin Hartfield. The ad, a billboard video that was slated to run on April 1, was pulled for attorney review just prior to running. On Tuesday, Weedmaps found out that CBS had been completely rejected the ad. CBS declined to comment.

Hartfield said he was surprised the ad was rejected considering the contract for the $50,000 ad buy was finalized on Feb. 20 and the creative — the 10-second clip embedded below — had been submitted for pre-approval in March.

But those negotiations were solely between Weedmaps and Neutron Media, the agency that handles ad sales for the digital billboard. Because CBS owns the naming rights to the billboard, it has the final say over what does (and doesn’t) get served on the screen. Ads for companies trying to capitalize off of states legalizing recreational marijuana, not currently legal in New York State, are a no-go.

Weedmaps has had no direct contact with CBS, Hartfield said.

The ad — taglined “High NYC” — was part of a larger campaign to promote marijuana legalization in New York state and highlight New York City’s current black market. Weedmaps even got into the content game for the campaign, publishing a handy listicle on the best places to be stoned in New York City.

“We wanted to associate ourselves with legalization because that’s one of the core values of our company,” Hartfield said. It’s also central to Weedmaps’s business model.

Weedmaps is active in all states where marijuana use is legal and has run advertisements in local and trade publications in those areas. The Times Square billboard would have been its first mainstream ad.

Although the ad will not be seen on CBS’s Times Square billboard anytime soon, it may soon appear elsewhere, Hartfield said.

“Luckily, CBS isn’t the only game in town. I’ve been approached by several other New York-based digital display and advertising agencies more than willing to take my money,” he said. “So there’s still hope for marijuana entrepreneurs in New York.”

Neutron has given Weedmaps a full refund for the rejected ad.

“As far as I was concerned, the ad was pretty innocuous,” Ray Shapiro, vp of screen marketing at Neutron, said. “But God bless America, the land of free speech.”