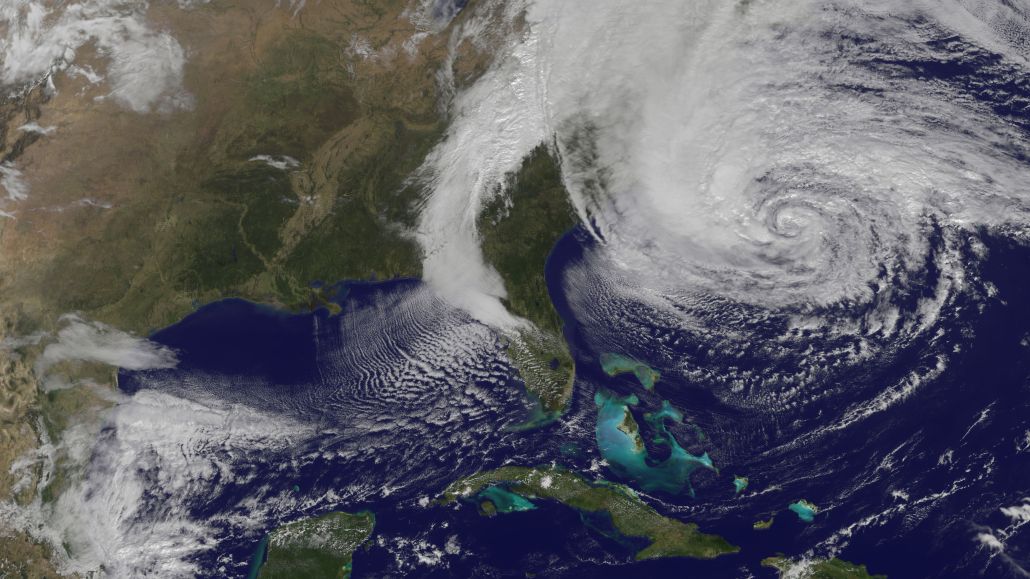 UPDATE: As of 12:01 am on Jan. 14, The Weather Channel is no longer available on DirecTV. The Weather Company and DirecTV were not able to reach an agreement about carriage fees. In an official statement from The Weather Channel, CEO David Kenny stated that he is “shocked [DirecTV] have put corporate profits ahead of keeping a trusted channel that subscribers rely on every day.”

Corporate disputes don’t just happen behind closed doors anymore — they happen online and all over social. Look no further than the Weather Channel’s recent thundering over its carriage fee disputes with DirecTV.

“People have always talked about the weather — we have a very engaged audience and maintain interactive social channels, so it was natural that if there was news affecting our audiences that we would talk about it on social,” said David Kenny, CEO of The Weather Company.

Perhaps, but these fee disputes aren’t exactly new. Cable companies and satellite TV providers are regularly engaged in games of chicken with programmers. Cable companies claim they are on the side of the consumer and want to keep prices down, and networks have no shortage of justifications for raising their pricing. CBS got into a disagreement with Time Warner last September that lasted a month until the two companies could reach a new agreement, cutting it very close to the 2013 NFL season.

The Weather Channel isn’t taking this dispute lying down. The network wants to whip up “grassroots” public outrage over what, at its base, is two multibillion companies embroiled in a corporate dispute over millions of dollars. That means hashtags! 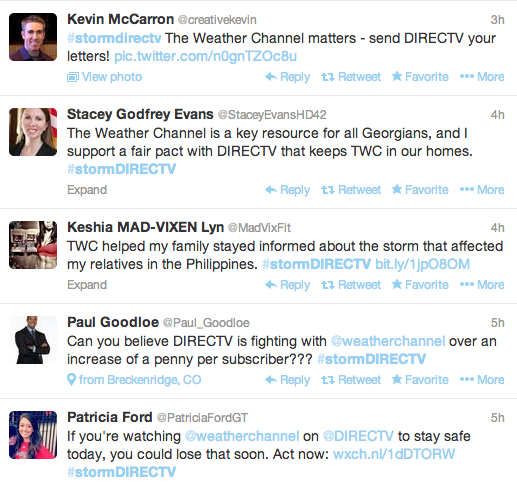 According to The Weather Channel,  the #stormDirecTV hashtag has gotten 3,057 mentions and the Keep The Weather Channel site has gotten 1 million unique visits so far. Its promoted tweets about standing up against DirecTV have gotten 70,398 clicks and 54,222 clicks on its paid Facebook posts. The whole social campaign has also motivated people to rain 43,289 emails down on Congress and make 203,843 calls.

That’s unlikely to move DirecTV much. Barring a last-minute settlement, The Weather Channel will be inaccessible to its subscribers.

“We remain in discussions with The Weather Channel on how to provide its service to our customers at the best value since people now use so many other ways to retrieve weather-related information,” the company said in a statement. “We launched WeatherNation (channel)  as an alternative to provide 24/7 hard news weather coverage in response to numerous customer complaints that more than 40 percent of The Weather Channel’s programming is dedicated to reality television shows. DirecTV also offers city-by-city weather coverage on more than 1,400 local broadcast stations and on DirecTV’s emergency channels in times of severe weather.”

While The Weather Channel’s seems to be generating a good amount of social buzz and actual action, the weather provider also has its fair share of critics, who are calling the company out for blowing a lot of hot air — effectively using public safety as a guise for a dispute that is really all about money 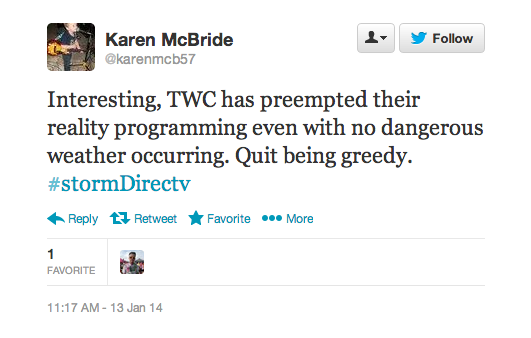 As Kenny sees it, while The Weather Channel may very well go off the air tonight at midnight for DirecTV viewers, the conversation on social media will continue to be a source for people to raise awareness and fight to get it back on the air.

“On pricing they [DirecTV] are being vague about value — but that’s whats good about social it keeps things transparent,” said Kenny.