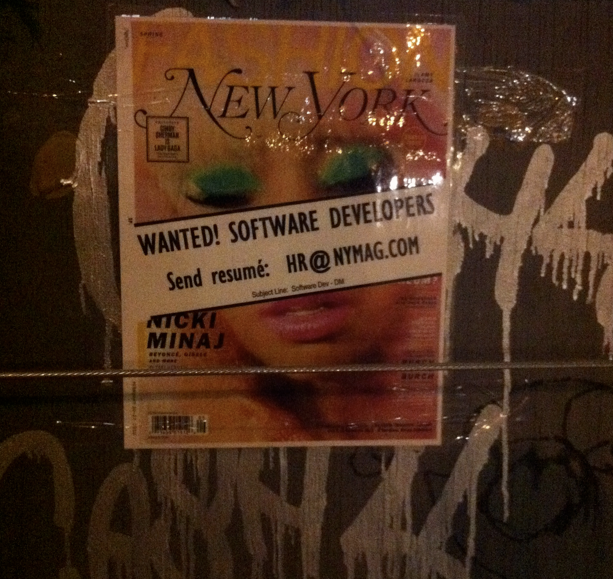 On the not-so-mean streets of Brooklyn’s Dumbo, home to several digital shops, there’s an ad glued to a graffiti-covered wall. It shows a New York magazine cover with “Wanted! Software Developers; Send Resume to hr@nymag.com” plastered across Niki Minaj’s face. The wild posting highlights an important fact of modern media: Tech talent is as important as editorial chops — and hard to find.

One of the secret ingredients to building a powerhouse publication in today’s landscape is having a dynamo developer team. Look at The Huffington Post. Many were astounded at the $315 million AOL paid for it. It got that thanks to a focus on technology, credited to CMS whiz Paul Berry. Similarly, it’s no mistake that Gawker and newcomers like Vox Media describe themselves as quasi-tech outfits. To wit: Gawker built from scratch its own commenting system, placing a big bet on it as a major differentiator. Vox developers came up with StoryStream, an in-page application that shows readers the real-time progression of a story as SB Nation editors work.

The simple fact is these things aren’t possible without developers, quality ones. Tech has long been viewed as a backwater of media companies. That’s changing as media companies seek an edge by developing their own tech secret sauce, whether it’s a hot-shot CMS, app or kick-ass Web design. Content may still be king, but in the age of Facebook and Google, tech is proving emperor.

“It’s going to be tough to run a successful media company without making a commitment to having smart technical talent and the other product development folks you need,” said Michael Silberman, general manager of digital media for New York magazine, which has 30 developers among its 250 employees. “The smarter uses of tech in the service of journalism and the creation of great digital media — figuring out how to do that — those collaborations are important to success, and companies that don’t do that will be left behind.”

There is a problem in this rosy tech-meets-content vision. Developers often don’t want to work for content companies. For quite some time, content companies did not see the importance of developers, viewing them as pretty much indistinguishable from the weird IT guy you’d call to fix your wonky monitor. Like any profession, developers want to work with like-minded and smart peers. Content companies haven’t been the place for that. What’s more, the hacker mindset — take stuff apart to figure out how to make it better — is alien to most by-the-books publishing cultures.

The challenge of attracting developers also exists for agencies. Tech has turned their world upside down. Agencies built on an art director/copywriter model now need to bring in tech talent, which is tall order since their work environments often are not what developers are looking for.

“Agencies, back in the day, struggled because because they were essentially about the almighty duo of creative and account team,” said Troy Young, president of Say Media, which has a developer team of around 70. “Then innovation came from creative working together with technology. The same thing is true in publishing. For many years, the tech underpinnings of media — print or TV — were fairly established as an operational function.”

There’s also a money issue. Let’s face it: If you’re a big-time developer, Google is going to pay you far more than Conde. The shift to appreciate developers, both in salary and prestige, is a slow one at most media companies.

“They just needed talent — any talent — as fast as they could get it,” said Brandon Stakenborg, a senior developer at Bonnier Media, describing when he was looking for jobs about four years ago. “That is to say, looking for quality wasn’t much of an issue at first, and it showed.

Silberman says since New York magazine is a smaller, private operation, it has the ability to be more nimble. Developers at the publication have built its three mobile apps. They’re also needed for the humdrum of the modern publisher, building the tech behind New York’s photo galleries, its in-page e-commerce functionality, and hacking together a system that ports content from the pub’s old CMS to its new one so that it shows up correctly.

The outlet gives its developers a lot of say in the big tech decisions. It places importance on including developers in the key architecture decisions and on letting them lead the way in tech, and collaborating throughout departments. From the selection of CQ5 for its CMS, to development languages and frameworks, to search technology, these decisions were driven by recommendations from the publication’s development team.

“We are treated better than creative in my opinion, certainly getting paid more, but we are regarded with a lot more suspicion as our job is just naturally much harder to grasp for the layman,” said Shoheen Owhady, senior front-end developer at ad agency Sudler Digital, who also had a stint at the AP.

Of course, there are some larger media companies, like the New York Times, that are making a significant tech investment. But there are still many large media companies, particularly in the magazine world, stuck behind the 8-ball and are just now looking to snag top developers.

“It’s becoming a tech-savvy universe if you’re a publisher,” said Todd Vernon, CEO of Lijit, an online ad company that’s part of Federated Media. “You need to understand your audience better than the next guy, understand what drives revenue. And that involves paying attention and embracing the technologists in the company.”