Why Vonetize is skipping the U.S. for the rest of the world

While most tech executives craft plans to attract new American and European users, Vonetize chief Noam Josephides spends his days thinking about the audience for digital video in sub-Saharan Africa and other emerging media markets.

Josephides co-founded Vonetize in Israel seven years ago to bring top-tier video content to smart TVs and other connected devices. Now in Silicon Valley as well, Vonetize is not focused on the United States. With iTunes, Amazon and other premium video providers dominating in the U.S. and other established Western markets, Vonetize is instead focused on the rest of the world. That’s how Vonetize ended up hawking Hollywood movies and other digital video content to people in 60 countries, from Russia to Nigeria.

“Most media companies feel if it’s not the the U.S., it really doesn’t exist,” said Josephides. “But we found that emerging markets today are quickly adapting to tier-one tech like LTE and broadband. They’re jumping a generation. Across Brazil and the Philippines, smartphones and tablets are penetrating, but what they don’t have are premium content services.”

“Fixed broadband is much less common than in developed markets, both in urban and rural areas,” said Dan Bieler, an analyst at Forrester Research. “Fiber to the home is a rarity. Hence, video streaming is mostly limited to mobile broadband, which in turn limits the appeal to shorter video clips rather than full-length feature films. And data pricing can be steep in emerging markets, which limits the addressable market to the better off.”

Vonetize operates several direct-to-consumer services, such as the Bollywood Channel, which the company claims has over 500,000 registered users across the Google Play app store, the Amazon app store and Samsung smart TVs. Its primary brand is SmartVOD, which features content from Disney, Warner Bros, MGM, Miramax and other premium content providers. Vonetize supports every monetization model, including digital purchases, rentals, subscription and ad-supported streaming, though the implementation varies from country to country. 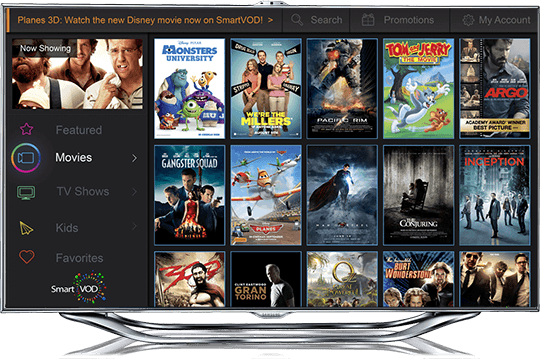 The company’s biggest challengers are more familiar names, including Netflix, YouTube and iTunes. But even in regions where all of those services operate — Brazil, for example — Vonetize aims to compete on pricing, content and features. “We are bringing them new releases from all the studios with a pay-per-view model, in 4K streaming,” said Josephides.

Vonetize’s largest customers are actually device manufacturers, such as Samsung, LG and Toshiba, which pre-install Vonetize’s services on their devices in certain territories. In Africa, for example, Vonetize operates Aflix by SmartVOD, a streaming video service active in over 30 African countries, including Nigeria, Ghana and Kenya. Samsung includes the app on every Smart TV it sells in those countries, except South Africa.

“Africa is definitely a huge opportunity, and one that many companies are afraid of, because there is no credit and debit card operations, it’s mainly a cash market,” said Josephides. “People are paying with minutes from their cell plans or cash vouchers, and you have to support all these systems. Monetizing in these areas is a huge challenge, but we’re taking it face-on, because being first to market there and being the only Hollywood service in these countries is a huge opportunity for us.”

Even if only tens of thousands of those people have the means and desire to stream premium video content, that can add up to millions of users across the globe, said Josephides. Vonetize had more than 3 million customers worldwide, according to the company. But supporting all those products and relationships in dozens of countries is no easy task.

“Localizations and customizations are starting to take a toll on the one single product that was always our vision,” said Josephides. “We encounter brand names of smartphones we never even heard about, there are issues of if they support our [digital rights management] and encryption modules. And there are all sorts of cultural sensitivities. But we are learning the market and moving along.”