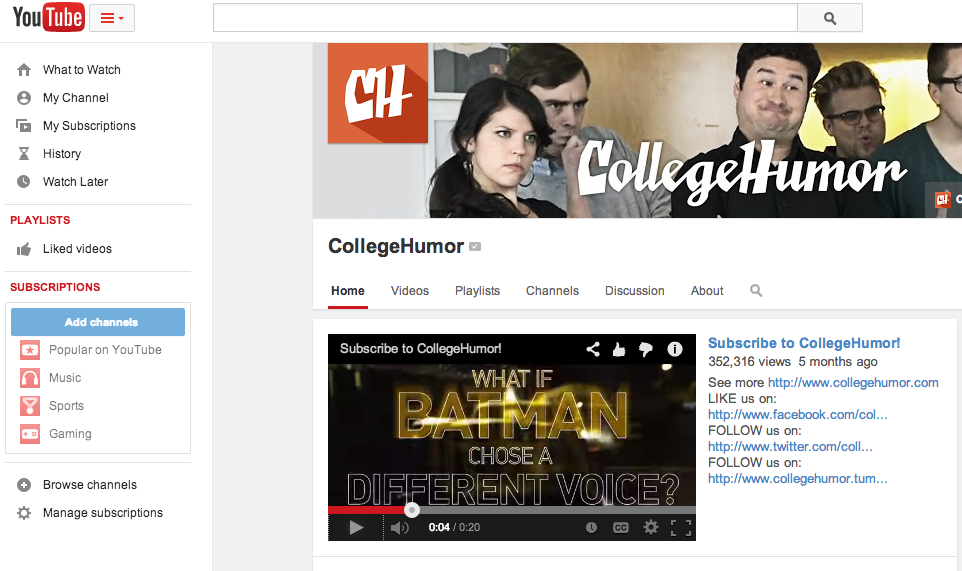 For CollegeHumor, YouTube is no laughing matter, even if it doesn’t produce much direct revenue from ads.

With over 7.6 million subscribers, CollegeHumor has crafted a YouTube strategy that isn’t relying on making money directly on ads. Instead, it uses what is the world’s second-largest search engine to test content’s virality and distribute brand content for advertisers.

“With such a big subscriber base, we get a very early sense of what the reaction to the video will be,” said Van Veen. “If it’s a hit (say, the Adam Ruins Everything videos), we can make a decision right away to put more similar videos into production and blast the link out to all our partners.”

In that sense, the immediate reception or popularity of any given video on YouTube helps inform subsequent production and marketing decisions at CollegeHumor.

But the biggest perk surfaces during CollegeHumor’s sales meetings. When the site pitches brand-sponsored content to clients like American Eagle, it promises those videos will reach its huge YouTube audience as well as its own site visitors.

Many digital publishers, from the older companies like the New York Times to startups like Vox Media, have embraced a hybrid video strategy. They host videos on custom players, or use software from vendors like Ooyala and Brightcove, to serve their own, more profitable video ads.

That’s CollegeHumor’s approach. It hosts videos on its proprietary player first, keeping all the ad revenue generated by each video view. After a few weeks of exclusivity, CollegeHumor will post that content on YouTube, maximizing its reach.

Even though YouTube owns a fifth of the U.S. digital video market, the constant deluge of content (100 new hours of video every minute) depresses ad rates and leaves all but the titans of YouTube with a tiny slice of the total ad spend. Publishers aren’t keen on YouTube’s revenue split, either — the company keeps 45 percent of ad revenue for itself — but YouTube chief Susan Wojcicki firmly refuses to reconsider the rates.

“I don’t see [the revenue split] changing, so it then just becomes a ‘what you make of it’ situation,” said Van Veen. “That means having YouTube be a part of an overall package for an advertiser.”

YouTube ads do generate a bit of cash for CollegeHumor. While Van Veen declined to disclose exact figures, he said ads sold on the channel have eclipsed CollegeHumor’s video production budget for the past six months. But CollegeHumor isn’t making the next Avatar movie; most of its videos are low-budget sketches shot in the office. And Van Veen makes clear that YouTube ad revenue is not the main draw.

“If you’re building a big business solely on remnant YouTube video ads, and your name isn’t Google, you’re going to have a tough time,” he said.

Some other publishers, like music site Pitchfork or tech site Mashable, lean even more heavily on the video-streaming giant. YouTube is the primary hub for their video content.

CollegeHumor is not alone in looking beyond ad revenue when evaluating the worth of YouTube. Music publisher Pitchfork, for instance, has seen “dramatic growth” in its international video traffic, thanks in large part to YouTube’s global audience, said Pitchfork’s video vp, RJ Bentler. While monetization of that audience still seems undervalued, he said, it wouldn’t attract that level of attention without YouTube. And a smaller publisher like Pitchfork is unlikely to monetize that international traffic very effectively on its own.

“Unlike other online destinations, including Pitchfork.com to some degree, people are there for the sole purpose of watching video, and most of the time, they’re willing to watch more than one piece while they’re there,” Bentler told Digiday.

It’s a similar story at Defy Media, which has a combined 37 million YouTube subscribers across properties like Smosh, Clevver and Break.

“I don’t necessarily think it’s [YouTube’s] sole responsibility to monetize our content,” said Keith Richman, president of Defy Media. “There’s a lot of future opportunities there, but today, YouTube is a wonderful marketing platform that effectively allows us to build up our brand for free.”

That attitude may be the safest publisher approach to YouTube, shielding them from changes outside their control, said Forrester analyst Jim Nail. No other digital video portal rivals YouTube’s reach, so it’s a great place to build an audience, but not necessarily the best place to keep one.

“As a publisher, the more you can control your destiny, and the more direct relationship you have with your audience,” he said. “That’s really important for the long-term strength of your business.”