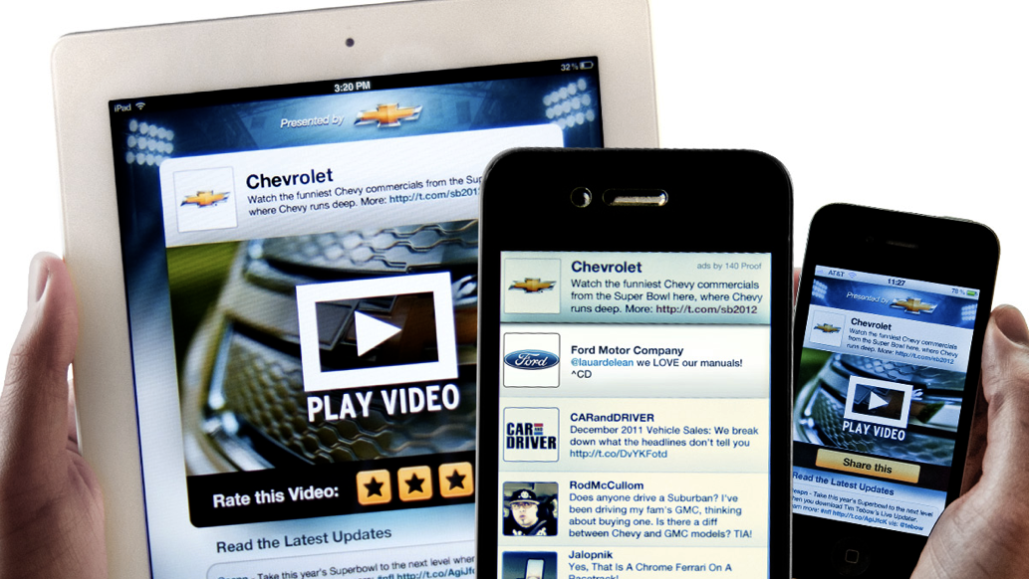 Twitter is inching toward an ad platform, but it seems every step the company takes in creating its ad platform is just an effort to play catch-up to the third-party companies that are working much faster to address brands’ and marketers’ use of the social-messaging tool.

That’s why the real innovations in Twitter as an advertising and marketing tool are most likely to come from outside. Twitter has set itself up as an uncommonly open platform. That’s meant that all manner of innovation — search, photos and mobile app — have happened outside of the company itself. The same is happening on the marketing side.

Take ads for instance. You can now buy video advertising that appears in people’s tweet streams. But you can’t do that via Twitter, which has confined its ad products to basic offerings like promoted trends, accounts and tweets. The video ads in tweet streams are coming via social ad net 140 Proof, which launched an in-app social-video ad unit that appears at the top of the user’s stream. The ad has a link that triggers an in-app behavior that will open up the player right in the stream.

As a trial run, 140 Proof worked with Chevy during the Super Bowl to test the in-app ad unit. Chevy ran multiple simultaneous campaigns with 140 Proof, some using the new video ad unit and some using the existing 140-character ad unit. The result: Chevy saw 120,000 downloads of Chevy’s app, Chevy Game Time, because of the ad. It generated 50 million impressions over two days.

Twitter’s been content to let others take the lead in other areas. Twitter’s content dashboard came after the social network purchased Smallthought Systems. On the publisher side, Twitter rolled out Twitter Web Analytics, a tool to help content providers understand how much traffic they get from Twitter, which came from the company’s purchase of data analytics service, BackType.

“Whether they deliver these ad innovations or license,” said 140 Proof CEO Jon Elvekrog, “I think there’s a lot of innovation that comes from small startups that large companies have an interest in.”

That means for now Twitter is going to let others do the work for it when it comes to building out ad products for brands. It’s no coincidence that Twitter’s big release in ad products was a self-service ad platform that’s designed for marketers of all stripes. This isn’t the kind of thing that gets the Cokes and Nikes of the world excited.

“When you build a self-serve platform, 90 percent of revenue comes from direct-response marketers,” said Arnie Gullov-Singh, CEO of Adly, which pioneered the use of celebrity Twitter endorsements. “Any kind of third-party ecosystem around Twitter is going to be a service business.”

While Twitter continues to figure out its model — and more importantly for marketers, how to help brands deliver its messages to its audiences — those waiting for Twitter to develop advertising innovations might be better served looking beyond the social network and out towards these third-party companies.

“There are smart innovations that come out of an ecosystem first,” said Elvekrog.