Time Inc. UK doesn’t have one single blockbuster site. Instead, it relies on more than 60 properties in tech, fashion and lifestyle, with household names like Marie Claire and NME, a music title. Now, it’s aiming to implement a smart data strategy and rethink its internal structures.

As a first step, it brought on on Krux as its data-management platform (DMP), to be a central repository for data Time Inc. UK scoops up from its sites, subscriber base, events and e-commerce transactions. Its DMP has been fully operational for the last three months. Now, it’s using that data capability with an existing product called Amplify, which it first launched with RadiumOne in 2013. This way, it’s able to segment users and retarget them on sites well beyond Time Inc. UK properties.

This data segmentation is helping Time get most out of its sponsorship deals, which it estimates accounts for 25 to 30 percent of its ad revenue. For example, say you’ve just read an advertorial by L’Oréal in the beauty section of its fashion title Marie Claire. Now, it’s able to profile that user and retarget them on behalf of the sponsor of that advertorial with a co-branded message. The DMP also enables it to cross-check users with a brand’s existing customers, meaning it only retargets users that are fresh prospects.

Here’s an example of a Mazda ad that ran on Time Inc. UK’s Good to Know site It combined Time Inc U.K.’s content around kids with Mazda creative around their utility vehicle. In this version, the user initiates whether they see Time Inc. UK’s content or Mazda via the expand button. 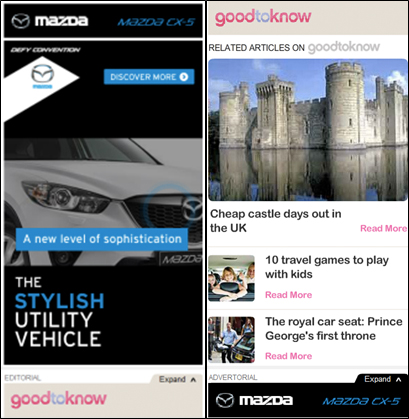 “The rise of programmatic had flattened out premium publishers’ brand values. It didn’t recognize them. Now, the data is there to put [that brand value] back into the mix and demonstrate the value of your audience,” said Sam Finlay, head of digital and custom solutions at Time Inc. UK. “We’ve got quite granular data now — data we didn’t know we were sitting on for a long time. All of a sudden, we’re in a position to start running performance campaigns that using our audience data because we’re able to identify intenders on our site.”

Time Inc. UK hopes this approach will appeal to ad buyers on the hunt for both native and programmatic. There’s an overall understanding that the customized aspects of native need a jolt of the efficiency afforded in programmatic buying.

“[The] two-way split of native and programmatic already starting to come back together,” said Jamie Toward, content director at MEC at the Association of Online Publishers’ Native Advertising Forum on Wednesday. “They’re coming together because our clients are moving towards a place where they want a single customer view. They want to understand current and prospective customers across the digital ecosystem, be that publisher sites or their own, using third- and first-party data.”

Technology is just one part of the strategy for Time Inc. U.K. The company has also just restructured its sales teams. In the past, its sales operation was quite fragmented. Agencies would have multiple conversations with its various brand leads. Now, its sales teams are organized by agency, each having a mix of channel and media brand expertise. The next step for Time Inc. UK is to figure out how to work with rival publishers.

“We’re not going into this whole-hog, at least not to the extent some publishers have, by creating a full-blown trading desk,” said Finlay. “But that’s a direction of travel for a lot of publishers, so there is a real debate to have with agency trading desks in that space. We’ve just got to work through a way for us to use that [capability while ensuring the] publisher get paid, the agency gets paid and the clients gets results.”