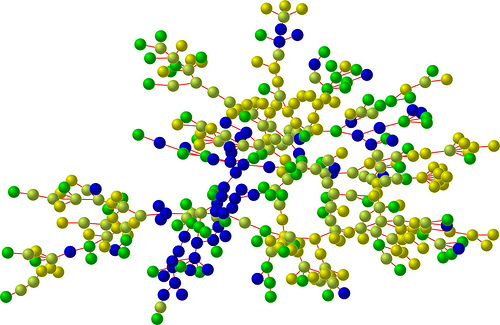 Virtual Contagions: Bill Davidow has a very interesting article in The Atlantic about the idea of thought contagions and how the Internet has fueled the growth and spread of them. Thought contagions (known to us by many different terms, like “bubbles,” “panics” and so on) are ideas that quickly spread and become accepted by more and more groups of people and consequently become the basis for collective action and/or belief. What was once just an idea becomes belief, which causes action, which results in real consequences; and as Davidow points out, what is scary is that today, in the Internet Age, thought contagions go viral at alarming rates and become much more difficult to contain. Davidow worries that Internet-powered thought contagions will encourage extremism on both ends of the political spectrum, which will cause violent civil unrest rather than peaceful protest. Financially Davidow fears that these thought contagions will spread fear and uncertainty, which will make it even more difficult for our global economies to recover from current budget and financial crises. As Davidow sees it, “the Internet will have failed to deliver on one of its greatest promises. Rather than bringing us together, it will be driving us apart. The situations men defined as real will have real consequences.”

Davidow is right in that the Internet has fueled all kinds of panics (political, social, and economic) that have real, negative consequences, but maybe it’s too early to blame and write off the Internet completely. As always, there are two sides to the situation. Just as the Web and social media were blamed for inciting the U.K. riots, they were also important tools in the organization of cleanup efforts. The Internet and social media have helped take despots out of power and have helped people connect to loved ones during and after natural disasters like Japan’s tsunami and earthquake. So yes, the Internet can fuel the growth and spread of thought contagions, but it can also fuel the growth and spread of positive beliefs and actions. The Atlantic

Twitter Account of the Day: I know you have all been waiting patiently for Simon Cowell to join Twitter, and that time has finally come. The overly harsh British judge on American Idol posted his first tweet last Wednesday and already has over 200,000 followers. You can follow him @SimonCowell. Mashable

Ragetoons Are a Thing: So apparently the latest growing Web trend is something called ragetoons, which, as The Daily Dot explains, are a “meme-inspired art form of rage animations. Here is a collection of some of the best ones. The Daily Dot

Tumblr of the Day: You’re parents weren’t always parents. They may have actually been cool before they had you! Check out My Parents Were Awesome to see user-submitted pics of their parents before they were parents.

Video of the Day: Ladies, here is Thad Johnson. Snatch him up before someone else does. Jezebel

Your Future Husband from Bradley Jackson on Vimeo.