‘There is an opportunity in everything’: Hearst Magazines’ Kate Lewis on adapting editorial content in a time of crisis 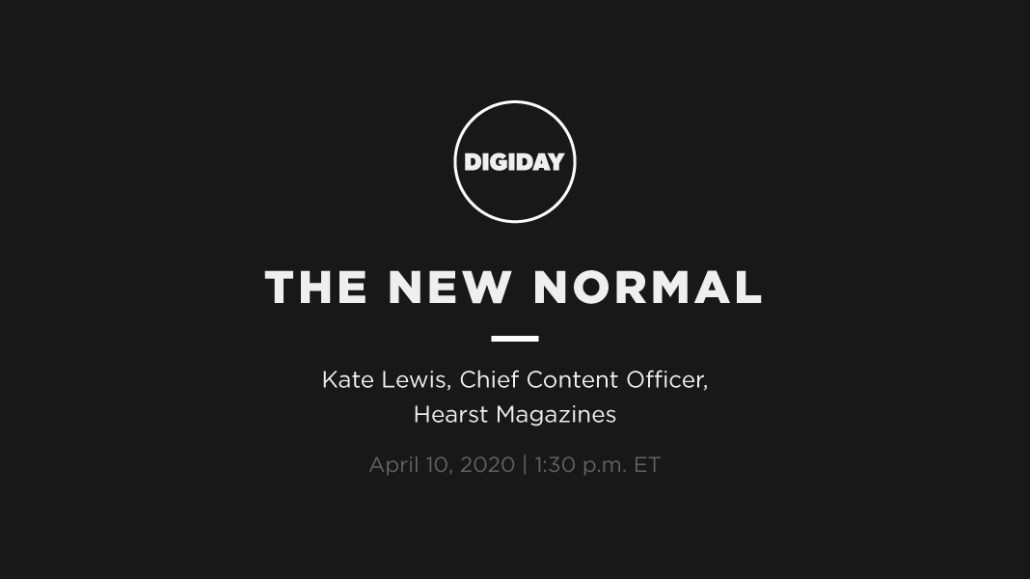 Like every publisher, Hearst Magazines has had to adapt to creating content in an all-remote world, from putting out magazines to pulling off photo and video shoots.

“My motto is ‘enter smiling,’ and I believe there is opportunity in everything,” CCO Kate Lewis said on the inaugural episode of The New Normal, a weekly interactive discussion show from Digiday focused on how media adapts to a new reality.

For Lewis, the biggest takeaway from the pandemic is that “we now live in a multiplatform world.”

“Anyone who thinks they are going to produce media in a singular stream is mistaken, and I think you really see that now,” Lewis said.

Make do on the fly

“We’re capitalizing on the creative talent that surrounds our employees. This is how we’re getting cover shoots done. They’re being shot by friends of the celebrities. They’re a two-men shoot. It’s a whole new world.”

“We have a four points of life mantra at Hearst edit. The first one is to grow audience, the second one is to generate buzz, the third one is to collaborate (which has been incredibly useful for our org for a long time), the last one is experiment to learn. For the past seven years we have had experiment to learn as a point of light for us and something to aspire to has put it in the DNA of the creative team, everything from routing proofs of the magazine on Slack to getting your sister to appear in a cooking show with you. It’s a whole different kind of ingenuity that’s been fundamentally engrained in the Hearst edit team and is now being pushed to its limits.”

“We were very concerned everyone is in hiding. We often have celebrities come in and we shoot multiple videos a day. It’s turned out celebrities are phenomenal shooters. We almost have so much footage coming in we can’t edit it fast enough.”

Low-fi video will stick around

“There will be a hybrid. The one thing we haven’t undertaken is a huge well fashion story for a brand like Bazaar or Elle. I imagine we’ll continue put a lot of effort behind those shoots. But I think you’ll find a hybrid of video. Much of how video distributed is YouTube-like in nature. It doesn’t have to look that polished. We’ll definitely look for the opportunity to look for these big productions, but it’s opened our minds to the quick and dirty version of things.”

This Friday, at noon ET, we are airing our second episode of The New Normal, a weekly interactive show focused on how publishers are adapting their businesses. This week, Politico chief product officer Aaron Kissel joins Digiday editor-in-chief Brian Morrissey to discuss how Politico has changed over its in-person events to be all-digital. Register here.