The Magic Number: You may have 678 Facebook friends and 3,012 Twitter followers, but you don’t have more than 150 friends. In the ’90s, British anthropologist Robin Dunbar, based on his studies on the social behavior or primates, found that humans can maintain no more than 150 relationships. According to new research from Indiana University, social networking sites haven’t changed this number. Researchers studied the network of links created by 3 million Twitter users over four years, carefully observing conversations between tweeters and their networks of followers. They found that when people start tweeting, their number of friends increases until they become overwhelmed. Eventually conversation with less important contacts becomes less frequent, and conversation is focused on and maintained with important contacts. They found that the average number of contacts that Twitter users could maintain was between 100 and 200, just as Dunbar had found. So we may be able to collect more contacts on social media sites, but only up to 150 will be actual friends. Sorry all of you social media people-collectors (although, you aren’t concerned with real friends anyway). Technology Review

Get into YouTube Shape: With all of the competition out there in online video, YouTube wants to get ahead by creating more of its own original high-quality video content, and it wants your help. To that end, YouTube launched a talent search and sent the top 25 winners to YouTube boot camp to help get them into top viral video shape. The goal of the camp was to teach the winners how to create better content, build audiences and strengthen brands. All of this was to the benefit of the winners who began getting some advertising revenue under YouTube’s Partner program, and obviously to the benefit of YouTube. I smell a reality contest show out of this: The Next YouTube Star. NYT

Lonely eSmoker: OMG! Sad, has-been starlette Lindsay Lohan was spotted smoking…e-cigarettes! Remember those dumb electronic things that emit nicotine vapor and light up and vibrate when there is another e-smoker nearby? I doubt Lohan is using them for the social aspect, seeing as she is under house arrest, but instead as a way to scare up some sponsorship dough through the “candid” photos of her e-puffing away. Blu Cigs, the maker of these e-cigarettes, was ready to spread the photos far and wide. TMZ

New Zealand PM Pro Planking: The planking trend continues to spread, going as far as top government officials. The Prime Minister of New Zealand John Key is seen in the background of a picture of his son planking. Unsurprisingly (and unfortunately) there is even a Planking New Zealand Facebook page where the pic was posted. The New Zealand Herald 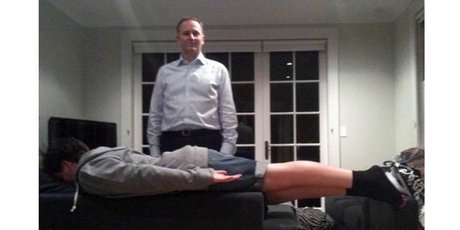 Tumblr of the Day: Don’t you wish you were there? Awesome People Hanging Out Together