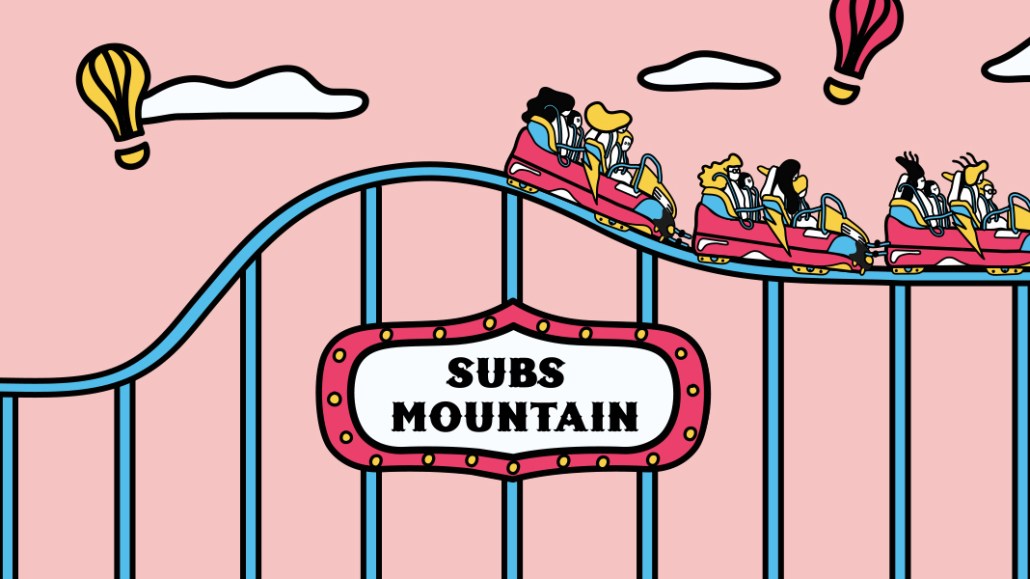 Bloomberg Media, The New York Times, The Wall Street Journal and The Guardian, among others, have all had a boost in new paying subscriptions since the coronavirus. Two months later and aggregate data from subscription technology platforms shows that growth is tapering.

News publishers experienced their subscriptions peak during mid-March, according to subscription platform Piano’s customers, coinciding when most companies mandated remote working. Two months later, the curve in new subscribers is flattening, although weekly growth is still higher than it was pre-coronavirus.

The monthly subscription growth rate for digital news has dropped from three times the average from the previous 12 months in March to 2.4 times in April, according to subscription platform Zuora.

The drops in subscriptions are not felt evenly. Bloomberg Media said it is still seeing growth in subscriptions four times its historical daily average, even with the surge in traffic slowly subsiding. Growth has maintained for the last three months and at a much higher growth rate than pre-coronavirus levels, Bloomberg said.

“The pandemic and its impact on the global economy isn’t going away anytime soon,” said Bloomberg Media’s global head of subscriptions and consumer marketing Lindsay Horrigan. “We’re uniquely positioned with our global business content to be a critical resource for people navigating the world now and for months to come.”

The New York Times increased digital subscription by 587,000 in the first quarter, 80% of net new subscribers were for news, highly driven by coronavirus content. That’s three times more new subscribers than the total subscriber base of the Los Angeles Times, leading industry onlookers to debate how publishers are dwarfed by The New York Times’ success. Early signs show healthier retention from new subscribers compared to those that predate the coronavirus, suggesting these readers are more than fair-weather friends. According to its earnings call last week, The Times is starting to see anonymous traffic come down although the baseline interest in the news is still high.

“While the news environment will change as it always does,” said CEO Meredith Kopit Levien on its earnings, “we expect that the larger number of registered readers and our growing effectiveness at getting them to return and form a habit will mean an improvement in the underlying rate of net additions versus the period prior to the crisis.”

Indeed, some, often larger, publishers will sustain their subscriber increases better than others. Those with multifaceted data-based circulation strategies that have been in place before the coronavirus and who use broader marketing messages beyond keeping up with the latest news will ride the wave for longer.

The Guardian, for instance, saw supporter spikes after Trump’s election and breaking the Cambridge Analytica story. While there is always some churn, largely these people have stayed, said a spokesperson. In the case of coronavirus, the relevance of the news story is much more universal.

Each day The Guardian shares a list of 10 of its most-well read non-coronavirus articles, the antidote. In April, the Guardian added an additional 50,000 recurring supporters, with each range of Guardian support, like patrons, members and digital subscriptions, growing between two and three times faster than usual. In March, The Guardian had 821,000 recurring monthly supporters.

The leveling of the subscription peak is not so much of a surprise as the news has become more routine and readers are settling into habits, said Michael Silberman, senior vice president of strategy at subscription platform Piano. “This is looking like a sustained trend at this point. Buying digital subscriptions is higher than pre pandemic, I assume this has to do with publishers’ marketing subscriptions more progressively, the changing user habits and consuming essential news.”

For instance, financial markets publisher Seeking Alpha pulled all its programmatic ads from the marketplace in early February, before the crisis hit, and handed them to its subscription marketing team, (it hadn’t suffered from drops in programmatic ad rates like some publishers). In April it grew nearly four times as many subscribers compared with February.

“We’ve made the psychological shift to being ‘subscriptions first’ and our total revenue and cash rose in March and April,” said founder David Jackson. “Retention of new subscribers is a high priority.”