How The Lad Bible blurs editorial and advertising 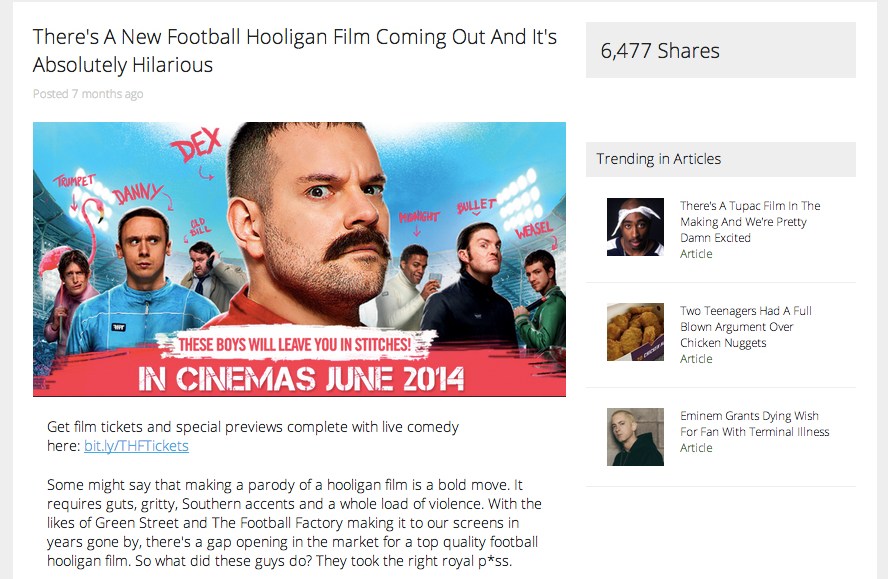 U.K.-based 65twenty, publisher of The Lad Bible, is a clear hit among millennial males, having cornered the pop culture market in the U.K. with millions of followers on Facebook. Its native advertising policy, however, is a bit of a murkier affair.

The Lad Bible has been diversifying the content it offers on the back of its success. Having initially focused on viral videos and user submissions, it now writes its own content on everything from national politics to upcoming film releases. Headlines like “There’s A New Football Hooligan Film Coming Out And It’s Absolutely Hilarious” covered the upcoming release of The Hooligan Factory. The filmmakers couldn’t have dreamed of a better advert for their film. Perhaps because that’s what it was.

Advertisers like Unilever and Campo Retro are also running ad campaigns on Lad Bible that look like editorial. There’s “7 Different Types Of Football Fan”, sponsored by fashion brand Campo Retro and “So England Are Home From Brazil… What Next?”, were paid for by Unilever to promote its Pot Noodle. These ads went undisclosed.

Not all sponsor articles lacked disclosure. For “5 Reasons Why Pot Noodle Is A Better Wingman Than Your Mate”, Lad Bible included “article sponsored by BBQ Brazilian Pot Noodle” at the foot of the article.

The U.K. Advertising Standards Authority has begun acting against publishers with lazy disclosure standards. Last November, it banned YouTube videos from “Dan and Phil” for failing to disclose they had been sponsored by Oreo.

The Committees of Advertising Practice (CAP) write and maintain the UK Advertising Codes, which are administered by the ASA. “It’s recommended that paid for articles should state ‘ad feature’ or similar at the top (even if a tweet makes it clear, as people aren’t only going to reach an article via a tweet),” said Matt Wilson, communications and marketing manager at the Advertising Standards Authority.

The Lad Bible responded with the following statement: “No piece of content is published by us unless it is worthy of being on the site. We have a lot of content on our site that may recommend a product or service but is not sponsored. Part of our job as a community site is to show our users new things that we think they will be interested in. The issue of sponsored content is an evolving area and, of course, one which we are looking closely at.”

The Lad Bible holds considerable influence over its target demographic on social media. Its main Facebook page has nearly 8 million likes and its Sport Bible site has 5.5 million likes. It’s also beginning to translate this reach into cash. BuzzFeed estimates it earns £100,000 ($150,000) in a typical month through advertising.

The company appears to have done particularly well out of Facebook’s policy to promote more video. Its regular posts often exceed thousands of shares and likes, but its video posts are frequently hitting many millions — and they’re not just cat videos. This Facebook video post about a Charlie Hebdo rally in Paris received 4.5 million views so far:

For a media brand that has begun covering broader social and political issues, its native advertising policy deserves scrutiny. Ads for films and Pot Noodles going undisclosed is one thing, but political advertising is another, argues Tom Pepper, UK managing director of Vibrant Media in 12ahead.com.

“Without clear transparency policies, there’s little to stop a UK political party placing native advertising within a digital publication that consumers trust without making absolutely clear that the messages the party wants to convey are not editorial content,” he said. “Any problems the U.K. might experience with political native advertising will be dwarfed by those experienced in the U.S. for the 2016 presidential election. The U.S. is far less regulated and political parties’ budgets for advertising are astronomical.”

Some might argue that this distinction between ads and editorial matters less to the Lad Bible’s target audience. If the content is good, the argument goes, it doesn’t matter where it came from.

At least one agency leader says this argument doesn’t stick. Doug Kessler, co-founder and creative director at B2B content marketing agency Velocity Partners, has been vocal about the problem of undisclosed native ads. “I wondered if my concern about native advertising was just me being old fashioned, so I asked my daughters, aged 20 and 16, what they thought. They had similar reactions to me,” he said. “They said they’d feel betrayed if what appeared to be a genuine article was a marketing set-up.”