The Filter: Twitter Ad Revenue Expected To Hit $1B 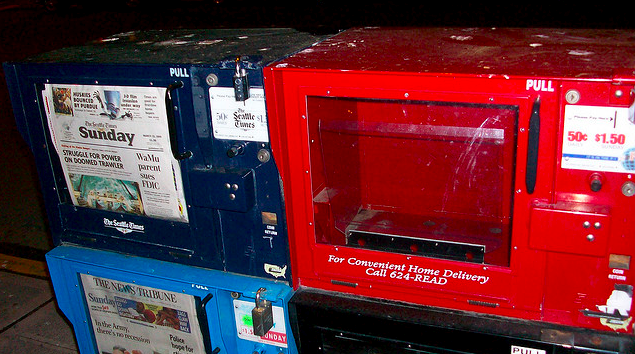 Analysis: In scare for newspapers, digital ad growth stalls
Not so good news for newspapers, Reuters reports. According to the Newspaper Association of America, in the first quarter, digital ad revenue rose only 1 percent from the same time last year. While digital ad revenue is screeching to a halt, many of the nation’s largest publications — the New York Times, Wall Street Journal, Gannett — have built paywalls (or some variation of) to drive some kind of revenue.

A flood of excess advertising space, the rise of electronic advertising exchanges that sell ads at cut-rate prices, and the weak U.S. economy are all contributing to the slowdown, publishing executives and observers say. For an industry savaged by the erosion of print advertising dollars, significantly boosting digital revenue is necessary for survival. But the double-digit online growth rates that many newspapers used to enjoy — and on which their hopes for a prosperous future rest — could be a thing of the past.

Twitter Said To Expect $1 Billion In Ad Revenue In 2014
Bloomberg reports Twitter is on pace to hit the cool $1 billion mark in ad revenue in 18 months. The forecasts, based on expected advertising demand, can be a window into future iterations of Twitter’s ad products, which appear to be drawing the attention the ubiquitous social network had hoped.

Demand for advertising aimed at Twitter’s more than 140 million users is benefiting the company. Researchers at EMarketer Inc. have said that in 2014, Twitter will reach $540 million in ad sales, which make up virtually all of its revenue, up from $139.5 million last year. Even so, it will take Twitter longer to generate $1 billion than bigger competitors Facebook Inc. (FB) and Google Inc. (GOOG)

Twitter has stepped up a campaign to induce marketers to devote more of their ad budgets to its service, which lets users post messages of no more than 140 characters to followers. Twitter, which unveiled its first ad offering in 2010, started a self-service platform this year to reach more small businesses. It also recently expanded mobile-ad services.

Facebook Will Disappear in 5 to 8 Years: Analyst
Few are riding high on Facebook these days. The company stumbled out of the IPO gate and has yet to regain its footing. CNBC reports that this may just be the beginning of the end for the social network gorilla as the company, besides its current awful stock price, has missed out on the coming next iteration of the Web: mobile.

Facebook will lose dominance as a major Web company in less than a decade, Eric Jackson, founder of Ironfire Capital said Monday on CNBC’s Squawk on the Street. “In five to eight years they are going to disappear in the way that Yahoo has disappeared,” Jackson said. “Yahoo is still making money, it’s still profitable, still has 13,000 employees working for it, but it’s 10 percent of the value that it was at the height of 2000. For all intents and purposes, it’s disappeared.” Jackson said there have been three generations of web companies. The first generation was big Web portals, such as Yahoo where content was aggregated in one place. The second was the social web with Facebook and the third generation is companies focused entirely on monetizing the mobile platform, something Facebook will continue to struggle with, Jackson said.

Ad Networks Bypass iPhone Privacy Rules
The Wall Street Journal reports that mobile ad networks are approaching new ways to go around Apple’s user privacy. The Journal also reports that FTC is looking into broader mobile tracking technologies to see if or how the tech is violating consumer privacy. As in every other privacy discussion, the marketers say what they’re doing is within the law and are not invading people’s personal information and privacy advocates say, according to the Journal, that marketers may “eventually acquire enough information to link the data — such as consumer habits, location and personal preferences — back to a person’s name.”

To avoid the limits of Apple’s rules, ad networks that serve advertisements within mobile apps have started using new identifiers that collect information like location and preferences as the user moves across apps. One of the tracking systems is based on a unique identifier located in the iPhone’s wireless networking hardware—a system known as Open Device Identification Number, or ODIN. The other prominent tracking alternative, called OpenUDID, uses the device’s built-in copy-and-paste function. These networks claim they will lose millions of dollars a week in revenue unless they can gather personal data from users to better target them. Privacy advocates argue these new techniques could allow marketers to identify individuals and violate unsuspecting users’ privacy.

AOL’s Patch: Big Losses on Hyperlocal News
Hyperlocal news has not lived up to its potential, according to this BusinessWeek article. In 2009, blogger/professor Jeff Jarvis predicted the hyperlocal ecosystem was going to boom. Instead, it has burst. The article highlights AOL’s Patch, a service destined to come up short because of lack of demand from consumers and a lack of advertising. The broader issue with hyperlocal is that expectations — from traffic to eyeballs — can never be met.

A big part of the problem is that display advertising—the expensive banner ads that serve as the financial engine behind most media sites—has fizzled at the local level.
[…] Exacerbating the situation, the Patch sites include a box of text ads served by Google. Starboard estimates that local businesses can buy a Google text ad on a Patch site for just 5 percent of what Patch’s salespeople ask for a display ad. And big advertisers were never seduced. According to a survey conducted by Starboard, national advertisers consider hyperlocal sites an inefficient way to communicate with large numbers of consumers. The report quoted one anonymous “senior advertising agency director” saying that “our clients have never asked us for hyperlocal advertising, and we don’t see a need with a national product.”