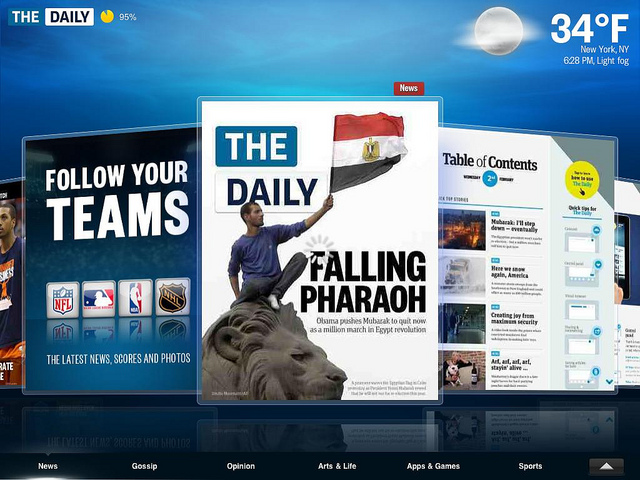 After almost two years, News Corp.’s grand tablet-based experiment known as The Daily came crashing to a halt when it was announced that it’s closing shop on Dec. 15.

The post-mortem on the effort will point fingers in many directions. There’s a case to be made that The Daily’s failure is not so much of its own making but is actually an indictment of the notion of iPad publishing. In that case, you could say that the real culprit was Steve Jobs.

“The Daily was already the top downloaded news app in the app store, which leads to question the iPad-publishing model in general,” said Ian Schafer, CEO of Deep Focus. “If by being the No. 1 on the platform isn’t successful enough, maybe something on the platform needs to change. I’d argue Apple has as much to do with that as The Daily.”

That said, The Daily and News Corp. weren’t blameless in hastening its demise. At several turns, the publication made bad bets. Hindsight is, of course, 20/20, but it’s now clear these decisions were major factors in The Daily’s collapse after just 22 months.

The first error was in its business model. The idea was The Daily would thrive by coupling an ad model with a subscription base, something most publications ignored in the rush to the Web. The problem is that not enough people thought the product The Daily produced simply was that valuable. It lured people in with free subscriptions, only to lose them when it came time to actually pay $40 a year.

This big bet on subscriptions, tethering The Daily to Apple’s tablet platform, didn’t pay off. It not only didn’t pay off financially, but it revealed a fundamental business-design flaw. The Daily operated in a vacuum, cut off from the wider Web that doomed it to irrelevance.

“Fundamentally, the issue is The Daily wasn’t connected,” said Adam Lavelle, chief strategy officer at iCrossing. “It was literally a walled garden. It didn’t have a lot of connective tissue to the live Web. The value proposition was a little bit tenuous. News is sourced socially into experiences consumers find digestible. The Daily was a news factory that had a digital distribution platform, but it wasn’t connected. Once you were in The Daily, it wasn’t connected out to other things.”

This had a cascading effect. Operating on an island, stuck in a subscription straitjacket, The Daily simply couldn’t attract a large enough audience. It amassed just 100,000 readers, a pittance in the digital world. Its splashy launch had advertisers like Verizon, Virgin America and Pepsi. But advertising is about scale. Without it, there’s not much for even the best ad sales people to sell.

At the same time, The Daily had champagne taste on a beer budget. It had a staff of about 200, which is simply an untenable cost base for a publication creating such a tiny audience. It would have been better served to start small and grow, and temper expectations.

With such a small audience, The Daily could not compete on scale. It admirably took a less-is-more philosophy with its ads. Instead of cluttering up a page with the desktop riot of banner ads, it sold only full-page interactive interstitial. That’s a tough sell when your audience is so small. “Richness of an ad doesn’t make up for the fact that circulation isn’t high enough,” said Schafer.

In the end, it’s easy to say The Daily was doomed from the start. After all, many said just that. The hope is that the mistakes it made will at least provide a road map of the pitfalls for those to come in trying to figure out a modern publishing model for the post-desktop era.