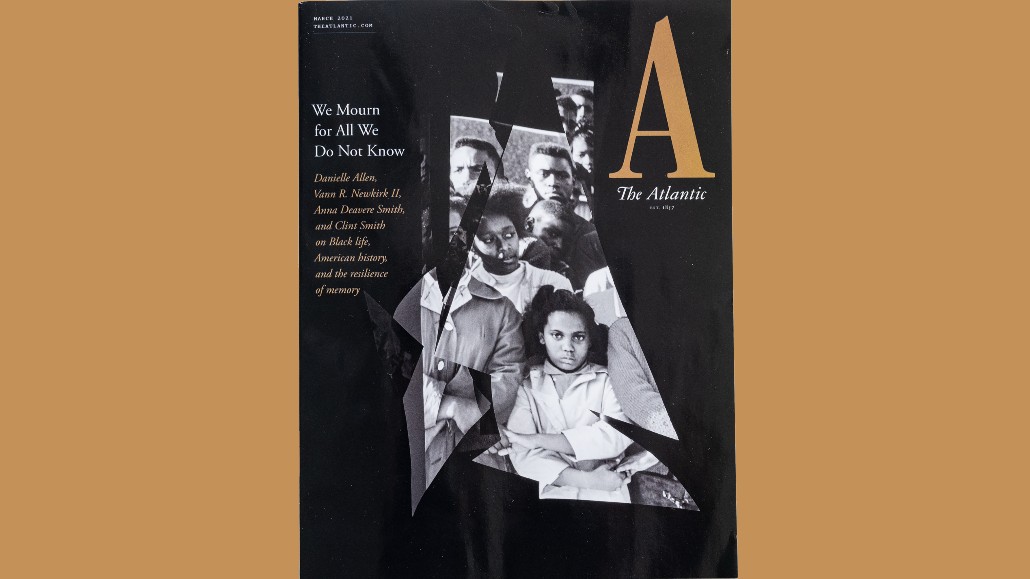 The Atlantic is setting out on an 18-month journey to uncover Black history in America, with initial sponsor Salesforce that’s willing to support it with a seven-figure deal.

This partnership is coming to fruition at the same time that the advertising world had renewed its interest in supporting Black stories, thanks to the Black Lives Matter movement last summer and right now during Black history month.

This package, called “Inheritance,” went live on the publisher’s website on Tuesday featuring a series of essays and stories categorized in chapters to help organize the centuries’ worth of content. The first chapter, as an example, is titled The Stories We Tell Ourselves, and covers how Black history is presented in school with an essay by The Atlantic staff writer Clint Smith and a poem by American poet Joy Priest.

Inheritance will live on other platforms, including in the March issue of the magazine, which is devoted to the project, and through special episodes of The Atlantic’s The Experiment podcast series.

The Atlantic brainstormed this project for two years, said Gillian White, managing editor of The Atlantic and the editorial director of the Inheritance project. It represented one of the largest editorial undertakings in her seven years at the publication, she added.

“I wanted to make sure that we got it right and we did our due diligence,” said White.

The Atlantic’s chief revenue officer and publisher Hayley Romer said she first pitched the editorial package to Salesforce last January to come on board as a sponsor, securing the monetary support of the product a year before it was set to launch.

Romer would not give exact terms of the deal, including exactly how much money the partnership was worth. She did say the deal represented one of the largest partnerships of the year so far. There is the option for Inheritance to sell for other sponsorships besides the Salesforce partnership as well.

This partnership starts in Black History month, a time when brands and marketers pitch Black audiences and support causes that are important to Black culture in America. Many have received criticism, however, after their multicultural spends are reallocated to other areas of a media budget after the end of the month.

This year, an effort has been made among Black media companies to convince brands to extend their spend beyond typical times of the year, like February, or following major events, like the Black Lives Matter movement.

“Historically a lot of brands doubled down on talking to their Black audiences during Black History Month, and while that made sense it also smelled a little like tokenism,” said Barry Lowenthal, CEO of media buying agency, The Media Kitchen, who praised The Atlantic’s partnership for its multi-year program. “The Black audience isn’t going away in March, so why should the dollars?”

And while The Atlantic was founded with the belief of abolition at its core, according to White, and Inheritance does editorially uncover the stories of Black people for a Black audience, The Atlantic is not considered a Black publication. In its history, the magazine has never had a non-white and non-male editor-in-chief.

This sponsorship does give Salesforce an opportunity to highlight its tech stack in a new light, however, Lowenthal said.

Salesforce’s sponsorship of Inheritance includes standard media placements and branded content created by The Atlantic that will be slow rolled throughout the partnership. The company has one-page print ad in the March issue, in addition to full sponsorship across the digital project. Though Salesforce is the lead sponsor, it will not have any impact on the editorial process or reporting. The revenue does directly support staffing of the talent associated with the project, a spokesperson said. She added that there are at least 25 people at the publication that have some direct involvement with Inheritance. Of that, 19 are credited on the editorial package for having their hand in the editing and product design.

The partnership is unique, however, in that the company is providing technology to help build a user-facing database for the research that is collected during the project, which will launch in the next six months, said Brad Girson, executive director of Atlantic Ventures at The Atlantic.

The Salesforce technology that The Atlantic is using to create a database of research from this project is still in its nascent stages, White said, but the idea to build it came from the two overall missions that Inheritance was founded with: open, easy access to research and sharing information around personal history.

“We didn’t want all of the information we might find, like research and primary sources, to stay in a reporter’s notebook or in a reporter’s brain. As an editor, I know so much gets left on the cutting room floor,” said White.

Since this project emphasizes uncovering the often buried history of Black people in America, White added the importance to her team to allow readers access to all the information to understand their own history.

There is a “very personal nature of wanting to understand your own history and wanting to be in conversation and community about that. We wanted to find a way for people to be able to satisfy that need and that desire with that project,” said White.