How The Telegraph Monetized its iPad App 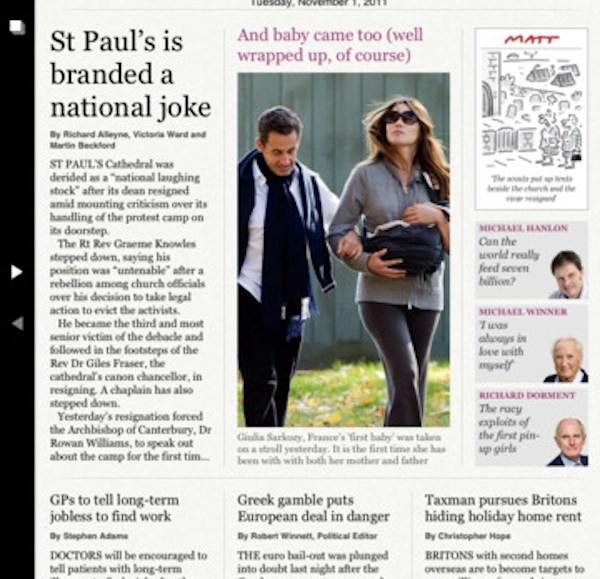 With a fractured landscape, from both a content and device perspective, publishers grapple daily with finding the best ways to reach and maintain their readers. In the mobile world, the introduction of lean-back (tablet) devices has slightly changed the game. Consumers behave differently on tablets, and they consume content differently on these devices as well. Therefore, both the user experience as well as the advertising opportunities on a smartphone app should be different from those on a tablet app.

The UK’s Telegraph Media Group, realized early on that the tablet strategy had to differ from a mobile strategy. In 2010, it launched its first iPad app. It gave readers a six-month free trial period, so that it could monitor their behavior. The publisher found that readers wanted curated news. Additionally, the app drove loyalty and retention, with 111,000 consumers returning to the app continuously. What’s also interesting is that when the publisher examined the time of day when users accessed The Telegraph with their iPads, it found that usage spiked in the evenings. The Telegraph introduced a night-reading mode to accommodate these users.

With these findings in mind, in 2011, the company released its second iteration of its iPad app. This was a paid version. Working with Webtrends to measure specific metrics, The Telegraph looked to learn how to build readership and then monetize the mobile property. It decided to put the brakes on targeting, for content and ads, until it reached a large enough audience. The outlet has experimented with different types of content — curated, in-depth, audio, video — that not only helps readers, but advertisers as well. New forms of content, as well as understanding its audience has helped the publication with different revenue streams. The Telegraph looks at page views, number of visits, time of day of visits, day of week, app version, most-read stories and more to figure out what the opportunities are from an advertiser’s standpoint. The Telegraph’s learnings will help advertisers create more effective and relevant ads.

The Telegraph found its iPad readers interacted with ads six times longer compared to desktop viewers. Also, as engagement was high, people shared content (which meant advertisers should see this as increased circulation) and read more earlier and later in the day than desktop viewers. Currently, Telegraph for iPad ads are full-page interstitials. The company does, however, plan to examine different ad formats and ways of selling them, on the app downloads themselves or, better yet, page impressions. The company claims this will avoid the potential problem of 10 people downloading an app but only one using it. The publisher plans to experiment with different CPM and sponsorship models.

What’s next for The Telegraph? It envisions itself moving from being centered on print content to be a mainly digital entity, with a print presence as well. The publisher has learned that measurement and monitoring of user behavior is absolutely key to success in digital. Understanding mobile behavior goes beyond simple clicks and app downloads. What other publishers can learn from The Telegraph is that publishers shouldn’t try to do everything all at once. A crawl-walk-run approach is the way to go.

“The apps we’ve deployed have been key in our overall goal to drive interest in our original editorial and video content,” said Mark Challinor, director of mobile and interactive services, UK Telegraph Media Group. “And because [the] apps are extremely engaging and fully branded, they enable us to extend the reach of our content franchises into the social worlds of our fans.”