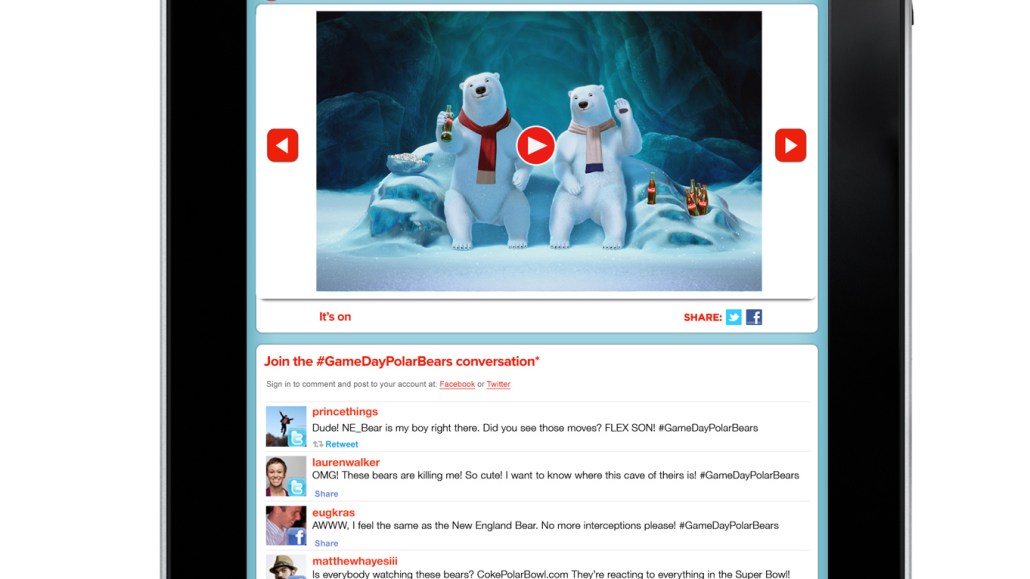 This year’s Super Bowl could mark the true arrival of social TV — or show just how far it needs to go before becoming a reality.

Major advertisers and a range of social TV services are looking to mobile for a boost during this year’s Super Bowl. For brands, smartphones and tablets offer the chance to extend and amplify their multi-million-dollar TV ad buys, while social TV services should be enjoying their busiest day of the year as fans turn to their devices to discuss the action.

The drive to website? Passe. This year’s going to be all about tweeting, Facebooking and checking-in. A good party game to play is take a drink each time “Twitter” or “hashtag” is mentioned. You’ll probably want to secure a designated driver.

As always, brands will hope to extend the effect of their big investment, some $3.5 million per 30 seconds this year. According to Coca-Cola, 60 percent of viewers during next Sunday’s game will be watching with a mobile device within arm’s reach, so it’s tailoring its digital activity accordingly. The brand’s two Super Bowl ads will direct traffic to a Facebook-hosted microsite at CokePolarBowl.com, which will feature a live video of two animated polar bears – one in a New York Giants scarf and the other in a New England Patriots one – reacting to the game in real time. The bears will also interact with users through Facebook and Twitter, and will show off their favorite user-submitted content on their own “bearpads” via the live feed.

The live video feed of the bears won’t be available to stream on mobile devices owing to issues with lag, but tablet and smartphone users will be presented with highlights of the bears in action and encouraged to share them with friends and to interact with the bears via Twitter and Facebook. Regardless of the device they’re on, users will be presented with content that suits the environment, the company’s media and interactive manager, Ryan Anderson said.

“We wanted to make sure we kept the idea simple, and didn’t complicate what consumers had to do to engage with it. They don’t have to download any apps or join anything; it’s just the single domain.” Anderson said the campaign, which was created in conjunction with Wieden + Kennedy and 360i, among other partners, is being hosted on Facebook as it’s already equipped to deal with traffic from a range of devices.

Not to be outdone, fellow cola brand and social aficionado Pepsi is also attempting to extend its involvement with the game to mobile. It’s partnering with social TV service GetGlue to grant users that check in to the game access to exclusive video content and buy-one-get-one-free coupons. It has also partnered with NBC to provide exclusive stickers for the event. GetGlue allows users to collect virtual – and eventually physical – stickers in return for engaging with content.

Meanwhile, Shazam says it’s gearing up for a strong presence during and around the game, powering multiple “Shazamable” ads which will unlock additional content and offers on users’ mobile handsets. The firm’s vp of ad sales, Evan Krauss, said the company has been in discussions with 90 percent of Super Bowl advertisers, with “a lot” opting to partner with it to power custom experiences around their ads. At least one major auto manufacturer has penned a deal with the company, for example.

“We’re really excited about it. Brands spend all this money creating these commercials. and now they can make them jump off the screen and into people’s hands,” Krauss said. He added that events such as the Super Bowl lend themselves perfectly to mobile integrations, thanks its already social nature. “People aren’t sitting with their laptops, they’re out with friends or at bars.”

Then there are the companion apps, of course. Chevrolet has launched one for Android and iPhone devices dubbed Game Time, which will encourage users to interact with polls and interactive features for the chance to win one of 20 automobiles. Its TV spot will drive users to download the app, which is a significant media investment given the multi-million-dollar price tag placed on that inventory.

The NFL itself is also getting in on the action with its official Super Bowl 2012 app. It promises aggregated buzz from players and the social media world, as well as stats and other related content.

Ultimately, though, there will probably be a clear second-screen winner around this year’s event, and that’s Twitter. During last year’s game, Twitter reported more than 4,064 tweets per second were being posted during some parts of the game. Of course, some of those updates come from the types of services and campaigns listed above, but the network is still where the majority of TV-related discussion occurs, especially around huge events like the Super Bowl.

Despite the TV focus of social TV services such as GetGlue, that’s unlikely to change any time soon. The fact remains that for this year, at least, Twitter itself will still see by far the most “second-screen” use.