How Sports Illustrated is relaunching for the mobile era 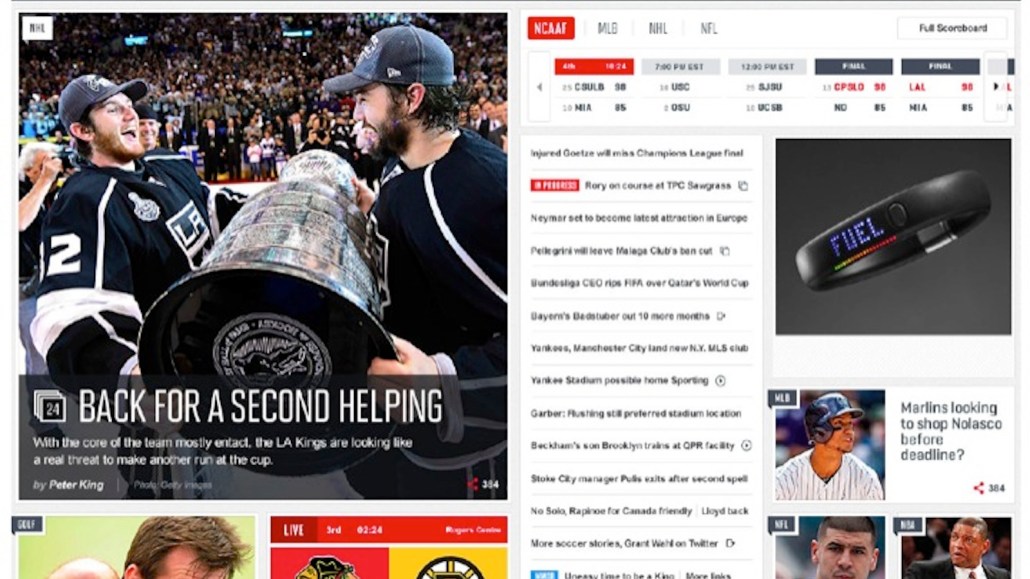 Sports Illustrated is getting a reboot for the mobile world.

A growing portion of SI.com’s online audience is coming via smartphones and tablets, and that’s expected to be over 50 percent by year’s end. But until now, the site didn’t have a responsive mobile site.

In fact, until recently, the Time Inc.-owned sports brand didn’t even run its own business. SI.com has been housed on the platform of Turner Sports, its former corporate sibling, since the late ’90s. In 2010, it merged its digital business with Turner, but that partnership dissolved before long, leading SI.com to build its own platform. So more than just a redesign, SI.com is getting a chance to start from scratch by building a brand-new, Drupal-based CMS.

“What you’ll see is a focus on mobile,” publisher Brendan Ripp said. “Today, everyone’s saying, money is moving around, and it’s all going to mobile.”

The new site that will go live on June 24 is designed for smaller screens in a few ways. It’s built with tile-like templates that editors can move around and manipulate at their will, to better respond to the news cycle and drop in scores of games while they’re happening.

Other features are designed to keep people on the site longer, given that an increasing number of visitors are coming via social. (Users who access a site from social tend to spend less time on the site than those who go straight to the home page.) Article pages will promote other stories in a left-hand column and at the bottom of the page. Bigger social share buttons will respond to the growing role of social media in driving traffic, and the CMS will encourage editors to create different headlines for social (SI.com’s social referrals are up 86 percent year over year).

SI is embracing its socially driven traffic, which has grown dramatically, and it is trying to entice people to stay longer on the site once they arrive, said Paul Fichtenbaum, editor of the Time Inc. Sports Group. “Clearly, the world is going to more side-door traffic. We want them to become regular fans of SI.”

Video will be a bigger part of the site, too. SI’s recently announced video streaming site, 120 Sports, is expected to launch this week and will be integrated into the site, to capitalize on people’s growing video consumption.

SI also is taking into account second-screen viewing. When there’s a big game on, editors will be able to insert scores or other relevant information into an article for the fan who’s reading about the game on their mobile while watching it on TV. Along with the site relaunch, SI also is introducing a new daily fantasy game app, Fan Nation, which is designed to be played while watching a game live.

“The second-screen experience is a must,” Fichtenbaum said. “People don’t go from room to room without holding some device. How do you provide added value?”

The new site also has some innovations on the ad side. Advertisers are increasingly demanding proof that their ads are being seen. SI.com is already guaranteeing that its ads meet the industry standard for viewability, but new features are designed to help that. Ads won’t be loaded (or counted as being seen) until they’re in view on the page, and there’s a new, full-bleed ad unit that gets bigger as the user scrolls down the site. The site also will let advertisers take a native approach by using SI’s editorial templates for their ads.

This is the third big Web relaunch this year for Time Inc. after Time and Fortune and the first since Time Inc. spun off from Time Warner as an independent public company, and with print revenue growth waning, the pressure is on the company to speed up its adaption to the Internet. SI.com’s traffic is up 49 percent year-over-year to 20 million, but it’s No. 11 in sports sites behind ESPN and relative newcomers Bleacher Report and SB Nation, per comScore multiplatform metrics. Smaller entrants like USA Today’s FTW are nipping at its heels, too.

SI has a strong tradition of providing great sports content, and quality matters, said Tony Pace, CMO of Subway. But today people want to get sports content in real time, as well as the ability to be part of the conversation about it, and having a dual print-Web focus and lacking a responsive site hasn’t helped SI here.

The challenge is for SI to translate its trusted brand for the smaller screen and to the speed of the Web without undermining its reputation. “They’re a trusted brand because they’re thoughtful,” Pace said. “What’s hard is, how do you provide that perspective in a real-time world?”