Few publishers can resist the temptation to branch out beyond their core editorial coverage. Look no further than Sports Illustrated. In the past few years, the Time Inc. title has introduced the online verticals SI Edge, covering action sports and fitness coverage; Extra Mustard for pop culture and humor; and various verticals focused on specific sports in efforts to grow its traffic. Now, it’s getting into technology coverage with a new section, Tech & Media.

Tech & Media has a broad mandate: It promises coverage of “the latest on tech innovations, ideas and gear transforming fan experiences, player performance and the sports industry as a whole.” SI’s traffic was flat year-over-year at 14.8 million unique visitors as of April, according to comScore, and with the new vertical, it hopes to attract more young readers.

“Tech has become essential to the sports narrative and the individual sports themselves,” said Chris Stone, who was just named SI’s new editorial director, succeeding longtime group editor Paul Fichtenbaum. “It’s not only apparent in the way teams and players are leveraging technology to gain a competitive advantage but the interaction with technology in our everyday lives.”

Social media will be a big part of the distribution plan. SI has streamed live on Facebook already, mainly feature its own staff. For Tech & Media, it plans to produce a Facebook Live series featuring the subjects of its tech stories. “We want our viewers to see the people we’re writing about and let them tell the stories we’re telling,” Stone said. SI also plans to step up its use of its Snapchat Story this summer to showcase its tech coverage. 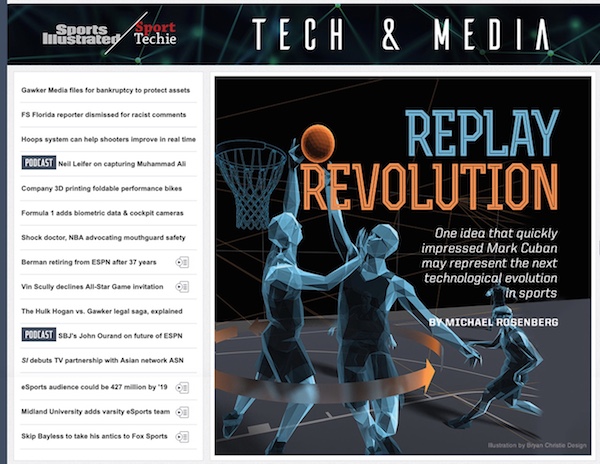 Publications from Refinery29 to Vanity Fair have expanded their coverage to reflect technology’s pervasiveness in the culture. The audience for sports tech content is less clear. Wired in 2010 launched a standalone sports blog, Wired Playbook, that looked at how science and technology have influenced the world of sports, but since folded that coverage into what’s now its culture vertical. Other sports publishers are looking for audiences with social media in mind: USA Today Sports Media Group launched team-specific sites and a fitness vertical, Training Junkie, while Bleacher Report is emphasizing made-for-social content.

Tech coverage may not be the type to go viral, but there are highly educated sports fans that SI’s vertical could appeal to, said Chris Pirrone, GM of the USA Today Sports Media Group. “It could be a smaller audience, but highly engaged, and maybe a great demo for SI to add to its audience mix and for brands seeking to reach a more technical sports audience,” he said.

As for whether enough of those fans care about tech to justify a whole section on the topic, Stone said SI’s consumer research, combined with its own intuition, backed up its decision to launch the vertical.

The staff investment is relatively low; SI’s Richard Deitsch and a mix of four current and new staffers will write for it. Daily content also will come from SportTechie, a niche site covering sports and tech, that SI has a content-sharing partnership with.

And, undeniably, the chance to reach tech advertisers is part of the plan, although SI didn’t have any to name at launch. It aligns with a recent Time Inc. corporate sales reorganization to better go after tech along with auto and pharma advertising. “We are definitely making a run for a deeper roster of tech spenders,” Stone said.