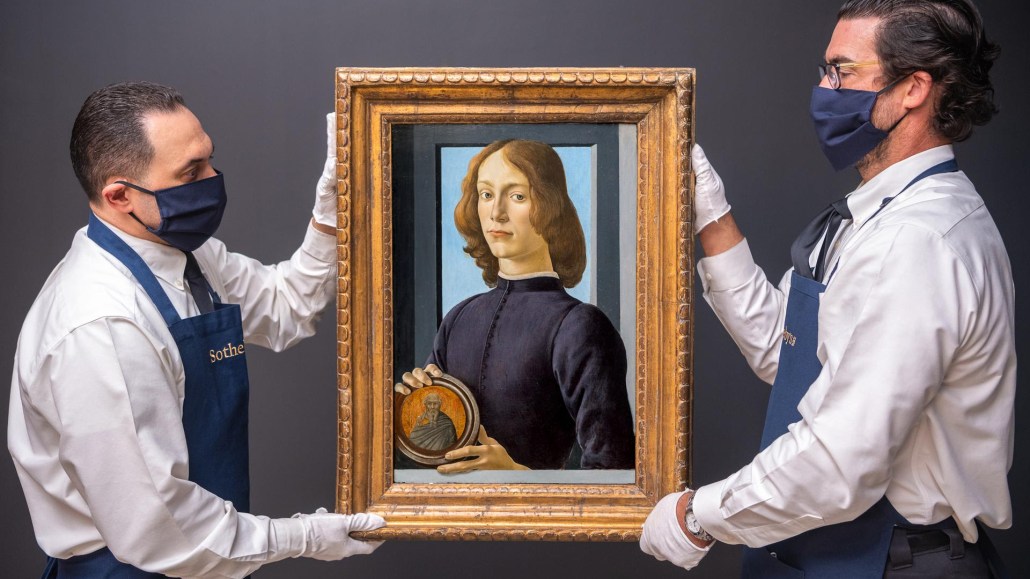 Sotheby’s auctioned off Botticelli’s Portrait of a Young Man Holding a Roundel for $92.2 million on Thursday. But before it did, the auction house gave everyone the chance to virtually hang the artwork on their walls.

Thanks to an Instagram filter Sotheby’s created with Poplar Studio, a creative platform that builds 3D and AR experiences, users could see what the Old Master painting would look like in their living rooms. The filter is available to Sotheby’s 1.3 million Instagram followers.

The filter was used 145,000 times, and was videoed or photographed 4,300 times, as of Thursday evening. The post announcing the sale currently has an engagement of 1.07%, which is slightly higher than what is considered an average engagement rate.

This isn’t the first time Sotheby’s has used augmented reality — it worked with Anthony Rubinstein, of AR Visual, to bring a 15th-century woodblock print by Albrecht Dürer, to life using animation in November of last year — and it has an augmented reality capability in its own mobile app.

And the company is seeing great success so far with the offering — art buyers who use Saatchi’s AR tool are four times more likely to purchase, said Jeanne Anderson, gm of Saatchi Art.

But Sotheby’s filter is part of the art world’s broader embrace of the technology especially amid the ongoing pandemic keeping prospective art buyers home. Home art print suppliers including Saatchi Art and Etsy introduced in-app AR art viewings in 2018 and 2019, respectively, hoping to drive sales, and both made significant improvements to their app user experience this year as consumer interest in art skyrocketed.

“Pandemic or not, consumers want AR because it fundamentally answers questions in the shopping funnel. How big is it? How does it look in my space? What are the details?” said Cacace.

But as augmented reality becomes a more common feature of the modern commerce experience, it remains to be seen how effective AR is for selling truly high-end, expensive goods.

According to research published in July 2020 by CommerceNext and Exponea, a customer experience company, more than 20% of US retailers expected to invest in AR or VR for their company’s online store in June 2020, up from 8% in January 2020. Exact figures were not provided in the study.

That retailer investment is likely the result of increased consumer adoption.

Saatchi Art rolled out its in-app AR tool “View in My Room” and then updated the feature last year to work on mobile web. “We’ve seen that collectors who use AR to inform their art purchases generally become more invested, not only in a literal sense, but also emotionally,” Anderson said.

Anecdotally, Sotheby’s claimed it received good feedback from clients who use the AR feature, but didn’t have numbers on whether using the feature increased sales. It plans on expanding its partnership with Poplar Studios to showcase other artwork.

But for now, the technology remains a good way to market its own brand. “Since people cannot come freely into our galleries like they normally would, we want to bring the Sotheby’s experience into their home,” said Derek Parsons, a spokesperson for the auction house.

“This is the most valuable Old Master painting ever to be offered at auction by Sotheby’s,” Sotheby’s said in a statement. “What is so appealing about a filter like this is that it allows art lovers to get up close and personal with the artwork, while preserving the gravitas of the work itself.”