The sunny days of hot growth for digital publishers are fading into a memory as many now face a long, dark winter.

Many venture-backed publishers are coming up to the limits of scale. Their models were based on eye-popping audience-growth figures and the presumption that business would follow. That’s not always the case. And traffic growth inevitably hits a ceiling.

At Business Insider, for example, traffic increased 10 percent to 40 million monthly uniques over the past year, following an 80 percent increase the year prior. BuzzFeed’s growth was flat this year, at 75.3 million uniques in November, after a year in which it grew 42 percent. (All figures are U.S. cross-platform figures, from comScore.) Mashable’s traffic, on the other hand, grew at a faster rate from November 2013 to November 2014 compared to a year later: 18 percent vs. 32 percent. Gawker Media, which spent most of last year in turmoil, has seen a 16 percent year-over-year decline in unique visitors.

“There’s that sense that not all of these digital news startups will see continuing hockey stick-like growth,” said Ken Doctor, principal analyst at Outsell. “Fall behind in growth, and the current value of these companies may plummet; it’s a momentum game, win or lose.”

That decline in growth for many publishers comes as Facebook has scaled back the amount of traffic it sends to publishers. Desktop and referral traffic to the top 30 publishers on Facebook dropped 32 percent from January to October this year, according to SimpleReach. Since Facebook wants to keep readers within its own walled garden, sites struggle to find new readers and get them to leave its platform. As a result, many pay to get their articles seen in people’s news feeds. BuzzFeed, for example, pays millions of dollars a year for Facebook traffic, according to internal documents leaked in August. At the same time, most of these sites are pushing distributed strategies on platforms that, at the moment, have uncertain monetization potential compared to direct traffic to owned properties. 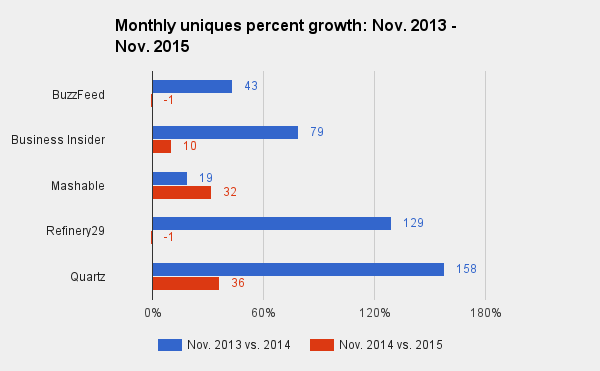 While none of these sites have yet to see significant declines in their audience numbers, their investors are in the business of pouring money into growing companies, not stalled ones. There are also signs growth is slowing on the business side at these companies. Mashable, for example, reportedly missed its sales goals this year, while BuzzFeed said it would tap the brakes on new hires.

Just before the holidays came news that Mashable has been shopping for a buyer, hoping to fetch as much as $300 million. Atlantic Media has talked to companies interested in buying Quartz, its buzzy global business news publication. That’s after a year of publishing consolidation, headlined by Business Insider’s sale to Axel Springer for $343 million.

“If you’re one of these companies and you can get out now at a valuation that is acceptable, now would be a very smart time to do so,” said Seth Alpert, managing director at advisory firm AdMedia Partners. “If I was invested in one of these businesses, I would want to exit in 2016.”

The challenges on the business side are fueled by the overabundance of publishers on the Web. Ad buyers are looking for deeper deals with a handful of partnerships, which is bad news for the sites that don’t make the cut. Digitas LBI chief content officer Scott Donaton said that while RFPS used to go out to 10-20 partners, today that number is closer to two or three. In some cases, agencies start out with only one partner in mind.

“You don’t want to be a second- or third-tier partner. It’s going to get harder and harder to break through unless you bring something differentiated, innovative and attention-grabbing. The marginal players going to have a challenge,” he said.

The forecast this winter for many digital publishers: chilly.