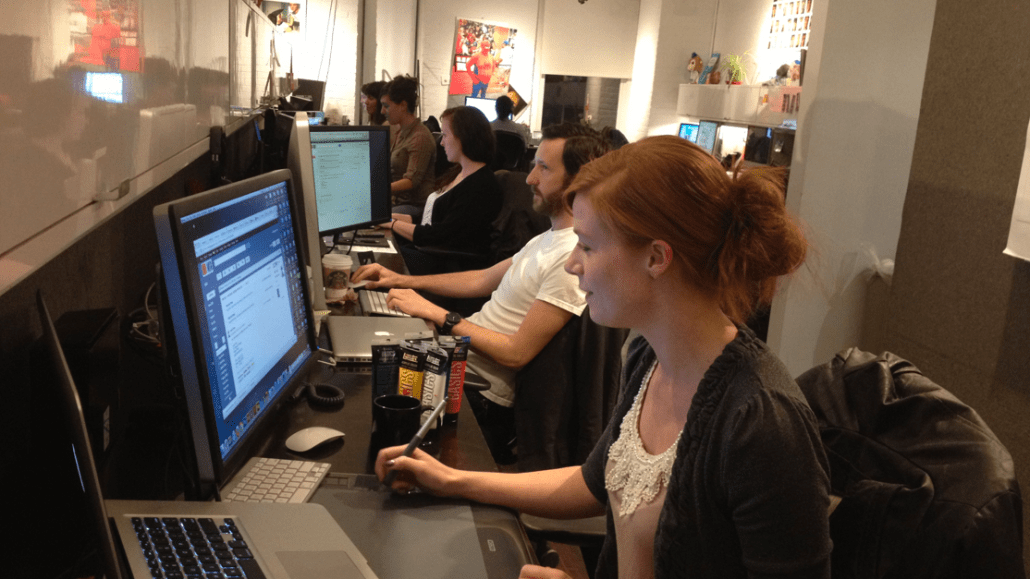 Sometimes, making an early mistake pays off. In 2009, Gawker dived head first into the custom-content creation waters with a True Blood piece of custom content and received some criticism that the branded content was too much like editorial. Three years later, custom content is all the rage, and Gawker’s got a team of 13 cranking out work that CEO Nick Denton believes will form the backbone of its revenue in the long run.

In the last quarter alone, Studio@Gawker, the company’s content services group, ran a total of 67 individual campaigns (including Microsoft, Intel, AMC’s “Walking Dead“) across its eight sites from all forms of media: sponsored posts, events, video, infographic and graphical services and display advertising. Launched in 2007 and recently rebranded, Studios@Gawker is led by Ray Wert, executive director of content, and has a staff of 12 that comprises several different departments: design, copy, events, video production and corporate communications.

“All of our brand partners are attempting to get their story across to our readers in the most authentic manner possible,” Wert said. “And they come to us to tell that story because we know how to authentically talk to our audience.”

The content, which is labeled “sponsored,” sits alongside editorial. While some publishers, like Vox Media, rely on editorial to help its content services team, Studio@Gawker is kept separate — literally, the team lives on the third floor of its building while editorial is on the fourth floor. The mandate is to adapt marketer messages to the trademark Gawker style while, at the same time, fulfilling campaign goals — no easy thing.

When selling sponsored-post concepts, the team makes sure it’s selling the idea that goes into it, not just a container. It’s about how to fill that space, not just giving a client a post. Wert, who was an editor at Jalopnik before moving over to head the content studio, brings his own sensibility to bear, having worked on the editorial side at Gawker for seven years.

The team tries to home in on not only coming up with the good idea that tells the brand story well to the Gawker audience but also how to put it back in front of the brand for the agency so that they understand it as the agency rifles through 150 RFP responses. In other words, it’s about finding that balance between giving enough information without giving all the information.

With all the back and forth between Studio@Gawker, agencies, creative shops and the brands themselves, communication is vital. Here, the sellers are very active in quarterbacking this set of downs to make sure ideas are on point with the client and get the feedback that, if need be, the team can change on the fly.

Once the brand, agency and content team hash out its plans, the IOs are signed, sealed and delivered. Gawker started an account services team this year to handle that back end communication. It used to be the copy and design team working directly with the client, and now there’s a layer that handles approvals and process, since every campaign is different. Account services acts a clearinghouse to bring everyone together. There will be an internal discussion to see who needs to talk to whom, what the next steps are, and then they’ll have an external kick-off call to talk to the brand, the agency and sometimes the creative shop.

In this discussion, the team will clearly lay out the timeline of what the brand needs to send and what Gawker will deliver. Gawker creates several calendars to maintain so that it doesn’t cross any streams. For example, if it has a homepage takeover for one client in one industry, another client in that industry doesn’t get sold that day.

From that point, it moves to production where the team will get together to assign roles and responsibilities. Designers will come in, and they’ll have an internal strategy session. So, for example, if they need a branded image for a series of posts for the splash, they’ll brainstorm that internally and create timelines for review and make sure it’s buttoned up for the overall program. The team will also look outward for production help, tapping into a pre-qualified list of vendors and a kitchen cabinet of writers they can contract, all with the goal of making sure they have the right writers for the right brand for the right brand messaging. But the reason brands like the custom approach on Gawker is that the team knows what works for the Gawker Media audience, whether that comes in the form of copy, videos, gift guides, contests, surveys or photo galleries.

“In the end it’s about the ideas; it’s about the story; it’s the thing that matters, and that’s what sets us apart from everyone else,” said Wert. “I trust in our ideas more than anything else because I know we’re thinking about it from what’s in the best interest of the brand and what will create value for our users. And being able to do that on a regular basis means I can go to bed every night knowing I did something that’s worthwhile, that I can feel good about working in advertising.”