Several publishers on Medium have seen their traffic drop

Platforms are fond of selling publishers on their reach, but they don’t always deliver.

A source familiar with Medium publishers’ traffic said that third-party providers don’t typically account for app traffic, so Medium’s reach is likely greater than third-party data indicates. However, a comScore spokesperson said their data takes app traffic into account. But either way, even with those caveats in mind, third-party data does not paint a pretty picture for the publishing platform.

Another issue is that publishers don’t always tag their content for comScore, so for some months their comScore numbers solely come from a focus group of about a million users that comScore tracks across the web. When comScore tags aren’t used, which has been the case for Medium publishers, according to one source, reported traffic is likely to decline regardless of whether actual traffic dipped. ComScore declined to specify exactly which months particular publishers dropped their tags. Medium declined interview requests.

For comScore to track a website, the audience must at least have around 50,000 monthly visitors. Some publishers on Medium, such as The Awl and Film School Rejects, have failed to meet comScore’s minimum reporting standards in recent months. 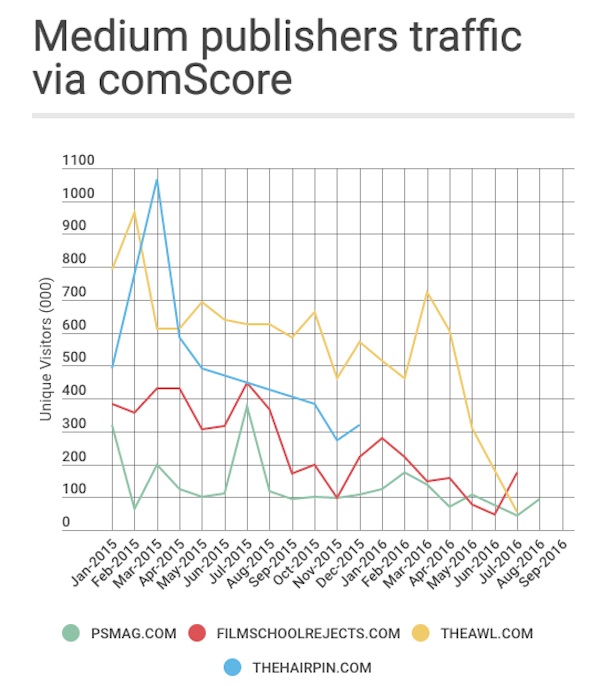 Judd Legum, ThinkProgress editor-in-chief, said that traffic dropped in August while his team adjusted to SEO and meta-tagging strategies on a new platform. But contrary to what appears in the Alexa rank, September and October brought the site 8.7 million and 9.8 million unique visitors, respectively, which are among the highest-trafficked months in the publisher’s history.

Although a good chunk of that boost came from the presidential election, it shows that “we’re not having a problem with maintaining an audience on this platform,” he said. “But it was never my intention to move to Medium to get a huge boost in traffic. [Moving to Medium was] more about having a superior technical platform. To me, I’m still responsible for growing the audience.”

This post has been corrected to show that Medium’s self-reported audience metrics are larger than what comScore reports.