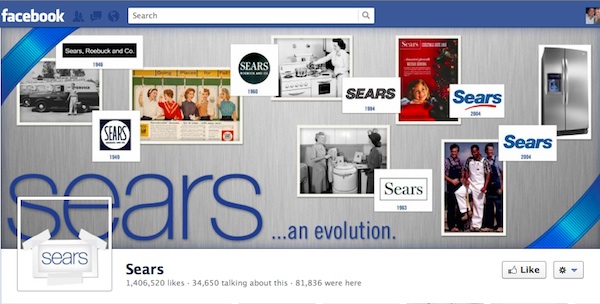 Undaunted by other retailers’ failures at Facebook storefronts, retail giant Sears Holdings announced it is taking a gamble and opening up Facebook stores for its Sears, Kmart and Sears Latino brands.

A recent Bloomberg article focused on JCPenney, Nordstrom and Gamestop closing their Facebook storefronts due to low ROI. So-called “F-commerce” was supposed to be the next big wave in e-commerce, with analysts and industry experts making forecasts that Facebook would eventually become a viable sales channel for brands and retailers. According forecasts made by Booz & Co. in Jan. 2011, physical goods sold through social-commerce platforms such as Facebook would reach $30 billion by 2015. The research firm also went as far as saying that the majority of this commerce would come from Facebook. But it seems the hype has died down, and the failures of some early adopters are casting a cloud of doubt over the industry. One Wharton business school professor even compared retailer efforts on Facebook to the rush to set up storefronts in Second Life. Ouch.

Despite all of this, Sears has rolled out an in-wall commerce feature in partnership with Facebook that is meant to streamline the communication process with customers and continue to offer them more opportunities to shop where they want, through whatever channel they prefer. The retail giant will also be rolling out a new Facebook commerce application that features top products in select Sears categories where consumers can buy, save, share, Like and comment on the retailer’s merchandise. It is literally an app-like experience built into the retailer’s Facebook page. When clicked, consumers are taken to a new page within Facebook that features Sears products.

“I’m going to start with where we start everything: the consumer,” said Michael Murray, chief marketing officer of e-commerce and online at Sears Holdings. “We have to be where our customer is, and our customers are on Facebook. We want to make sure that we are providing them with content and now commerce, if that is where they want to shop.”

Murray said that Sears’ Facebook strategy is more about giving consumers convenience and options on where to shop and less about turning Facebook into an e-commerce platform. He also said that Sears’ primary goal with its overall Facebook strategy is to drive consumers to Sears.com. According to Facebook, between the end of 2010 and the end of 2011, Internet Retailer Top 200 retailers saw a 203 percent increase in traffic from Facebook to their sites.

“Our goal is to provide customers an integrated retail experience,” Murray said. “Expect to see more from us in the tablet and mobile space [in the next 12 months], and we’ll be integrating those areas with existing initiatives.”